"I Never Think of Myself as Public.” Why Melissa McCarthy Relates to Her Reclusive New Character

Lee Israel was an extraordinarily difficult woman to like, but Melissa McCarthy loved her instantly. Not that they ever actually met; Israel, an author and literary forger, died in 2014. But McCarthy fell hard for the quintessential New Yorker depicted–in all her desperate, curmudgeonly glory–in filmmaker Nicole Holofcener’s script for the big-screen adaptation of Israel’s memoir Can You Ever Forgive Me?

“I was shocked that I so quickly cared about her, although I didn’t have a real reason to,” McCarthy says between sips of a latte on a brisk autumn day in Manhattan. Even her friends knew Israel as a bitter woman with a drinking problem–and that was before she turned to crime. Her early successes, with in-depth biographies of women like Estée Lauder and Tallulah Bankhead, had given way to poverty and isolation by the early 1990s. “I wasn’t sure why her actions weren’t matching up to how I felt about her, which really intrigued me,” McCarthy says. She became obsessed with Israel’s story, even though the script wasn’t intended for her: it was sent, instead, to her husband and frequent collaborator Ben Falcone, who has a small role as a bookstore owner.

It’s certainly the kind of tale that can suck you in: the film recounts the rise and fall of Israel’s career fabricating letters from famous wits of eras past, which she turned to after her efforts to hold down a straight job failed. But its emotional core is the fragile friendship that develops between Lee and her hedonistic, similarly destitute accomplice, Jack Hock (an elegantly declining Richard E. Grant). Two lonely, middle-aged, queer misfits who squandered their youthful potential and now have to hustle to survive, they speak each other’s language–especially after a few drinks at their favorite gay bar.

But an early incarnation of the project, with Holofcener slated to direct and Julianne Moore attached to play Israel, stalled out. Worried that the movie would never get made, McCarthy finally expressed her interest: “I said, ‘I feel like I have a very strong connection to Lee, and I think about her a lot. So I’m going to throw my name in.'” With the addition of director Marielle Heller, whose excellent 2015 debut, The Diary of a Teenage Girl, was a coming-of-age film about another complicated female protagonist, Israel’s story was saved.

McCarthy isn’t exactly known for playing gloomy (or, for that matter, literary) types. Though she got her first big break in 2000, nabbing the role of the lovably neurotic chef Sookie St. James on Gilmore Girls, it was more than a decade later that her Oscar-nominated performance in 2011’s Bridesmaids made her a household name. Since then, McCarthy’s boisterous characters and flair for physical comedy have made her not only one of Hollywood’s most bankable stars but also one of its highest-paid women. Writing many of her most successful, if not necessarily best-received, projects–Tammy, The Boss, this year’s Life of the Party–alongside Falcone, who also directed those movies, has allowed her far greater control of her image than most actresses ever enjoy.

Yet it’s hard, even sitting with her, to pin down McCarthy’s personality. It’s clear that she’s a consummate family woman; an unmistakable fondness creeps into her voice when she talks about Falcone and their daughters, 11-year-old Vivian and 8-year-old Georgette. In conversation, she’s warm and thoughtful but measured. Scrupulously charitable in her comments about others, she has even been known to extend sympathy to critics who’ve insulted her appearance, diagnosing them as unhappy. “We all do some weird thing to make us feel more secure,” she says. “And I don’t think it’s usually in our best interest.”

Though she’s embraced her role as one of Hollywood’s few avatars for plus-size women, which has sometimes forced her to absorb our culture’s ugliest anxieties about women’s bodies, McCarthy is not an activist in the traditional sense. And that’s probably prudent, considering that she’s also the rare celebrity whose appeal transcends partisan political lines, with as many fans in red states as blue. When asked a mild question about her habit of choosing projects, including Can You Ever Forgive Me?, where women wield power behind the camera, she answers carefully: “I think it rights the balance,” she says. “If you only tell [a story] from one perspective, if nothing else, it gets boring. I wouldn’t want it to be all and only women. And I certainly don’t love it when it’s 98% men.”

As McCarthy frames it, she’d rather cede the spotlight to her characters than be an outspoken figure in her own right. “I never think of myself as public,” she says. “I’ve always just been like, ‘I’m a character actress.'” By inhabiting a character, McCarthy says, “I can put a veil of someone else in front of me, and I can make very distinct decisions through them.”

In fact, that impulse to disappear into the lives of people very different from herself is something she does share with Lee Israel. “It would be so incredibly awkward to have someone say, ‘Just play it exactly how you would in your own house.’ It would rattle me with insecurities,” she says. Similarly, when Israel was writing a biography, she could hide behind her subject; she “could be witty and smart and engaging and all the things she couldn’t be person to person.” But when Israel was drafting her memoir, McCarthy notes, it pained the author to write about herself. “I thought, It’s funny; we both live through other people and feel more comfortable doing that.”

Can You Ever Forgive Me? has, inevitably, been framed as a new direction for McCarthy. Instead of a madcap caper, it’s a talky, often melancholy indie whose chances of approaching The Heat‘s roughly $160 million box-office take seem unlikely. Her Lee is an offbeat personality but not a larger-than-life one. McCarthy underplays in many scenes with Grant, letting his theatrical Jack take center stage; it’s a generous choice from an actor with such a powerful presence. And her humanistic read on Lee suffuses the character with tenderness, in a performance that is more captivating in quietly devastating scenes than it is in the film’s darkly humorous moments. By making Lee as multidimensional as any misbehaving male author might be, McCarthy pre-empts yet another round of debate on “unlikable” heroines. The Oscar buzz for McCarthy’s performance, which has already escalated to a roar, is well deserved.

Yet there’s always been more nuance to her performances than her critics tend to acknowledge. On Gilmore Girls, she tempered Sookie’s manic perfectionism with sweetness. The best comedy she’s fronted, Paul Feig’s 2015 movie Spy, cast her not as a zany wild card but as a hypercompetent CIA office drone yearning to prove her mettle in the field. Even her swaggering Bridesmaids character ultimately shows some self-awareness. “So often people present themselves in a way that is not really, truly who the heart of that person is,” McCarthy says. “That’s the main thing that always intrigues me.” From that perspective, it doesn’t seem crazy that she doesn’t think of Lee as a dramatic departure from her past roles.

The film’s ’90s New York City setting is also familiar territory for 48-year-old McCarthy, who moved to the city on a whim at 20 and, despite intending to study fashion design, quickly found her calling in the local stand-up scene. Her first apartment was a fourth-floor walk-up in Hell’s Kitchen, where, she remembers, she and her roommates “slept on the floor on a futon and had mice who ate through tin cans–which is terrifying when you think about how strong their teeth and jaws must have been.” She admits to harboring some nostalgia for those days: “I found the not so cleaned-up, shiny and pretty New York pretty romantic.” The best thing about those years, McCarthy says, was that “you could still be surrounded by all these people working three or four jobs at a time, but everyone was really trying. And you could still struggle and get somewhere.”

Can You Ever Forgive Me? can be viewed as a requiem for that transitional decade, when Manhattan was safer than it had been in the ’70s but hadn’t become the sanitized bubble it is now. For McCarthy, Lee represents a time when rent was cheap, the publishing industry didn’t have to rely so heavily on celebrity authors and an artist’s work could speak for itself. There’s dignity, she notes, in this aversion to self-promotion: “Why can’t the writing be enough?” she imagines Israel demanding. “Why do I have to sing and dance as I present it?” McCarthy herself might be interested in these questions, so relevant to a figure of her stature in our fame-obsessed present, when stars are expected to keep the song and dance going even after the curtain falls. But she’s much too polite to say so. 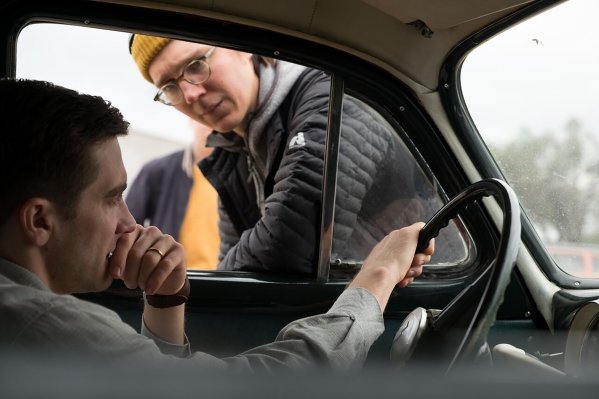 'It’s Heart Expanding.' Paul Dano on Becoming a Family Man, In Film and In Real Life
Next Up: Editor's Pick