Two 14-year-old girls become fast friends, despite their many differences, in 1974. Kate Mularkey (played as an eighth grader by Roan Curtis of The Magicians) is a sweet, awkward, nerdy horse girl with a loving family and an innate wholesomeness that follows her well into adulthood. Smart, cool, ambitious and beautiful, her new neighbor Tallulah “Tully” Hart (Ali Skovbye from The Man in the High Castle) could be the queen of their school, if only she didn’t feel so alone, with a narcissistic, burned-out hippie mom (Beau Garrett’s Cloud) who floats through the world high. Scarred by that broken parent-child relationship, Tully cherishes Kate, the only person she’s ever truly felt close to, and looks to the Mularkeys for some semblance of normalcy.

Named for the street where they grow up together and adapted from Kristin Hannah’s best-selling 2008 novel, Firefly Lane—a painfully earnest, sloppily executed but still somehow endearing 10-episode drama that comes to Netflix on Feb. 3—traces the women’s friendship from junior high through middle age in the early aughts. By that time, Tully (portrayed as an adult by executive producer Katherine Heigl) is a famous, lonely talk-show host living in a glassy Seattle penthouse apartment. Kate (Scrubs and Roseanne alum Sarah Chalke, in the kind of role Connie Britton spent her 40s playing) gave up her own journalism career for a family and a suburban home straight out of the Nancy Meyers lookbook. Now, with her marriage falling apart and her teen daughter throwing a tantrum every time Kate so much as sighs, she’s searching for work to give her life meeting.

Like the book, this drama is unabashedly sentimental—think This Is Us meets Now and Then, complete with frequent tears and parallel timelines. The least convincing of the show’s arcs takes place at a local TV station in the early ’80s, where recent college grads Tully and Kate work side-by-side with Kate’s future husband Johnny Ryan, a brooding, long-haired, hard-drinking Aussie producer and former foreign correspondent who’s played, with an unfortunate shortfall of charisma, by Ben Lawson of Designated Survivor. The professional roles and relationships within this workplace are absurd. And, perhaps because it’s such a stretch for the two 40-something leads to play characters in their early 20s (Lawson, who is in his late 30s, doesn’t visibly age in 21 years), the period costumes and hairstyles constantly threaten to overpower the performances.

If you’re looking for objects of ridicule, you’ll easily find them in every story line: bad wigs, absurd age makeup, mawkish needle drops, obvious plot twists. There are enough female rite-of-passage clichés to fill a dozen women’s lifetimes; Tully gets slut-shamed following a date rape, Kate wears white pants to school and promptly gets her first period, mothers and daughters communicate almost exclusively in accusations, every possible outcome of marriage and pregnancy is explored, there’s a feminist art show that’s all vaginas and a #MeToo incident. Johnny and the other men are underwritten to the point of becoming forgettable. Cloud is a one-note character. There’s an unforgivable interval between a cold open that shows some of the characters at a funeral and the revelation of who died (among other teases). The list of topics the show depicts without seeming to understand on even the most basic level—from media to drug addiction to the likelihood of a fancy restaurant allowing a random guest to sing multiple songs in its busy dining room—could fill a shooting script. Story lines sag in the middle of the season and get crushed into an overcrowded finale. By most metrics, Firefly Lane is simply not a good show.

Yet despite its many limitations, there’s something lovable about it. While the plot can be hysterical and the styling is off the wall, the central friendship is not just believable, but also endearing. Thanks to specific, detailed character arcs that feel true to Tully and Kate; grounded lead performances, from Skovbye and Curtis as well as Heigl and Chalke; and surprisingly decent dialogue, the genuine warmth at its core is palpable. Like the wedge of cheese it is, Firefly Lane goes down easy with a glass of wine. It may not be a sharp, dazzling Tully, but sometimes a tender, unpretentious Kate makes better company anyway. 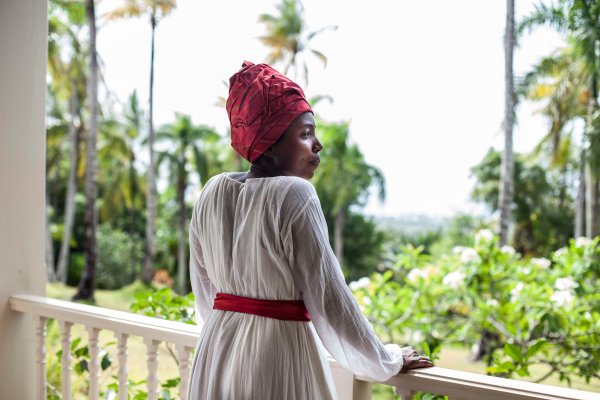 The Long Song Is a Brilliant Tale of Slavery’s End in Jamaica, Frustratingly Told
Next Up: Editor's Pick