Here's Why Roseanne's Massive Ratings Are a Big Deal for TV

Roseanne‘s return to TV after more than 20 years off air had audiences clamoring to watch the Conner family all over again.

ABC’s Roseanne revival had a two-part premiere on March 27 that drew in 18.2 million viewers with a strong 5.1 rating among adults between the ages of 18 and 49, according to Nielsen data. The debut was a smashing success, becoming the highest-rated comedy broadcast since a 2014 premiere episode of CBS’s The Big Bang Theory, according to ABC.

The politically charged lead-up to the Roseanne premiere had industry executives initially doubting the working-class family sitcom’s success. Roseanne Barr’s vocal support of President Donald Trump made headlines, and reality merged with fiction when previews of Roseanne made clear the Conners would deal directly with the divisions laid bare by the 2016 presidential election. As the first episode of the new Roseanne shows, Trump’s appeal to many in America’s working class won over the titular character, putting Roseanne at odds with her sister Jackie (Laurie Metcalf).

But that hubbub may have worked in Roseanne’s favor. “A little bit of controversy never hurts,” Paul Dergarabedian, a senior media analyst with comScore, told TIME of the show’s success. “Even if you disagree with someone’s politics, you want to see how that’s contextualized within the show.”

Viewers, especially young audiences who may have missed Roseanne‘s original run in the 1990s, were excited to tune in to see the new divisions in the Conner family. ABC reports the revival premiere brought in 10% more viewers than Roseanne‘s original series finale in May 1997, a notable feat in a time when television ratings have generally declined. The Roseanne debut even out-shined regularly scheduled episodes of This Is Us, NBC’s super-hit which has maintained some of TV’s strongest ratings since its first season premiered in 2016, Entertainment Weekly reports.

Roseanne stands out even among the countless reboots and revivals of old favorites, like Fuller House and Twin Peaks, that continue to fill up timeslots and Netflix feeds. The show’s ratings were nearly double that of NBC’s rebooted Will & Grace premiere, which attracted about 10 million viewers and a 3.0 rating among adults under 50. American Idol, another ABC revival, drew in about 10.3 million viewers in its debut.

According to Dergarabedian, the Roseanne reboot surpasses other revivals because it still feels like the old show but now has a star-studded cast, including John Goodman, who became a household name thanks to his performance in the original series.

“A big part of the draw was how they so closely mirrored the original show, from the look and feel of the teasers down to the fonts. It felt so familiar yet new,” he said.

Deadline reports that bulk of the TV markets that gave Roseanne its high ratings came from states that voted for Trump, who personally called Barr to congratulate her on the ratings success. The top TV markets were in Tulsa, Oklahoma; Cincinnati, Ohio and Kansas City, Missouri.

Depending on how ratings go for subsequent episodes, Roseanne stands to be one of the most successful shows on TV this season. Dergarabedian anticipates that the show will continue to carry the buzz in the coming weeks.

“Those who may have waited on the sidelines until now may want to see again what everybody is talking about,” he said. 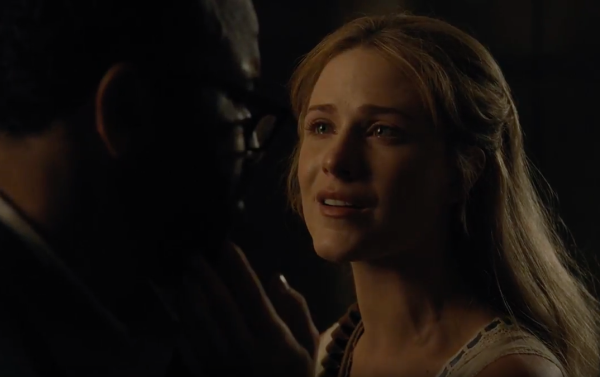 'It's Us or Them.' The Reckoning Is Here in the New Westworld Season 2 Trailer
Next Up: Editor's Pick