WandaVision Deserves the Hype. But It Penalizes Casual Marvel Viewers With Confusion

“Who’s doing this to you, Wanda?” The first time we hear this question in Marvel Studios’ debut Disney+ series, WandaVision, it emerges from the static of a 1960s radio that was just playing the Beach Boys’ “Help Me, Rhonda.” Viewers who keep up with the Marvel Cinematic Universe will likely recognize the voice of Randall Park’s character, FBI agent Jimmy Woo. If you already know all about him—as well as the show’s stars, Wanda Maximoff and her beloved, Vision—the mystery that emerges in this moment is: what’s really happening beneath the surface of what is, by most appearances, a black-and-white, mid-century sitcom? As an MCU novice, I also found myself wondering: how many movies would I have to watch to make this show make sense?

This is the paradox of WandaVision, whose first two (of nine) episodes will arrive on Disney+ on Friday, Jan. 15, with subsequent half-hours dropping weekly. Though it gets off to a slow start, the show has plenty going for it, from gorgeous, extremely expensive-looking production design and breathtaking special effects to punchy performances, a trippy mood and a plot that does eventually become quite absorbing. More meta-comedy than action spectacle, it’s the rare superhero story that could potentially appeal to viewers, like me, whose eyes glaze over when battle scenes run longer than a few minutes. Which makes it especially unfortunate that it’s one of the hardest Marvel series to follow if you haven’t visited the MCU since Black Panther.

Read More: Everything You Need to Know Before Watching WandaVision

When we meet Wanda, a.k.a. Scarlet Witch (Elizabeth Olsen, well cast as a woman both sweet and haunted), and android-with-emotions Vision (Paul Bettany, likable as ever), they’re newlyweds who’ve just moved to an immaculate postwar suburb called Westview. In a premiere that lovingly spoofs Golden Age of Television classics like I Love Lucy, director Matt Shakman (Game of Thrones) and head writer Jac Schaefer (of Marvel’s COVID-delayed Black Widow) layer on the ’50s sitcom tropes. Busybody neighbor Agnes (Kathryn Hahn, having a ball) befriends magic-wielding housewife Wanda. Disguised as, well, Paul Bettany, Vision works a vague desk job, excelling at “computational services.” Thanks to a silly misunderstanding, Wanda must impress his boss (Fred Melamed) and his wife (That ‘70s Show’s Debra Jo Rupp) by whipping up dinner with no advance notice. The episode was shot in front of a live studio audience.

The cast is delightful, the show looks great and the framing is clever—down to period-appropriate theme music by Oscar-winning Frozen and Coco songwriters Kristen Anderson-Lopez and Robert Lopez. But the premiere falls flat. Pop culture so often revisits ’50s TV, from Pleasantville to Will & Grace’s episode-long I Love Lucy tribute last year, that Wandavision initially comes off as a copy of a copy, filled with old, tired jokes about slightly older, slightly more tired jokes.

Only when the nostalgic veneer cracks and the more urgent story taking shape beyond that artificial TV world starts to shine through, in the second episode, does the series come into its own. Each new chapter pushes the pastiche forward roughly a decade in television history, and you feel that momentum. Wanda fits the mold of the supernatural ’60s wives she embodies in a tribute to I Dream of Jeannie and Bewitched, but it’s the bright red toy helicopter that she’s alarmed to discover in her yard—a tiny, vivid speck of color—that gives the black-and-white backdrop purpose. And when the TV world finally goes Technicolor, it’s at just the right moment.

By that point, I had a sense that WandaVision’s 20th-century sitcom world was some kind of alternate reality, one that Wanda seems to control, at least in part, and one that forces from a parallel realm are trying to penetrate in order to contact her. (“Who’s doing this to you, Wanda?”) But I would have reached that conclusion—and probably many other relevant ones—far earlier had I known, before watching, that Vision died in 2018’s Avengers: Infinity War. If the show gets more intriguing with each episode, its easter eggs and character teases and references to HYDRA also become harder for a casual MCU viewer to parse. Are any larger themes going to develop here, beyond the well-worn evocations of mid-century misogyny and Cold War communist paranoia, I wondered, or are we just setting up the next volume of Doctor Strange?

There are millions, maybe billions, of people who will happily consume every morsel of content that Marvel Studios (and Star Wars and the rest of the Disney assembly line) sees fit to produce. And that’s fine. I don’t avoid Marvel. When a release interests me—like Netflix’s Jessica Jones or FX’s Legion, two shows made before the MCU swallowed Marvel Television—I watch it. That should be enough for a franchise that already dominates the box office, with three of the five highest-grossing movies of 2019 to its name. It’s not even sufficient, anymore, to see every feature on the big screen; you also have to keep up with Disney+, where WandaVision will kick off a slate of 10 shows due out in the next few years that will sync up Marvel’s film and TV output for the first time. There’s something kind of unsettling about an entertainment monolith demanding such fierce loyalty of fans across all media. It’s practically an ultimatum. Marvel Cinematic Universe: you’re either with us or against us. Or else, I suppose, you’re confused. 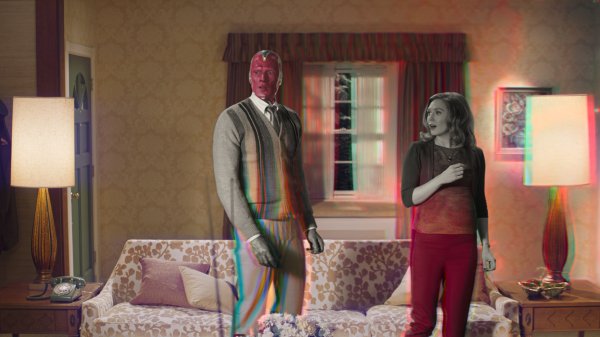 What to Know Before Watching WandaVision
Next Up: Editor's Pick