Review: Always Be My Maybe Is Maybe Almost Good. Is That Good Enough?

It’s ridiculous that Hollywood can go for 25 years without making a single movie featuring a predominantly Asian cast: That’s the number of years stretching between 1993’s The Joy Luck Club and last year’s Crazy Rich Asians, and there’s no excuse for it. But while movies need more representation of all kinds of people, we should also be demanding that those movies aspire to a certain level of quality. The Netflix romantic comedy Always Be My Maybe has so much going for it: Two appealing leads, Ali Wong and Randall Park (both of whom also wrote the script, with Micheal Golamco); an assortment of likable supporting players; and a sly, witty cameo from Keanu Reeves. Some of the writing is sparkling. Joke for joke, there’s probably just enough to keep you laughing. But if Always Be My Maybe isn’t terrible, it’s still lackluster enough to make you feel that underserved and underrepresented audiences deserve more.

Park and Wong play Marcus and Sasha, San Francisco natives who were fast friends as kids and into their teen years, but who have grown apart in adulthood. As a child, Sasha was largely left on her own by her hardworking immigrant parents; she found a welcoming warmth in Marcus’s household, and his mother, Judy (Susan Park), would let her help with the cooking: “We Koreans use scissors for everything,” she explains, snipping away at a handful of green onions as she prepares a kimchi stew.

But when Marcus and Sasha are teenagers, Judy dies suddenly. Sasha tries to comfort her best friend; the two end up sleeping together, with disastrous results. Fast-forward 15 years: Sasha has become an enormously successful chef in Los Angeles. Marcus has stayed put in San Francisco, working in his father’s air-conditioning business. At night, he plays in a band that’s going nowhere (it’s called Hello Peril), and that seems to suit him just fine; he believes his widowed dad, Harry (played, charmingly, by James Saito), needs him close by.

Sasha and Marcus reconnect, not-so-accidentally, when Sasha moves back to San Francisco temporarily to start a new restaurant. Things are rocky at first; Marcus has a loopy, artsy girlfriend (Vivian Bang, spacey and bright) who’s nice enough but all wrong for him. Sasha, recently dumped by her way-too-slick fiancé (Daniel Dae Kim), is trying to date—a possible dream guy seems dreamy, until he isn’t. Eventually, as you’ve probably guessed, the sparks reignite between Marcus and Sasha, and the sex is much better the second time around. But the story needs something to drive them apart again: Insert predictable, manufactured crisis here.

The plot points in Always Be My Maybe—the directorial debut of Nahnatchka Khan, who has worked in TV as a writer and producer—are strung together in a way that’s rote and predictable. That’s not to say that romantic comedies need an excessive number of twists; the basic formula is one of the great pleasures of the genre by itself. But you want to enjoy spending time with characters, not feeling that you’re simply stumbling with them toward some predestined finish line. Always Be My Maybe has that made-for-the-small-screen quality, almost a movie but not quite—it feels rushed, rough and a bit too casual, as if the script needed just another draft or two. The sets could have used a few more dollars thrown their way, and some of the scenes might have benefited from a few more takes. It’s hard not to feel that audiences deserves better.

Still, some of the jokes in Always Be My Maybe work marvelously. Marcus’s dad is star-struck when he sees Sasha, rich and successful, for the first time in years: “You’re like our own Asian Oprah!” And then, a beat later, he asks sincerely: “How much money do you have now?” Attending the lavish birthday party her parents are throwing for their eight-year-old godchild, Sasha reflects on her own upbringing, grousing, “Do you know what my parents gave me for my eighth birthday? Flip-flops.” And Reeves is wise, wicked and wonderful in his small role. While dining in one of those tony modern minimalist establishments, he politely quizzes the waiter, “Let me ask, do you have any dishes that play with time? With the concept of time?” It’s one of those perfectly silly lines that hangs there in space, in search of a better movie. For now, it’s parked in Always Be My Maybe, and that will just have to do.

The original version of this story misstated the background of the character Sasha’s parents. Their country of origin is never explicitly stated. 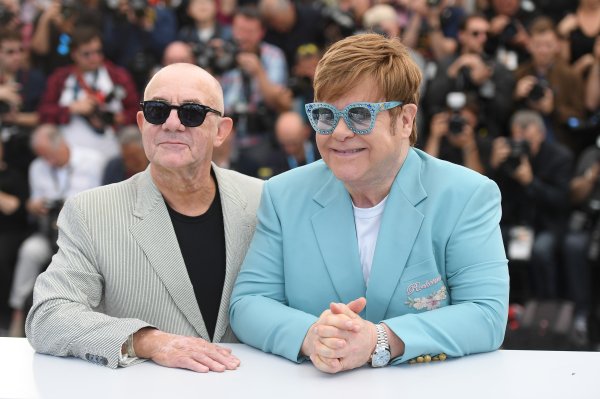 Lyricist Bernie Taupin on His 50-Year Bond With Elton John
Next Up: Editor's Pick