The Best Original Shows on Disney+—And the Worst

Disney+ has finally launched, after months—or maybe years—of hype. And while you could easily lose yourself in its expansive archive of Disney, Marvel, Star Wars and Pixar movies, the service also has plenty of original content on offer. To help you decide where to invest your (and your kids’) precious time, I’ve surveyed the lot of it to compile this list of what to watch, what to skip and everything in between.

Obviously. If you’re an adult who signed up for Disney+ on launch day, the first live-action TV show in the Star Wars universe is probably why. For fans, there’s an inherent appeal in this story, set after the events of Return of the Jedi, in which a Mandalorian mercenary (Pedro Pascal) suddenly develops a conscience and embarks on an adventure that’s sure to have an impact on the franchise at large. The big reveal at the end of the premiere has already set the internet ablaze. But even if you’re not a Star Wars person (relax, you’re among friends), The Mandalorian offers gorgeous production design, vivid world-building, an adorable baby creature and a hilariously broad performance by far-out filmmaker Werner Herzog in a small but memorable villain role. Though the first three episodes move slowly, the combination of glacial plot development and ample combat gives them a sort of comic-book feel. My only complaint is that it seems crazy to cast Pascal—whose performance as Dornish thirst trap Oberyn Martell was the highlight of Game of Thrones season 4—in a role where you never even get to see his face.

Look, it’s no masterpiece. But let’s be real: Few of us get through a full holiday season without consuming at least one silly made-for-TV movie, and Noelle is the best-case scenario for such family-oriented fluff. Set at the North Pole, it finds the Kringle clan preparing for the first Christmas after the death of their beloved Santa. Next in line for the sleigh is his son Nick (an endearingly nervous Bill Hader). As its title suggests, however, the movie’s real star is the unnervingly lovable Anna Kendrick, in a spirited but rarely mawkish performance as his sister Noelle. Frustrated by the patriarchal traditions of the Kringle empire, which leave her little to do as her relatives gear up for the holiday, she makes a genuine effort to prepare her brother for his first Christmas Eve ride. Anyone over age eight will predict the ending within the first 10 minutes, and the girl-power stuff is a little stale, but writer-director Marc Lawrence keeps the pace lively and the cast (which also includes Billy Eichner, Shirley MacLaine and Ron Funches) beats anything on Hallmark.

What’s not to like about a collection of slight but sweet, personal and visually innovative shorts from Pixar animators? Those who preferred “Bao” to the feature it preceded, Incredibles 2, should be especially pleased.

Lady and the Tramp

Did you love this summer’s uncanny valley Lion King? How about the recent Aladdin do-over starring an alarmingly blue Will Smith? No? Then you’ll probably want to skip Disney’s straight-to-streaming Lady and the Tramp, which squanders a voice cast including Tessa Thompson, Justin Theroux and Janelle Monáe; decent dialogue co-written by Support the Girls filmmaker Andrew Bujalski; and a kennel’s worth of adorable pups on yet another unnecessary live-action remake. Despite its early-20th-century period setting, the new version is clearly intended as a post-racial improvement on the rampant stereotyping in the animated original. It’s a laudable goal, but the flatness of new music composed to replace such offensive soundtrack cuts as “The Siamese Cat Song” undermines it. The story drags. And the uneven cast of live actors is no match for the pros voicing the animals.

Kristen Bell hosts this reality series, in which the casts of long-ago high school musicals come together decades later to restage the same production. It sounds like a premise that could work: poignant reunion meets behind-the-scenes theater drama. In practice, though, stuffing a dozen new characters with complicated relationships to each other, an additional cast of musical theater professionals and a culminating performance into each hour-long episode just creates confusion. Meanwhile, Bell fans should know that her participation is pretty minimal.

The World According to Jeff Goldblum

Jeff Goldblum is a charismatic guy. That, apparently, is the selling point of this Disney+ docuseries that devotes each of 12 episodes to exploring something Americans love: sneakers, ice cream, tattoos. Goldblum makes friends wherever he goes, in interviews with cutting-edge creators (yes, such people exist in the ice cream world) and everyday enthusiasts. But episodes drag, despite topping out at 30 minutes, and the host’s attempts at adding insight to what is essentially a general-interest version of Food Network’s Unwrapped yield some comically obvious conclusions.

Each episode of this series profiles a kid whose everyday heroics qualify her or him to become the star of a special one-off comic book from the folks at Marvel. These young people—an 11-year-old crusader against child abuse, a 13-year-old girl with limb differences who designs cool prosthetics for kids like her—are truly remarkable. So it’s disappointing that the show chooses to celebrate them in an overly slick style that feels more like advertising than portraiture. To borrow a phrase from another Disney franchise, the Marvel self-promotion is strong in this one.

High School Musical, the 2006 Disney phenomenon that launched the careers of Zac Efron and Vanessa Hudgens, is back—and this time, it’s extremely self-aware. This mockumentary-style musical comedy brings a production of the High School Musical stage show to the real (but fictionalized) Salt Lake City high school where the original TV movie was shot. The result is equal parts clever and sweet, with an energetic cast and a love triangle plot that’s sure to make junior romantics starry-eyed. The Series is still a bit too Disney-sanitized to have much intrinsic appeal for adults, but there are enough meta jokes to ensure that their eyes don’t glaze over.

Explainer videos abound on the internet, but this series of three-minute clips featuring the newest star of the Toy Story franchise is designed for the toddler set. Struggling to explain to your three-year-old the outsize role those green paper rectangles you keep in your wallet play in your family’s life? Forky has a video for that.

The most grown-up show in the initial Disney+ lineup, this six-part docuseries—directed by Leslie Iwerks (The Pixar Story), with narration by Angela Bassett—traces the history of Walt Disney Imagineering, the in-house creative lab that’s behind the company’s international theme-park franchise and the many Audio-Animatronic wonders that populate them. It’s fascinating to hear the stories behind game-changing rides like Pirates of the Caribbean and the Matterhorn straight from the mouths of the artists and engineers who helped create them. Unfortunately but not surprisingly, it all comes with a heaping helping of corporate propaganda, with Bassett’s voiceover whitewashing such troubling legacies as Walt Disney’s well-documented history of union busting. 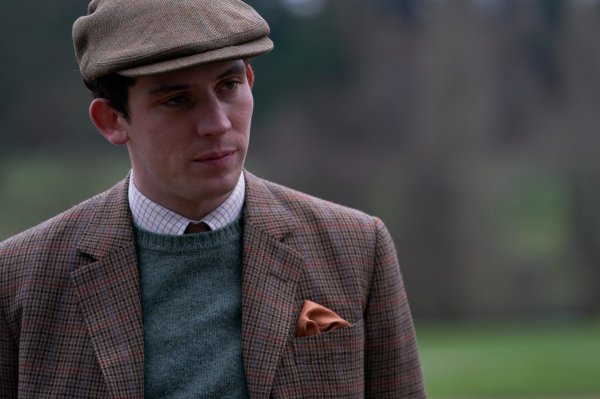 The True Story Behind Prince Charles' Storyline on The Crown Season 3
Next Up: Editor's Pick