The Only Path Ahead for Hong Kong Is Reform

Pro-China supporters wave Chinese and Hong Kong flags as they attempt to hold a march in a shopping mall but were met with large numbers of pro-democracy supporters in Hong Kong, China on Sept. 18, 2019.
Anthony Kwan—Getty Images
Ideas
By John Mak and Brian Wong
John Mak is an inaugural Obama Scholar and the founder of multiple NGOs that focus on building civil society relations between Hong Kong and Southeast Asia.
Brian Wong is a DPhil in Political Theory candidate at Balliol College, Oxford, and a Rhodes Scholar from Hong Kong. They are the founder of the Oxford Political Review.

The recent arrest of 53 activists and former pro-democracy legislators in Hong Kong marked a sudden, shocking coda to 18 months of tension. What began in 2019 as peaceful marches against a now-shelved extradition bill gradually escalated into violent protests, the ransacking of the legislature, the mass resignation of opposition politicians, the flight into exile of prominent campaigners, the imposition of the National Security Law, and early morning raids on dissidents’ homes.

How did Hong Kong get here? What’s next for the territory? Is there a way out? Non-local commentary on Hong Kong tends to offer simplified answers.

The mainland Chinese view is that the recent protests are the products of foreign interference and insidious politicking—a continuation of the Color Revolutions sponsored by the West. The solution, to them, is a crackdown on liberties and laying down the law.

Many in the West construe Hong Kong through equally dogmatic lenses. To them, Hong Kong is a bellwether of Beijing’s authoritarian ambitions, a place where the Chinese Communist Party (CCP) reveals its true stripe. They argue that this increasingly trenchant China must be resisted, not managed or negotiated with, and Hong Kong is the front line.

Read more: What Is the Future of Hong Kong’s Democracy Movement?

In practice, both views rest upon mistaken core assumptions. Beijing ignores the fact that Hong Kong’s value rests with its judicial independence, common law, and unique blend of progressive ideals and business pragmatism. None of these need be in conflict with China’s sovereignty over the city.

In expressing emphatic support for the protests, the West meanwhile ignores Beijing’s hard-wired national security fears over Hong Kong. In 2019, the CCP, and mainland Chinese citizens, were confronted with the sight of youthful Hong Kong protesters waving the Stars and Stripes as they rampaged through the streets, setting fire to businesses and enterprises perceived to be pro-government or mainland Chinese-owned. Unsurprisingly, Beijing views Hong Kong as fertile ground for a U.S.-backed insurgency.

A protestor throws a petrol bomb during clashes with police outside the Polytechnic University of Hong Kong in Hung Hom district of Hong Kong on November 16, 2019.
YE AUNG THU/AFP via Getty Images

Anyone interested in charting a viable path ahead—and the opportunity is increasingly narrow—must recognize that Beijing is hyper-defensive on the subject of foreign tampering, real or imagined. This is not without good reason. From the Century of Humiliation to the Eight-Nation Alliance and Sino-Japanese War, China is all too familiar with the ability of foreign powers to exploit pretexts to sow unrest and cause catastrophe.

Could Hong Kong become such a pretext? Beijing might say yes, pointing to the shaky loyalty of the population. A June 2019 survey conducted by the Public Opinion Programme at the University of Hong Kong found that only 11% of those surveyed identified as “Chinese,” compared to the 53% who called themselves “Hongkongers.” Just 10% of those in the 18-29 age group said “yes” when asked if they were proud to be Chinese citizens.

To make matters worse for Beijing, a small minority of desperate protesters in 2019 and 2020 repeatedly called for foreign intervention in support of the democratic cause. Ill conceived appeals were made to President Donald Trump, and senior U.S. politicians made inflammatory statements. Nancy Pelosi caused outrage in China with her description of the Hong Kong protests as a “beautiful sight”—a phrase that was seized upon by gleeful state media pundits mocking the U.S. over the recent storming of the Capitol. In the eyes of the CCP, any concessions on Hong Kong came to be seen as capitulation to America.

Certain episodes—such as the tying-up of a mainland Chinese journalist at the city’s airport, and a mob’s assault of a Mandarin-speaking private banker—were emblematic of the problematic undertones of a movement that pit Hongkongers against mainland Chinese. Such images were widely circulated among the mainland public, feeding into the narrative that the democratic movement in the city had been co-opted by foreign hostile forces, bent on splintering the country.

The Politburo’s response dynamically reflected the mainland populace’s pent-up anger, through pivoting towards more hardline stances and measures. For one, the National Security Law was introduced in July 2020, with the intention of restoring “law and order” to the traumatized city. Those aligned with the central government rejoiced at the return to “normalcy,” and an end to vigilante violence and civil strife, while others feared that the law could fundamentally undermine the city’s civil and political liberties.

Read more: Hong Kong Is Caught In the Middle of the Great U.S.-China Power Struggle

But safeguarding Hong Kong’s way of life, and Beijing’s sovereignty over the territory, need not be on oppositional terms. Elsewhere, we have written that a moderate, pragmatic and democratic path must be the way out—one that is cognizant of both Beijing’s and Hong Kong’s interests and baselines, and steers democracy ahead without transgressing China’s national security baseline. A majority of Hong Kong citizens do not seek independence—41% “strongly oppose” it, according to a Reuters survey conducted in December 2019, while 26% “somewhat oppose” it.

Hongkongers would meanwhile benefit from having an accountable, transparent, and politically electable leadership—one that has their interests in mind, but also has the trust of Beijing. That trust would enable it to preserve the values that make Hong Kong what it is, while addressing the core socioeconomic inequalities that have driven the city apart, and advancing political reform in a manner amenable to both Beijing and Hongkongers.

To be sure, this approach is difficult to sell at a time of polarization. Lines have been drawn and the conflict has taken on a Cold War dimension. Bringing about moderate democracy and sound governance in Hong Kong, while reconciling Beijing and Hong Kong’s interests, is at the very least a Herculean effort. It could well be impossible. But that doesn’t mean we shouldn’t try. 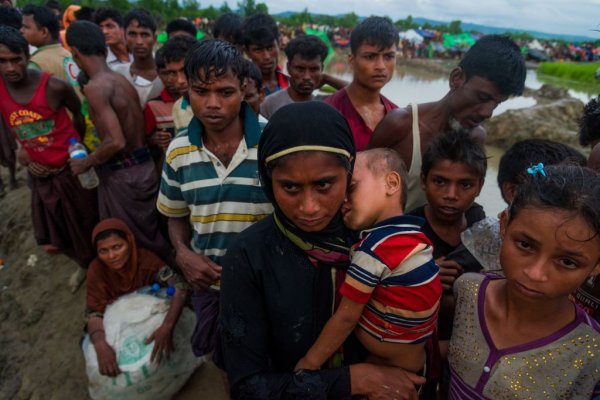 Why Joe Biden Should Help the Rohingya People of Myanmar
Next Up: Editor's Pick