Hong Kong Is a Rebel Enclave in a Sea of Totalitarianism. Welcome to the New West Berlin

President Donald Trump has never been afraid to stir up a tempest, which is why he has already indicated that this weekend he will be discussing the political crisis gripping Hong Kong with his Chinese counterpart Xi Jinping.

Chinese Assistant Foreign Minister Zhang Jun declared the topic off the table at the Group of 20 summit of world leaders, which convenes today in Osaka, Japan. Trump, however, looks set to raise Hong Kong when he meets with Xi tomorrow for a tête-à-tête on the trade war. “I’m sure this will be among the issues that they discuss,” Secretary of State Mike Pompeo said in an interview with Fox News Sunday.

For Washington, Hong Kong has emerged as the latest potential pressure point in the standoff with the world’s second-largest economy. The semi-autonomous entrepôt has been seized this month by massive protests demanding the cancellation of a controversial bill that would allow extradition to the mainland. The local government says the measure is necessary to prevent the former British colony from becoming a haven for fugitives. Detractors counter that Beijing, which resumed sovereignty over Hong Kong in 1997, will simply use the law to arrest dissidents and critics.

Intense opposition to the bill forced the city’s Beijing-appointed leader, Chief Executive Carrie Lam, to suspend the legislation, but many in Hong Kong demand its total withdrawal and demonstrations swelled to an estimated two million people on June 16. The fight has since snowballed into a broader struggle for democracy and the preservation of freedoms that differentiate the enclave from China.

Protesters in Hong Kong visited several consulates Wednesday hoping to drum up international support ahead of the G20. Some held placards reading “President Trump please liberate Hong Kong.” and “Free H.K. from China colonization.” When they reached the U.S. consulate, protesters handed over a petition asking Trump to “Back Hong Kong at the G20 Summit.”

In seizing on the G20 to elevate Hong Kong’s plight, protesters will infuriate Beijing, which insists that all matters related to the semi-autonomous territory are an internal affair. The spectacle of Chinese citizens mobilizing to repudiate the political system exercised in the rest of the country deals a humiliating blow to Xi, who has increasingly proffered up the Chinese model as a viable alternative to Western liberal democracy.

“Trump will use Hong Kong protestors’ slogan—‘Liberate us from China’—to tell Xi that the China model is not working. ‘You have a virtual rebellion in a major city in China. Don’t tell me about replacing the Western model with the China model,'” says Willy Lam, an adjunct professor at the Center for China Studies at the Chinese University of Hong Kong. “Xi has to live with the fact that the rebellion in Hong Kong is one more major defeat for China soft power.”

Many already perceive in the U.S.-led West and China-dominated East an ideological schism splitting the world into polarized economic and political spheres. As the rivalry between established and rising superpowers intensifies, Hong Kong, at the crossroads of both East and West, looks caught in the crossfire.

Like the West Berlin of old, Hong Kong has shot to the international stage with a narrative that hews close to Cold War tropes: as an oppressive Communist state squeezes its people, the citizenry cry out for Western liberation. One protester told TIME Wednesday that the struggle was a “battle between Hong Kong people and the Communist Party.” At a rally held to plead for G20 nations to intervene on Hong Kong’s behalf, a speaker from the stage declared, “We are telling the … people of the world that we deserve freedom and democracy!” while the crowd chanted “Free Hong Kong!”

Just days prior to the G20 summit, conservative pundit and former U.S. House Speaker Newt Gingrich likened Hong Kong’s freedom struggle to the “canary in the coal mine” for the future of the “Chinese Communist dictatorship.” He said on his podcast that “We as Americans should care about the outcome.”

Hong Kong: ‘A battlefield for a U.S.-China showdown’

Since Hong Kong returned to Chinese rule, it has been governed under a “one country, two systems” framework that guarantees freedoms denied on the mainland, including free speech, free flow of information, freedom of assembly and an independent judiciary. The West has long seen this city as “a catalyst of democratic values” in China, as President Bill Clinton put it in 1993.

Brian Chi Hang Fong, a comparative political scientist from the Education University of Hong Kong, notes that “The U.S. expectation that Hong Kong could be its change agent [to liberalize China] proved to be a fantasy.” Yet judging by the stream of anti-protester invective from China’s state-run media, blaming “foreign forces” and the “U.S. hand” for stirring up chaos, Beijing, as well as Gingrich, continues to believe in the threat posed by Hong Kong. “Obviously, the U.S. is trying to use Hong Kong affairs to pressure China,” the Global Times claimed in a June 10 editorial.

In 1992, with the containment of communism still high on the agenda, the U.S. passed the U.S.-Hong Kong Policy Act which granted Hong Kong special economic and trading privileges as a separate entity from the mainland—so long as the city maintained sufficient autonomy from China.

Many believe that autonomy to be eroding fast, however. The 2015 disappearance of publishers of books critical of Chinese leaders, the disqualification of pro-independence and pro-democracy legislators in 2017, and the city’s continuing inability to freely elect its own leader are all seen as proof that the territory is not enjoying the liberties promised to it when it was retroceded to China 22 years ago.

Revoking the Policy Act, and with it Hong Kong’s cherished trading status, would certainly hurt Beijing by closing a loophole through which some Chinese firms have escaped Trump’s tariffs.

“The unfolding confrontation between China’s leaders and Hong Kong’s citizens will provide fresh ammunition to U.S. hard-liners who have been advocating an aggressive stance against the Chinese government,” Professor Minxin Pei, the inaugural Library of Congress Chair in US-China Relations, writes in a June 13 essay. “Revoking Hong Kong’s privileges would advance that goal, because it would significantly hurt China.”

But the move is seen as the nuclear option because it would also hurt American business. Washington recorded a $31.1 billion bilateral goods trade surplus with Hong Kong last year, its biggest worldwide. The financial hub is also a regional headquarters for hundreds of U.S businesses and the American Chamber of Commerce here is one of the largest in the world.

Earlier this month, a bipartisan group of lawmakers proposed a halfway step: a bill that would require an annual reassessment of Hong Kong’s political autonomy in order to determine whether it is sufficient to warrant continued trade privileges. In response, Beijing summoned a senior American diplomat and complained about “interference.”

If the bill passes, “it is almost certain that China would have a strong response to this option, setting up Hong Kong a battlefield for a U.S.-China showdown,” says Fong.

A British Union Jack flag is waved from the ground as a protester uses a loud hailer to speak outside the police headquarters in Hong Kong, early on June 27, 2019.
ANTHONY WALLACE—AFP/Getty Images

The recent demonstrations in Hong Kong have posed the greatest popular challenge to Xi since he took power in 2012. The mass turnouts have forced several local government offices to close, the legislature to cancel sessions and Beijing’s proxy to announce a rare and humbling climbdown. Trump told TIME on June 17 that the Hong Kong protesters were “having a big impact.”

Hong Kong’s resistance is a particularly stunning rebuke given the Chinese Communist Party’s (CCP) significant entreaties to the former British colony, which it regards as inviolable part of China that will inevitably be reintegrated. The CCP has partly staked its legitimacy on a narrative that positions it as both the victim and vanquisher of colonial powers. Yet in Hong Kong, an erstwhile outpost of the British Empire, protesters regularly unfurl Union Jacks and the Hong Kong colonial flag above the crowds—an indication of just how distant many in the semi-autonomous enclave feel from their new sovereign power.

The freewheeling financial hub is, in fact, reprising its traditional role as a thorn in the Communist Party’s side, serving as a safe harbor for some of Beijing’s fiercest detractors and place to carry out activities forbidden on the mainland. Historically, it has provided refuge to fleeing nationalist soldiers and Tiananmen student leaders, while acting as a staging post for Sun Yat-sen’s revolution. Today, the city heaves with what Beijing would regard as treason and subversion—from students discussing Hong Kong independence to religious agitators extolling the banned practice of Falun Gong. In the run-up to a massive protest march on July 1—the politically charged anniversary of Hong Kong’s handover to China—there are real fears of confrontation between demonstrators and pro-Beijing mobs. It’s like the Cold War all over again.

Ultimately, says Thomas Kellogg, executive director of the Georgetown Center for Asian Law, “It’s up to Beijing to keep Hong Kong from becoming a real source of tension in the U.S.-China relationship—they can do this by taking a step back, and by doing a better job of respecting Hong Kong’s autonomy.”

“Beijing needs to understand that the people of Hong Kong are deeply frustrated: they’re only asking for what Beijing promised them,” he adds. “Nothing more, and nothing less.” 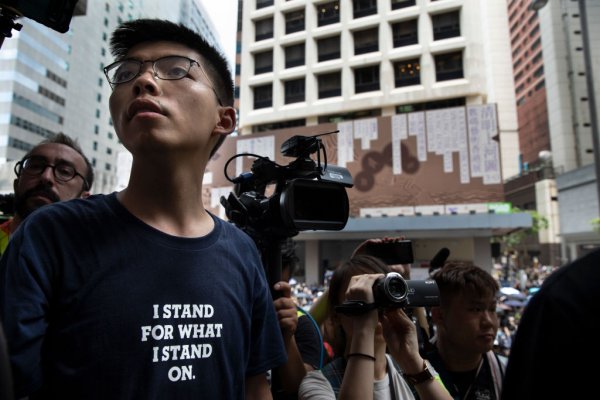