In a video appeal, a Hong Kong pro-democracy party urged world leaders assembling today at the G20 Summit to push China on a controversial bill that has ignited a political crisis in the semiautonomous enclave.

Joshua Wong, the international face of Hong Kong’s democracy movement, published the video on his Facebook page Thursday. He and two other members of his Demosisto political party appealed to the foreign nations in English, Japanese and German.

“Hong Kong has always been a safe harbor from China’s abusive system, but now the ‘World City’ is under threat,” Demosisto member Agnes Chow says in Japanese in the video, which includes trilingual subtitles.

The video comes as millions of Hong Kong residents have taken to the streets this month over an extradition bill that has now been suspended but that protesters want altogether scrapped. They blocked roads and stormed the justice secretary’s office on Thursday in the latest bout of unrest.

The demonstrators are hoping to use the G20 summit in Japan over the weekend to elevate the plight of Hong Kong, and get the political crisis put on the agenda. Earlier in the week, protesters ran a marathon circuit of foreign consulates, including those of the U.S., U.K., Japan and France, soliciting their backing in the push for greater political freedom in the city. As night fell, as many as 10,000 rallied at City Hall while representatives read out calls for the withdrawal of the bill in Korean, French, Spanish and other languages of the G20 nations. Beijing has said it would not tolerate discussions of the topic at the summit.

“The upcoming G20 summit and the meetings between political leaders and [Chinese] President Xi [Jinping] are a key opportunity to address the hard line policy from Beijing to Hong Kong,” Wong Yik-mo, a Demosisto member and vice-convener of the group that organized the City Hall demonstration, says in the video appeal. “We implore citizens of the world to deliver our concerns to your government.”

Though Hong Kong’s leader has indefinitely suspended the extradition bill, protestors continue to take to the streets to demand a full withdrawal, as well as an independent investigation into the police’s use of tear gas and rubber bullets to disperse demonstrators on June 12 and a retraction of the government’s characterization of some protestors as rioters.

In a separate call to action, Demosisto co-founder and former lawmaker Nathan Law urged President Donald Trump to broach Hong Kong’s struggle when he meets with Xi in G20.

“We hope President Donald Trump knows what matters most to Hong Kong: Our continued stability and prosperity depends on the limitation of Beijing’s interference, so we do not live in fear,” Law wrote in open letter addressed to Secretary of State Mike Pompeo.

Protestors also raised about $700,000 on a crowdfunding platform this week to run advertisements about the bill in major newspapers around the world.

Full-page calls to “Stand with Hong Kong at G20” were published in the New York Times, the Globe and Mail and Germany’s Süddeutsche Zeitung, and more are set to appear in additional papers Friday. 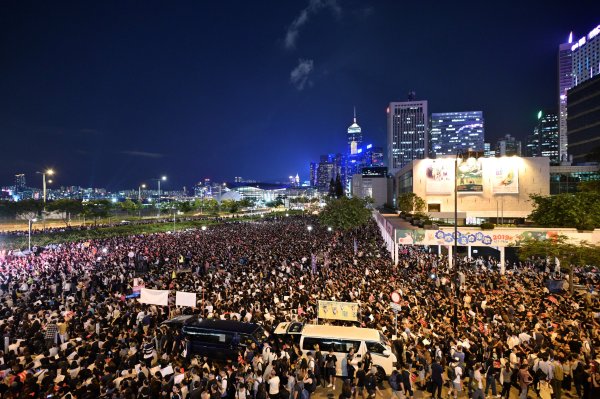 Hong Kong Protesters Call for Foreign Backing Ahead of G20
Next Up: Editor's Pick