China Has Reacted to the Storming of the U.S. Capitol by Comparing It to the Wrecking of Hong Kong's Legislature

Demonstrators use hammers to break windows at the Legislative Council building during a protest in Hong Kong, China, on July 1, 2019.
Eduardo Leal—Bloomberg/Getty Images
By Amy Gunia / Hong Kong

The storming of the Capitol by Trump supporters on Jan. 6 stunned the world and drew condemnation from politicians across the globe. In China, many watching the events in Washington D.C. immediately made comparisons to the violent occupation of Hong Kong’s legislature in mid-2019.

Protests in Hong Kong, a special administrative region of China, began in June 2019 as a series of large-scale, peaceful demonstrations against an extradition bill that critics feared would be used by China as a weapon to silence dissenters. But the pro-democracy rallies quickly snowballed into an increasingly violent and destructive anti-government revolt.

In June 2019, Speaker of the House Nancy Pelosi described the Hong Kong demonstrations as “a beautiful sight to behold.” Ten days later, on July 1, 2019—the 22nd anniversary of Hong Kong’s return to Chinese sovereignty—a crowd hundreds, if not thousands, strong broke into and ransacked the former British colony’s legislative complex. They painted obscenities on the chamber walls, trashed offices and smashed fittings, causing nearly $6.5 million worth of damage.

Their actions drew scant condemnation from Western politicians. While stating that “No violence is acceptable,” then U.K. foreign secretary Jeremy Hunt tweeted that Britain’s support for “Hong Kong and its freedoms” was “UNWAVERING on this anniversary day.”

A demonstrator places an umbrella next to a banner reading 'There are no rioters, only tyranny' in Chinese, displayed inside the chamber of the Legislative Council in Hong Kong, China, on Monday, July 1, 2019.
Justin Chin/Bloomberg via Getty Images

In an article published Thursday on its home page, China’s state-backed Global Times newspaper said: “Chinese web users still remember the distress and anger they felt when they saw rioters in Hong Kong storming the Legislative Council Complex, scrawling graffiti, smashing and robbing items, and, instead of condemning the violence, U.S. politicians hailed the ‘courage’ of these mobs.”

Supporters of the Hong Kong protests have cautioned against the making of a “false equivalency” between the Capitol siege and the ransacking of Hong Kong’s legislature. But the Global Times posted a side-by-side comparison of scenes of the Hong Kong protests and Trump protesters inside the Capitol building. “It remains yet to be seen whether [Pelosi] will say the same about recent developments in Capitol Hill,” the paper tweeted.

Ann Chiang, a pro-Beijing lawmaker in Hong Kong posted a video of the turmoil in Washington D.C. on her Facebook page. “American lawmakers can finally experience this democratic violence, and get a taste of what it is like for the legislature to be occupied,” she wrote, according to a translation by local news website Hong Kong Free Press.

“Now the U.S. mainstream media had unanimously criticized violent Trump fans in [Washington], saying it’s a violent event and those protesters are mobs, extremists … But what description did they use on the Hong Kong protest? ‘Beautiful sight’.”

Chinese state-run media also employed Pelosi’s words to criticize the U.S. government when protests swept the U.S. in the wake of George Floyd’s killing in Minneapolis, Minn. “Watch out! ‘Beautiful sight’ in HK is spreading across the US,” one Global Times headline read.

The U.S. government has passed several pieces of legislation supporting the protest movement in Hong Kong, and the city has become a political flashpoint between China and the U.S. 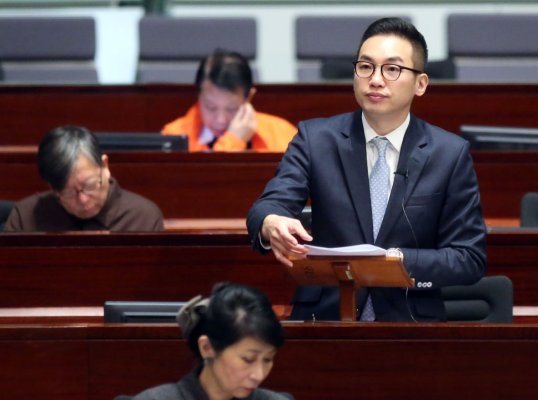