Congress is gearing up for a second impeachment of Donald Trump—just about one year after he was impeached for the first time. But now Democrats may have a more pressing aim beyond removing Trump from office for the remaining days of his presidency: to disqualify him from ever holding public office again.

Trump “warrants impeachment and trial, removal from office, and disqualification to hold and enjoy any office of honor, trust, or profit under the United States,” reads the new article of impeachment that House Democrats drafted against Trump for incitement of insurrection after he encouraged rioters who attacked the U.S. Capitol Building on Jan. 6.

But there are now just nine days left before President-Elect Joe Biden is sworn in as president. So while many lawmakers on both sides of the aisle were horrified by the Capitol siege and Trump’s tepid response, removing Trump before the end of his term wouldn’t be the most significant penalty Congress could hand down.

The Constitution explicitly says the Senate could prevent Trump, if convicted, from ever holding public office again. It would be a dramatic rebuke to the man who has dominated American politics for more than five years, reshaped the Republican Party, and has openly mused about running for President again in 2024.

Here are the answers to three key questions about the Senate’s power to disqualify Trump from holding office again.

What does the Constitution say?

Article II Section 4 of the Constitution specifies that a President must be removed from office if he is convicted in an impeachment trial. “The President, Vice President and all civil Officers of the United States, shall be removed from Office on Impeachment for, and Conviction of, Treason, Bribery, or other high Crimes and Misdemeanors,” the document reads.

There was debate during Trump’s first impeachment whether the conduct he was impeached on— abuse of power and obstruction of Congress — fell under the Constitution’s loosely defined “high crimes and misdemeanors.” In their impeachment resolution charging Trump with “incitement of insurrection,” House Democrats argue why it rises to the level of an impeachable offense. “President Trump gravely endangered the security of the United States and its institutions of government,” the resolution reads. “He threatened the integrity of the democratic system, interfered with the peaceful transition of power, and imperiled a coordinate branch of government. He thereby betrayed his trust as President, to the manifest injury of the people of the United States.”

But Article I Section 3 of the Constitution puts additional possible remedies in the hands of the Senate: “The Senate shall have the sole Power to try all Impeachments,” the Constitution reads. “No Person shall be convicted without the Concurrence of two thirds of the Members present.” It goes on to say that “Judgment in Cases of Impeachment shall not extend further than to removal from Office, and disqualification to hold and enjoy any Office of honor, Trust or Profit under the United States.”

How could the Senate disqualify Trump from further office?

First, Trump would need to be convicted in the impeachment trial, which would be held in the Senate if the House votes for impeachment. That would require 67 Senators to vote to convict him. If all the Democrats vote together, that would mean 17 Republicans would have to vote to convict him as well. (That number assumes the vote occurs after the two new Democratic Senators from Georgia are sworn in.) That’s a high bar: in Trump’s impeachment trial in early 2020, just one Republican Senator voted to convict him on the charge of abuse of power, and he was acquitted.

If Senate Democrats do manage to get those votes and convict Trump, there is some ambiguity about the separate vote that could disqualify him from public office. The Constitution doesn’t prescribe a two-thirds majority vote for that, and in the past, the Senate has used a simple majority for disqualification. (The Senate has only ever disqualified three people from holding future office, and all three of them were federal judges.)

The Supreme Court has never ruled on whether a supermajority vote of two-thirds is required for disqualification. If the Senate were to vote to disqualify a President from future office with a simple majority, it would be the unprecedented, and it could set off a high-stakes battle in the courts.

When could this be decided?

The impeachment vote in the House could occur as soon as Wednesday, Jan. 13. Timing would be tight for a subsequent Senate trial and vote to happen before Biden is inaugurated on January 20, but a President has never faced a Senate impeachment trial after he had already left office.

Some scholars argue that holding a trial after Trump is out of office would be permissible. “The special penalties upon conviction in impeachment are designed to protect the republic from the very type of people who have abused public office in such a grave manner that they should never have the opportunity to be entrusted with public power again,” Michael J. Gerhardt, professor at UNC School of Law, wrote recently in Just Security. “It would make no sense for former officials, or ones who step down just in time, to escape that remedial mechanism.”

But not all experts agree, and no court has definitively ruled on whether the impeachment process could extend after a President leaves office. Any attempt to do so could result in a pitched legal fight. 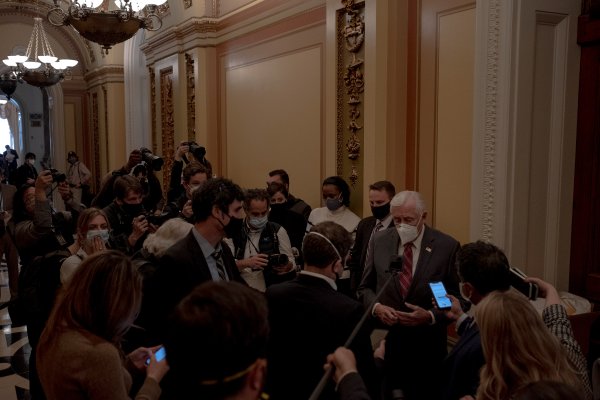 Push to Impeach Trump Puts Biden in a Bind
Next Up: Editor's Pick