“We will never give up, we will never concede!” President Donald Trump told the crowd of supporters he had summoned to Washington on Jan. 6. They heard him and obeyed. Within hours, a mob of self-styled revolutionaries waving Trump flags had stormed the Capitol. Scaling scaffolding and breaking windows, they filled the marble halls. Shots were fired inside the building as lawmakers and their staffs scrambled for cover and tear gas filled the Rotunda. For the first time since the Civil War, America would not have a peaceful transfer of power.

Before the riot interrupted it, Trump’s last-ditch attempt to steal the presidential election that he unambiguously lost was not going well. Vice President Mike Pence announced he would fulfill his ceremonial role of counting the states’ electoral votes, rejecting Trump’s demand to throw them out. The Republican Senate leader, Mitch McConnell, gave an impassioned speech rebuking colleagues who sought to disrupt the process on Trump’s behalf.

For four years, Trump’s party had submitted to a Faustian bargain. Recognizing the loyalty he commanded from voters, officials fell in line–some gleefully, some grudgingly–behind a President who pushed America nearly to its breaking point. Republicans decided that winning elections and wielding power justified ignoring Trump’s authoritarian tendencies, his assaults on the political system, his attacks on the GOP’s members and ideals. But two weeks before the end of his presidency, the price of enabling Trump–for the GOP and the country alike–became clear.

In his final bid to overturn the election, Trump browbeat dozens of Republican lawmakers into objecting to the certification of Joe Biden’s victory on Jan. 6, forcing partisans to take sides on his final challenge to democracy and the Constitution. In the process, Trump helped ensure that the GOP candidates in two Georgia runoff elections would lose by slim margins, giving Democrats control of the Senate. A party that abandoned its principles to gain power has lost both.

In the final weeks of his term, Trump ran amok. He vowed to ruin the careers of GOP officials who would not go along with his baseless election claims. He vetoed the annual military budget. He sided with Democrats by demanding $2,000 stimulus checks the GOP would not support. He painted the Georgia Senate races as rigged, prompting supporters to urge a ballot boycott. He urged “patriots” to descend on D.C. for a final showdown at the Capitol. As the chaos unfolded, Trump tweeted a limp request for nonviolence and hours later released a video telling his supporters to “go home” while praising them and continuing to insist the election was stolen.

It was fitting that Trump’s term would end with a presidential mob attacking the seat of democracy while his party’s representatives went to war with one another. His political career began as an attack on the GOP establishment, and succeeded because many in the party agreed with his revulsion for its leaders. At an election eve rally for Georgia’s Republican candidates, David Perdue and Kelly Loeffler, Trump got his biggest cheers when he went after other Republicans, from the state’s governor, Brian Kemp, to Pence. To Republicans who had rejected Trump, the party reaped what it had sown. “This is what the President has caused today, this insurrection,” said Mitt Romney, the only Senate Republican to vote for Trump’s impeachment in February, as he evacuated the Capitol. After indulging so much antiestablishment rhetoric, paranoid conspiracy theories and revolutionary cosplay, could they really be surprised that some of their supporters finally took matters into their own hands?

The consequences will continue. An entire side of the political spectrum is gripped by delusion, feuding over the irrational demands of a solipsistic demagogue, as their voters call on them to abandon democracy itself. When Congressmen respond to a lost election by insisting the system is illegitimate, “it begins to erode the basis of how a democratic republic is supposed to work,” says Meredith McGehee, executive director of the good-government group Issue One. “This is the lit match that we’re playing with at this point. Whether Trump is your pick or not, it’s dangerous.”

Before the riot, Trump egged on the crowd gathered near the White House
Brendan Smialowski—AFP/Getty Images

After Trump lost the election, Republicans comforted themselves that they still held 50 seats in the Senate. But with the victories in Georgia, Democrats now have 50 as well, making them the majority once Vice President Kamala Harris is in place to break ties. Controlling the chamber means Biden will be better able to seat his preferred Cabinet, appoint judges, tackle the pandemic and revive the economy. But he may struggle to work with an opposing party that can’t even agree on whether his election was legitimate. “Everyone understands that Republicans can’t win without some of these kooks, but they can definitely lose with them,” says Amanda Carpenter, a former aide to Senator Ted Cruz turned anti-Trump commentator. “Donald Trump is leaving the Republican Party as fractured as it has ever been.”

Some Republicans refused to support Trump from the outset, forming a “Never Trump” movement of dissident conservatives. Others tried to emphasize points of agreement until Trump made that impossible. Some were driven out of office for opposing him, but many just left: more than 50 congressional Republicans have retired since Trump took office. Most were replaced by younger, Trumpier members–the party’s future.

For those who stayed, responding to the President’s outrages became a familiar routine: either pretend it didn’t happen, or find some tortured rationale to go along. So when Trump became determined to overturn the election, he wasn’t crazy to think they’d eventually be beaten into submission, and they weren’t crazy to think this would eventually blow over like past controversies. But Trump’s obsession with the defeat only grew. When previously loyal figures like Attorney General Bill Barr refused to support him, he cast about for nuttier alternatives who told him what he wanted to hear, tweeted far-fetched conspiracy theories and lashed out at those who expressed skepticism.

It all culminated with the extraordinary congressional objection to Biden’s victory. Under law, Congress’s role is merely to affirm the Electoral College vote count certified by the states. But Trump’s demand that the GOP object quickly won the support of many House Republicans, and Senator Josh Hawley announced he would join them, forcing a debate on the floor. A dozen other Senators soon rallied to the cause. The attack on the Capitol came after an objection to Arizona’s votes lodged by Cruz, who toadied his way back into Trump’s good graces after decrying him as a “pathological liar” in 2016.

Trump’s final test caused fresh rifts in the party. Arrayed against loyalists like Hawley and Cruz in the Senate were not only relative moderates like Romney and Pat Toomey but also hard-core Trumpists like Tom Cotton and Jim Inhofe. The GOP House leader, Kevin McCarthy, lent his support to the challenge, but a surprising collection of conservative members, such as Cruz’s former chief of staff Chip Roy and the No. 3 House Republican Liz Cheney, opposed it, warning the effort could discredit the Electoral College as well as themselves.

The double-barreled Georgia runoffs were a case study in the agonies of the Trump-era GOP. Biden narrowly won the state in November, the first Democratic presidential candidate to do so in nearly three decades, powered by the forces Trump supercharged: surging turnout among Black voters and a mass migration of suburban voters to the Democrats. Neither GOP senator mustered 50% of the vote, forcing both to compete in the Jan. 5 runoffs. As Democrats Raphael Warnock and Jon Ossoff campaigned, Perdue and Loeffler watched in horror as Trump torched Georgia’s GOP establishment. Kemp and secretary of state Brad Raffensperger earned death threats for insisting that Biden had won the state. In a Jan. 2 phone call that later became public, Raffensperger endured Trump’s threats and cajoling for nearly an hour, but did not waver.

Few conservatives had illusions about who they were dealing with. “The Republican Party was a means to an end, the easiest patsy lying around,” says Michael Steele, former chairman of the Republican National Committee. “I tried to warn people: You’ve invited someone in the house who doesn’t give a damn about anyone else, much less than the house itself.”

As Trump leaves office, his party is more split and defeated than it was before he arrived. But it would be folly to predict that the embarrassment Trump has brought spells doom for Republicans. Despite his loss, Trump notched millions more votes in 2020 than in 2016 and spurred unprecedented GOP turnout. The party gained seats in the House and improved its performance with Latinos. The real threat to America may be not that this GOP can’t win elections but that it can.

The question now is how to sift through the ashes from Trump’s final conflagration. Former GOP Representative Zach Wamp, who leads a bipartisan election-protection coalition, says an America where lies can overpower truth is one where authoritarianism can take root. “I’m not a Never Trumper–I’m from Tennessee, I saw the good things the President did for four years, I’m grateful,” Wamp says. “But this is no way to go out. His legacy is going to be this brainwashing of millions of people. The Republican Party has the potential to come back strong, but we can’t have a foundation built on a lie.”

–With reporting by Mariah Espada and Simmone Shah 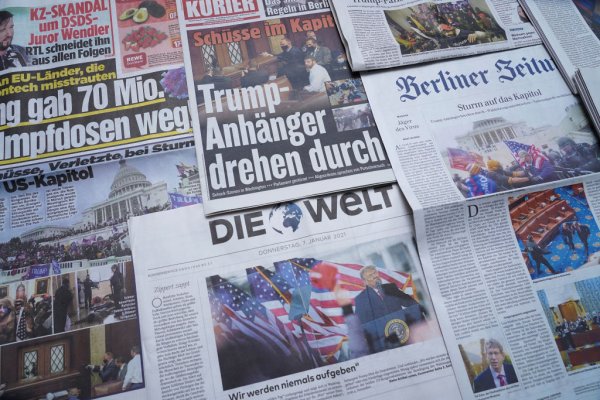 World Reacts as U.S. Capitol Breached by Trump Supporters
Next Up: Editor's Pick