'They're Jumping Ship.' Inside the Lonely End of the Trump Presidency

Donald Trump spent Thursday stewing inside the White House, as isolated and powerless as at any time in his turbulent presidency.

Democrats were pushing for his resignation, removal or impeachment for his role in inciting a mob that sacked the U.S. Capitol. White House and Administration officials were scrambling for the exits; in the past 24 hours, more than half a dozen White House staffers have resigned. His grip on Congressional Republicans, once nearly iron-clad, was already weakened before the riot, with some blaming him for the loss of two Georgia senate seats that cost the GOP the Senate.

Suddenly, a President who has dominated the party he hijacked five years ago has watched as Republicans, including many former allies, wonder whether 13 more days with him in office is an intolerable prospect. “At this moment he’s beyond toxic,” says Alex Conant, a GOP strategist.

It’s one reason why Trump was finally forced to issue his version of a concession speech: a 2 min., 41 second video posted on Twitter on Thursday night that decried the violence at the Capitol, acknowledged a new Administration would be inaugurated on Jan. 20 and said his “focus now turns to ensuring a smooth, orderly and seamless transition of power. This moment calls for healing and reconciliation.”

Even he could read the writing on the wall. Trump’s inner circle has winnowed to a tiny number of loyalists: chief of staff Mark Meadows, his personal lawyer Rudy Giuliani, his trade adviser Peter Navarro, his social media director Dan Scavino, his son-in-law Jared Kushner and his daughter Ivanka, says an informal adviser Trump speaks to regularly. “That’s about it. They’re jumping ship, man.”

Nearly every hour seemed to bring a new resignation, from Transportation Secretary Elaine Chao—the wife of Senate Majority Leader Mitch McConnell—to deputy national security adviser Matt Pottinger to special envoy to Northern Ireland Mick Mulvaney, Trump’s former acting chief of staff. The departure of Stephanie Grisham, Melania Trump’s chief of staff, was a big blow; Trump’s former communications director is close to the President and First Lady Trump and had been with Trump from nearly the start of his campaign in 2015.

During the tense hours when the Capitol was under siege, Trump lost the support of many people working for him inside the White House. “Almost every single person was just absolutely horrified and the mood was really tense” in the West Wing, a source familiar with the situation says. “A lot of people were really silent, just sitting there and watching the coverage in their offices.”

A similar loss of loyalty was apparent on Capitol Hill, where, for almost half a decade, Republicans lawmakers kept their gripes mostly silent for the sake of a conservative agenda and out of fear of a tweet that might end their career. That has suddenly changed. Trump’s most powerful allies, from Senate Majority Mitch McConnell to South Carolina Sen. Lindsey Graham, made clear that their fealty to the President had reached a breaking point. By Wednesday evening, normally vocal supporters were openly rebuking him for his role in the violence. “I do think the President bears some responsibility,” North Dakota Republican Sen. Kevin Cramer told reporters on Capitol Hill. “It was all really awful. It was pouring fuel on a spark.”

For Trump, the fallout extends beyond his political career. The mob he incited didn’t just fail to pressure Vice President Mike Pence and Senate Republicans to reject state tallies and delay certification, as he had hoped. It also laid waste to some of his ambitions after leaving office. Trump’s prospects for lucrative TV and business deals likely shattered along with the Capitol building’s windows, says an informal adviser. Just a week ago, Trump seemed positioned to be, at minimum, a major media presence and party kingmaker when he left office—if not the party’s nominee in 2024. Now, how much political clout he will command after leaving office is in question.

“The desecration of the Capitol is not going to be forgotten. He cost Sen. McConnell his leadership position, and now he’s sh—ing all over the Capitol—I think that’s a pretty strong statement about how President Trump feels about the Republican Party,” says Republican donor Dan Eberhart. “People are in absolute shock. It’s hard to overstate this.”

Trump’s grip on the party has not slackened entirely. More than 130 Republicans—including House Minority Leader Kevin McCarthy and eight Senators—objected to certifying Biden’s victory in certain swing states. And Republicans have not joined Democrats in calling for impeachment or the invocation of the 25th Amendment, scenarios that remain unlikely. Republican aides and strategists say these proclamations amount to nothing more than a messaging campaign. Pence has already reportedly refused to invoke the 25th Amendment, according to Business Insider, and it is difficult to imagine the Cabinet supporting it. Congress currently is not even in session to begin impeachment proceedings.

“We’re not in the mode of punishing him. I don’t think people are going to go out of their way to knock him,” says a senior Republican Senate aide. But cracks are starting to emerge as Republicans face life without control of the White House and the Senate. “We need to move on,” says the aide. “The party has largely turned the page.”

While Democrats and pundits have repeatedly noted the political expediency of ditching Trump now that he’s a toxic lame duck, there is an increasingly pervasive sense in the GOP that the costs of dealing with a post-presidency Trump outweigh any benefits. For some of the Republicans publicly breaking from the President, the ability to get hired after working for this administration is one factor, sources say.

“Many were seeking a soft exit anyway,” one former senior White House official says, noting that some White House staff were “hardly around” and “already moved on.” Resigning after the violence “allows some of them brownie points.” (This official, who left the White House last year, notes: “Hey I was months and months ahead.”)

A former White House official who worked closely with Trump believes the President inflamed the crowd and then lost control over what they’d do. “I can’t believe he wanted this to happen. I think he probably wanted there to be a bunch of menace and people projecting noise around him,” says the former official, who believes Trump hoped the crowds would demonstrate his popularity, send a message to Republicans that they should stick with him or face the wrath of his loyal followers, and warn Democrats that if he’s investigated after leaving the presidency, unrest may follow. “Don’t prosecute me when I leave and don’t f-ck with me,” the former official says, summing up the message he believes Trump wanted to send, “because I can marshal a bunch of people to go completely crazy.”

This is hardly the first time Trump has been engulfed in controversy over the course of his political career. One of the hallmarks of his presidency was the ability to poke the sorest spots in American society and test the limits of democracy. “I think he learned a lot of the wrong lessons by pushing the envelope so far and really not paying the price,” says a source close to Trump. “I think this time he paid the price.” 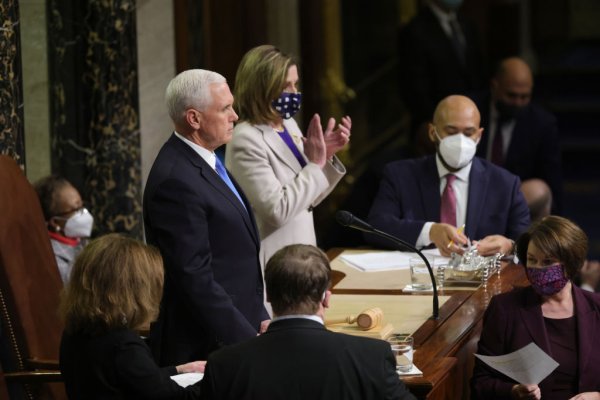