Democrats Poised to Take Charge of Senate with Georgia Victories

Democrats won control of the U.S. Senate on Wednesday, after Jon Ossoff was declared the winner in one of two Georgia Senate runoff races by the Associated Press and other news organizations. Democrat Raphael Warnock was projected to win the state’s other runoff race Tuesday evening.

Ossoff said in a speech earlier in the day that he looked forward to serving everyone in the state of Georgia, “whether you were for me or against me.”

Ossoff’s victory means that President-elect Joe Biden will enter the White House Jan. 20 with his party in control of both chambers of Congress. An Ossoff win splits the upper chamber 50-50 but, as Vice President, Harris would be able to cast a tie-breaking vote. That will smooth the path for the incoming administration’s agenda on everything from cabinet appointments to national crises, like the coronavirus pandemic that continues to surge through the U.S.

The Democratic wins also help solidify the status of Georgia, once reliably red, as a new battleground state. Biden won Georgia by less than 12,000 votes, in no small part to Democrats’ years-long organizing efforts to bring new voters to the polls.

Warnock, a pastor who spent 15 years leading a church where Martin Luther King Jr. used to preach, will be the first Black Senator from Georgia. He will also be the third Black Senator in a chamber lacking in diversity, joining Republican Tim Scott and Democrat Cory Booker. Kamala Harris, the only Black woman serving in the Senate, will move on to be Vice President later this month.

In an emotional speech Tuesday night, Warnock spoke about beating the pandemic with science, honoring essential workers and his family’s own journey. (Warnock’s late father was a pastor, veteran and small businessman and his mother previously picked cotton as a teenager.) “The 82-year-old hands that used to pick somebody else’s cotton went to the polls and picked her youngest son to be a United States Senator. So I come before you tonight as a man who knows that the improbable journey that led me to this place in this historic moment in America could only happen here,” Warnock said. “We were told that we couldn’t win this election but tonight we proved that with hope, hard work and the people by our side, anything is possible.

Loeffler—who was appointed to the Senate to fill a vacancy one year ago—has so far refused to concede to Warnock, telling supporters on Tuesday, “This is a game of inches. We’re going to win this election.”

Loeffler has said that she will support the call from some Republicans to reject the certification of the Electoral college results Wednesday in an unprecedented move to circumvent the normal democratic process. When asked whether it was appropriate for Loeffler to travel to Washington to block Biden’s victory despite the projected election results, Warnock told CNN Wednesday that his opponent has “consistently put what she perceives to be her own short-term political interest over the concerns of ordinary people and the people of Georgia rose up and they rebuked that last night.”

“What is unfolding in the Senate today, in this moment, is a distraction. These senators know better,” he added.

The Democratic victories come amid President Donald Trump’s ongoing refusal to accept the results of the November presidential election. Over the weekend, Trump called Georgia’s Secretary of State Brad Raffensperger to ask him to “find” votes that would overturn the state’s presidential election results. In an audio recording of the call first reported by the Washington Post, Trump propagated unfounded claims that the presidential race’s results were in doubt, despite having been certified by the state’s top election officials, who are Republicans.

Following attacks by Trump on state officials like Gov. Brian Kemp and Raffensperger, some members of his party worried this would depress their turnout, dissuading voters from casting a ballot if they incorrectly believed it wouldn’t be counted. Trump continued to cast doubt—without evidence—as the results of the runoff came in.

Trump also made unfounded remarks Wednesday morning that 50,000 ballots just happened to be found—insinuating fraud—in Georgia’s January election. Georgia’s voting system implementation manager Gabriel Sterling, who told TIME last month he was playing a game of “whack-a-mole” with the President’s various baseless election claims, again pushed back against the latest of Trump’s accusations. He said the President’s “actions and their statements discouraged voting by Republican voters, which has ended up hurting both of our incumbent senators.”

Sterling also said the high turnout numbers for the Senate races are “unheard of” and that the “impressive feat” of getting 100,000 people who did not vote in the November election to show up in January was likely because of an increase in Democrat voters. “That is a testament of the hard work that was done,” Sterling said during a press conference on Wednesday. “While Republicans were busy attacking the governor and my boss, the Democrats were out there knocking on doors and getting people to turn out the vote.”

Black organizers were key to the victory. “We did our part,” tweeted LaTosha Brown, co-founder of Black Voters Matter, a grassroots, progressive organization focused on increasing Black voter engagement, as results came in. Its efforts included a “Let’s Do It Again” bus tour intended to reach Black voters throughout the state in the lead-up to the runoffs. As results came in, the Cook Political Report reported Black voter turnout was high.

“We are going to continue to see a diversification of the state of Georgia,” Stacey Abrams, who ran a close 2018 race for Georgia governor and founded voting rights organization Fair Fight, told MSNBC. She credited organizers working with minority voters. “What that will signal is that any party that wants to be competitive in this state is going to have to reckon with what it means to address the issues of healthcare, of jobs, and of justice.”

Pearl Dowe, a political science professor at Emory University, tells TIME that Warnock and Ossoff’s victory offers lessons to Democrats when it comes to other Southern states.

Dowe says the Democratic party has mistakenly dismissed some states in the region for being solid red strongholds. For Dowe, Abrams was critical in bringing organizers together and providing resources in Georgia. “That is really the key. The Democratic party has an opportunity to help give money and resources to the people that are there,” Dowe says, referring to organizers that have already been working elsewhere in the South. “Don’t come in and take over, but assist them and help build that network.”

With both Georgia Democratic candidates clinching victories, Biden still won’t have much wiggle room given how narrowly Democrats will control the Senate and House, and would preside over a bitterly divided electorate. But he would be able to circumvent many of the concessions that would almost certainly be forced if Mitch McConnell retained his title as Senate Majority Leader. Recently, for example, McConnell stood in the way of $2,000 stimulus checks to aid Americans suffering from economic hardship during the pandemic, even as Republican President Donald Trump expressed support.

“The power is literally in your hands. Unlike any time in my career, one state, one state can chart the course not just for the next four years but for the next generation,” Biden said on Monday, when he appeared at a rally in the state. “By electing Jon and the Reverend, you can make an immediate difference in your own lives.”

Write to Lissandra Villa at lissandra.villa@time.com, Michael Zennie at michael.zennie@time.com and Sanya Mansoor at sanya.mansoor@time.com. 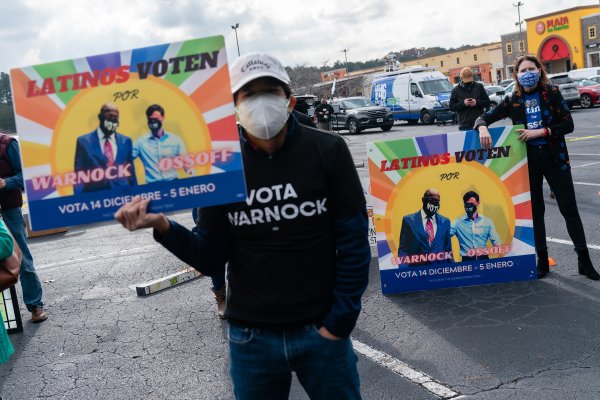 Latino Voters Could Help Determine the Winner of Georgia's Senate Runoffs
Next Up: Editor's Pick