Portuguese students joined the international movement Fridays for Future in Lisbon to protest against the climate situation amid the Covid-19 pandemic.
Hugo Amaral – SOPA Images/LightRocket/Getty Images
By Ciara Nugent

The summer of 2017 was hugely stressful for Sofia and André Oliveira, then aged 12 and 9. From their home in Lisbon, they watched a season of record wildfires and severe heat waves tear through Portugal, killing 120 people. For the children, it was already clear that the extreme heat –which scientists linked to climate change –would not be an isolated chapter in their lives. “We’ve always talked about climate change at home,” Sofia, now 15, says over video chat, sitting next to her brother at the family’s dining room table. “And we wanted to do something—something big.”

Three years later, after three more summers that broke heat records, the Oliveira children are on the cusp of a major breakthrough in their climate action. In September, aided by a still-ongoing crowdfunding effort, Sofia, André and four other young Portugeuse people filed the first ever climate-related case at the European Court of Human Rights (ECHR), arguing that governments in 33 European countries have not done enough to prevent the impacts of climate change from violating their citizens’ human rights. In a landmark decision on Nov. 30, the court announced it would take the case to the next step— forwarding it to defendant countries and ordering them to respond to the case’s arguments—and granted it priority status.

Only around 15% of cases submitted to the ECHR made it to this stage in 2019, and even fewer were fast-tracked, according to Global Legal Action Network, which filed the case. In a further good sign for the plaintiffs, the court took the unusual step of extending the scope of the case, asking, in its letter to the parties, whether climate change may constitute a violation of Article 3 of the European Human Rights Act on “inhuman or degrading treatment or punishment”—a point not even raised in their lawyers’s submission.

The ECHR’s decisions are legally binding, and if it hears the case and finds in favour of the Portuguese youth, it could order national governments in Europe to step up their emissions reductions. “The communication of this case is a momentous event. It’s the first occasion when the court has had the opportunity to grapple with climate change and its impact on European citizens,” says Marc Willers QC, a barrister at Garden Court Chambers, one of the lawyers on the case. “It seems to have decided that it can’t avoid the issue.”

André, now 12, says he hasn’t been able to avoid the issue, either. “This year there were more fires and we were afraid to leave the house to visit the countryside during the summer. This shouldn’t be happening.”

Here’s what to know about the case before the ECHR.

What is a climate lawsuit?

The field of climate litigation has been growing quickly in recent years. More than 1,300 climate-related cases have been filed since 1990, mostly in the U.S. Individuals have filed lawsuits against countries and fossil fuel companies seeking to hold them accountable for failing to cut emissions quickly enough to prevent catastrophic climate impacts. Cities, counties and states have also filed lawsuits against fossil fuel companies for misleading the public over the harmful impacts of their products.

The underlying logic of climate litigation is that proving legal liability for climate impacts, plaintiffs can legally force governments and companies to do more to cut emissions – either by making them fulfil existing targets or by forcing them to set more ambitious ones. Few cases have so far achieved favourable rulings. In January, the U.S.’ ninth circuit court of appeals threw out the country’s most high profile climate lawsuit to date, in which 21 young Americans sued the United States government for violating their Constitutional rights by taking actions that exacerbated climate change, concluding “reluctantly” that it was not a matter for the courts. But proponents of climate litigation say they have succeeded in ramping up pressure by increasing the risk of failing to act.

The most successful climate lawsuit so far was brought by Urgenda, a small nonprofit, and a group of Dutch citizens, against the Netherlands. In 2019, the Dutch supreme court ruled that the government had to ramp up its emissions cuts to reach a 25% reduction from 1990 levels by the end of 2020. As a result, the Dutch government announced a raft of new emissions-curbing measures, including scaling back coal-fired power plants.

The case before the ECHR seeks “to build on, not just replicate, the Netherlands case”, says Gerry Liston, a legal officer at GLAN. “We want to see the same action forced across 33 countries, not just one. But we also argue that states have an obligation not just to address emissions that are released within their borders, also their contributions to emissions released overseas.”

What does the case argue?

The case submitted to the ECHR argues that the climate impacts seen in Portugal are violating the rights of the Oliveira children and the other four young plaintiffs that should be guaranteed under the European Human Rights Act. In particular, Willers, the barrister says, lawyers focused on the right to life, the right to a home and family life, and the right to enjoy their rights free of discrimination. The case argues the disparity in different generations’ experience of climate change constitutes discrimination in their enjoyment of human rights, since today’s young people will experience rising sea levels, extreme heat, storms and other extreme weather events, for far longer and with greater intensity than previous generations.

The court surprised the plaintiffs’ legal team, Liston says, by raising a new issue in the list of questions it sent for parties to consider as it moved the case to the next step. The court asked whether the anxiety and mental anguish inflicted on the young people as a result of climate change could amount to a violation of Article 3 of the act, which guarantees “Freedom from torture and inhuman or degrading treatment”. “It’s an indication of how much impact the evidence has had on the court that it’s taken the step of actually asking this question to others,” Liston says.

What are the next steps?

The ECHR has given the plaintiffs and defendants until Jan. 15 to try to reach a “friendly settlement.” For the Portuguese youth, their lawyers say, such a settlement would require the governments of the countries agreeing to make deep emissions cuts. If no settlement is reached, defendant countries would have until the end of February to send comments responding to the lawsuit. Then, the court will decide whether or not to hear the case. It’s too early to tell when that will be, but the priority given to the case has made the lawyers optimistic, says Willers. “My impression is that the court is likely to take this case all the way and decide one way or another whether or not the case we’ve put forward is right.”

GLAN hopes the timing of the decision will help to ramp up pressure on the E.U. as it finalizes its 2030 emissions targets in the next few weeks. GLAN is calling for a 65% reduction over 1990 levels by 2030 – up from the previous target of 40% , and the 55% target backed by the European Commission.

André says he hopes that having a case which focuses on the human rights of children will give adults in Europe a push “to do more and do better” to solve the climate crisis. He thinks it’s long overdue. “Adults who have caused these things don’t have the courage to stand up and say “It was us, sorry, we’re going to fix it.” No, they want to leave it for the next generation.” he says. “They need to step up.” 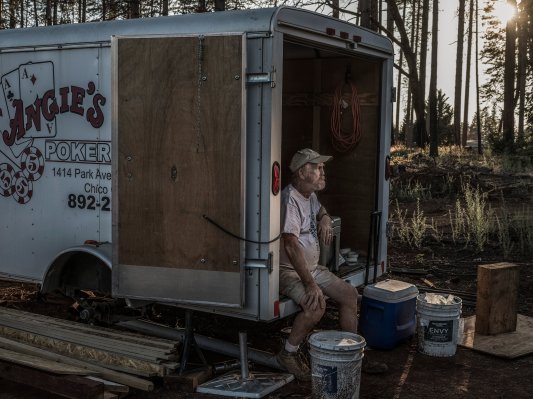 What I Learned from What Paradise Lost
Next Up: Editor's Pick