The U.S. Just Officially Left the Paris Agreement. Can it Be a Leader in the Climate Fight Again?

Hours after Donald Trump announced that he will withdraw the U.S. from the Paris climate agreement on June 1 2017, hundreds in New York City protested in the streets.
Michael Nigro –Pacific Press/LightRocket/Getty Images
By Ciara Nugent

Now ratified by 189 countries, the Paris Agreement is the most important international accord on combating climate change. It sets a central goal of limiting global average temperature increase to well below 2 degrees Celsius over the pre-industrial era—a threshold at which the impacts of climate change become catastrophic for life on earth. Under the Obama administration, the U.S. was central to negotiating the deal five years ago.

But in June 2017 President Donald Trump announced his intention to pull the U.S. out of the agreement, arguing that its rules, which require countries to set national goals for cutting emissions, “[disadvantage] the United States to the exclusive benefit of other countries”. Under the terms of the agreement, countries had to wait until three years after the pact entered into force in November 2016 to make plans to leave, and then a further year after their official notification. By chance, that brought the U.S.’ formal exit date to the day after the 2020 presidential election—which has so far returned no clear winner.

Until today, U.S. representatives have been allowed to take part in Paris-related talks to offer technical expertise but it has lost its leadership role on climate action, says Kelley Kizzier, associate vice president for international climate at the Environmental Defense Action Fund, who has served as an E.U. negotiator for the Paris Agreement. “But on a political level, the U.S. has essentially been a no-show since 2017.”

The American withdrawal has not only hurt climate action in the U.S. itself, but the agreement as a whole. “It created a leadership vacuum and left doors open to more obstructive voices [in U.N. climate talks], with some actors empowered by the Trump administration,” Kizzier says. It also contributed to lowering ambition among some Paris signatories, she adds, with many countries failing to scale up their emissions targets as they were due to this year.

Future presidents may wish to change the climate course that President Trump has set. On Wednesday night, as the count continued in key battleground states, Joe Biden said that, if elected, his administration would rejoin the Paris Agreement “in exactly 77 days”. But as other world powers pull ahead on policy and innovation, is it too late for the U.S. lead the world on climate change?

What would it take for the U.S. to rejoin the Paris Agreement?

Technically, not a lot. To rejoin the Paris Agreement, a president would have to issue a formal notification to the U.N., and would be able to rejoin 30 days later.

But to become a bonafide member of the agreement—and regain the trust of the international community—the U.S. needs to do a lot more than send a notification. All parties to the deal are due to submit new emissions targets—known as nationally determined contributions (NDCs)—before the next U.N. climate summit in Glasgow in November 2021. (The summit had been due to take place this month, but was delayed because of the pandemic.) If a Biden administration wanted to put the U.S. on track to become a climate leader again, he’d need to come up with “an ambitious and credible NDC”, Kizzier says. “Ambitious meaning in the range of a 45% to 50% reduction in greenhouse gas emissions on 2005 levels by 2030, a level commensurate with Europe.”

Being “credible” will be just as difficult for the U.S. Its withdrawal from the Paris Agreement is not the first time the U.S. has abandoned an international climate accord it helped to negotiate—the U.S. never ratified the 1997 Kyoto Protocol on greenhouse gases, either. “Given that the world has watched that happen twice, this will require more than the sweep of a presidential pen,” Kizzier says. The U.S.’ new emissions target would need to show how it will reach its emissions reductions with as much detail as possible, citing specific policies and legislation. “U.S. commitment needs to go beyond the White House, with action and support from congress too.”

Has its withdrawal from the Paris Agreement stopped the U.S. from taking action on climate?

Not entirely. In response to Trump’s withdrawal from the agreement, other actors stepped up to make climate commitments. More than 500 cities and counties across the U.S., and 25 state governors, have formed a coalition, along with thousands of businesses, universities and others who are working to reduce emissions on a local level in line with the Paris agreement. This group now represents “almost 70 percent of U.S. GDP” and 65 and “more than half of U.S.” greenhouse gas emissions, according to the America’s Pledge, the coalition grouping these entities together.

But on a federal level, the Trump administration rolled back more than 100 environmental and climate regulations, and slashed funding for climate programs and research. U.S. emissions have been failing over the last four years, as they have in other developed countries, as renewable energies and natural gas became cheaper and displaced fossil fuels. But the U.S. is not on track to meet its Paris commitment of cutting greenhouse gas emissions by 26% from 2005 levels to 2025.

U.S. willingness to take part in international efforts to fight climate change has fallen away. Aside from leaving the Paris Agreement, the president blocked diplomatic resolutions on climate at the G20 and cut contributions to the U.N.’s Green Climate Fund.

That’s left the country unable to take advantage of valuable economic opportunities, says Andrew Light, a former state department official in the Obama administration and a professor of public policy at George Mason University. A 2016 report by the World Bank’s International Finance Corporation found that the Paris agreement would trigger $23 trillion worth of investment opportunities in emerging market economies in sectors like renewable energy and sustainable forest management. “If the U.S. stays out of the agreement, the rest of the world is going to gobble up all that opportunity and all the jobs that come with it,” Light says. ”The U.S. won’t benefit from those markets and it’s going to become a pariah nation on this.”

How would U.S. re-entry to the Paris Agreement realign the balance of power on climate?

The E.U. and China have stepped in to fill the leadership role abandoned by the U.S., setting landmark climate neutrality goals, and, in the E.U. case, laying out a radical Green Deal plan. Both countries have taken leading roles in U.N. negotiations.

Europe is still hoping for an eventual U.S. return to the Paris agreement, though, according to Rachel Kyte, dean of the Fletcher School at Tufts and a former vice president of climate at the World Bank. “The geopolitics of the world could be rewritten [as the climate changes],” she says. “You want every major power at the table when you’re going to go through that kind of transition.”

If the U.S. does not re-engage with the international fight against climate change, it could find itself on a collision course with other world powers. E.U. leaders are considering implementing a carbon border tax, which would effectively tax products imported to member states according to their carbon footprint. That would disadvantage businesses in countries with weaker climate policy. “When we’re dealing with a global bad, such as carbon, it is difficult to imagine how a major power can sustain a position whereby you will benefit from not engaging on the issue,” Kyte says.

For international climate leaders, the “real power” of having the U.S. as an ally—aside from the significant emissions cuts it could make domestically—lies in its ability to use investment and other finance to drive climate action in other countries, Light says. And, as a major investor in development banks like the World Bank and regional Development bank’s, the U.S. can also use its influence to stop investments in fossil fuels—as the E.U.’s development Bank has been doing.

As the U.S. has receded from a global leadership role, and scaled back its investments in other countries’ development, China has pushed forward with massive expansions in Africa and Latin America. And, though the country has pledged to reach climate neutrality at home before 2060, it has not always prioritized the climate abroad. As part of China’s massive Belt and Road infrastructure initiative, Chinese companies are involved in hundreds of projects to generate power from coal—the most polluting fossil fuel—in 25 countries. “Europeans know that offering developing countries a non-fossil alternative to the infrastructure investment they can get from China right now becomes a viable prospect with the United States,” Light says, “And it’s an incredibly difficult prospect without the United States.“

With reporting by Justin Worland 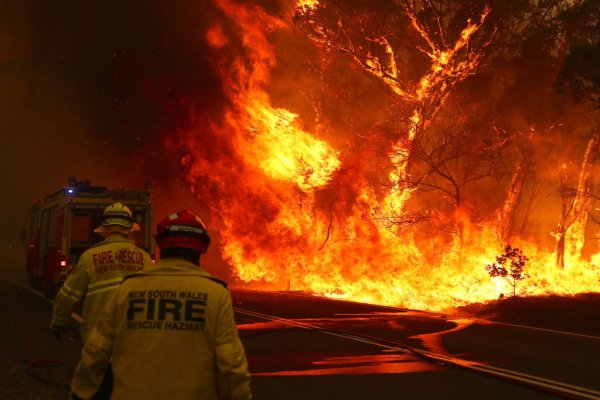 Australia's Bushfires Burned Area Twice the Size of Florida
Next Up: Editor's Pick