Climbing a snowcapped mountain in the predawn light, Saúl Luciano Lliuya says he could sense something changing. All his life, pristine glaciers have nestled between the peaks surrounding his hometown in the Cordillera Blanca region of the Peruvian Andes, providing water, work and beauty. “Now you can see it,” he says. “They’re disappearing.”

The region’s glaciers are receding rapidly; as temperatures rise, thanks to greenhouse gases trapping heat in the earth’s atmosphere, ice accumulated over thousands of years has melted away in a single generation. Between 30% and 50% of glaciers in the tropical Andes have disappeared since 1976. As they melt, they are dumping water into the Palcacocha lake, a few thousand feet uphill from the city of Huaraz, creating a troubling flood risk. In 1941, when a huge chunk of glacier broke off and plunged into the Palcacocha, it created a wave that swept 1,800 people to their deaths. The level of the lake is now higher than it was then, and 50,000 now live directly in the water’s anticipated path.

Angry about the risks facing his community, in 2015, Lliuya took a drastic step. He traveled 6,600 miles to Essen, Germany, and filed a lawsuit against energy company RWE, Europe’s largest carbon emitter. “We were paying for something we didn’t cause,” he says, sitting in his lawyers’ bright and airy offices in Hamburg.

Lliuya claims that because research by the Carbon Disclosure Project and the Climate Accountability Institute says RWE is responsible for 0.5% of global greenhouse-gas emissions, it should pay for 0.5% of the cost of flood defenses for Huaraz: about $20,000. The suit was initially dismissed in Essen. But in November, a higher court in Germany ruled he was on sound legal ground and agreed to hear the case.

The lawsuit has turned Lliuya, a mountain guide and farmer, into the reluctant public face for a burgeoning climate-justice movement. For years, communities and NGOs have been suing governments for failing to regulate carbon emissions. But over the past two years, legal challengers have begun taking the fight directly to energy companies, arguing that an industry that has created vast wealth by exploiting natural resources should use some of its revenues to help mitigate the human consequences of its activity.

“Global warming is happening, and we are seeing the effects more and more every day,” says Mojib Latif, a meteorologist and author for the Intergovernmental Panel on Climate Change. “At some point you have to ask the question: Who is responsible? Who is going to pay?”

In the U.S. alone, 13 cases have been filed since 2017. Plaintiffs tend to be communities or large organizations; in California two counties and a city are suing Chevron. In the Netherlands, charity Friends of the Earth says it will take legal action against Shell. So far, Lliuya is the only one going it alone.

Before he flew to Hamburg in 2015, Lliuya had never set foot outside Peru. Three years later he and his wife Lydia seemed a little out of place as they sat in the bright yellow halls of a high school in the German city of Kassel on a mild September Saturday afternoon—him in a hiking jacket zipped up to his chin, her in the thick tights and tall bowler hat worn by women in the Peruvian Andes.

They were in town to accept the Glass of Reason, an award given by local residents to “people who think outside the box to change the world,” says committee chairman Bernd Leifeld. Established a few months after the reunification of Germany in 1990, previous recipients include NSA whistle-blower Edward Snowden and Chinese dissident artist Ai Weiwei.

The prize givers celebrate Lliuya as “a modern David” to RWE’s Goliath. But as he addressed a crowd of curious German teenagers at a youth symposium on the eve of the ceremony, he offered little in the way of inspiring speeches. “Some people have called me crazy,” he said. “But the mountain is everything to us. If you’d seen what’s happening to it, you’d do the same thing.”

Lliuya’s lawsuit follows a strikingly straightforward logic. It is based on a nuisance law in the German civil code normally used in disputes between neighbors. It says that if you’re doing something that causes damage to another person’s property, even if it’s legal, you have to either stop what you’re doing or take responsibility for preventing the damage. Normally that means, for example, making someone cut down a tree that is at risk of falling on their neighbor’s property. The court ruled it could apply to RWE’s carbon emissions potentially damaging Lliuya’s home. In 2017, researchers at the Climate Accountability Institute and the Carbon Disclosure Project found that 71% of global greenhouse-gas emissions since 1988 were produced by just 100 energy companies, including RWE.

Lliuya’s legal case is being backed by nonprofit Germanwatch, which he heard about through a tourist he guided around the Cordillera Blanca. “Twenty-three years of climate-change negotiations have taught us that the political process for getting companies to cut emissions is too slow to save the planet,” says the NGO’s board chairman Klaus Milke. “To speed it up, we need leverage.”

But many doubt there is enough evidence to link a particular instance of climate change to a specific company like RWE. “Science is pretty clear that we’re not able to say that a particular glacier melting is caused by the climate changing as a result of CO₂ emissions,” says Douglas Crawford-Brown, former director of the University of Cambridge’s Centre for Climate Change Mitigation Research. “And we’re nowhere near being able to say that the loss of a glacier is due to a particular source of the emissions.”

Roda Verheyen, the lawyer leading Lliuya’s case, says that is not their intention. “We’re not saying RWE’s individual emissions caused the glacier to melt,” she says. Based on evidence from Latif and other scientists, Verheyen argues that carbon dioxide emitted by RWE has contributed to raising the probability of extraordinary events like glacier melt or breakages threatening Lliuya’s home. “That is not just, and my job is to see what we can do about it.”

In September, the court appointed two experts in hydrology, the science of water flows. Over the coming months they’ll assess the risk to Lliuya’s home, the role of climate change and to what degree RWE is responsible. The outcome largely rests on their conclusion, Verheyen says.

Guido Steffen, a spokesperson for RWE, says Lliuya’s claims have no legal basis and that under German law, “individual emitters are not liable for universally rooted and globally effective processes like climate change.” He adds that RWE is abiding by German and European goals on emission reduction and is taking steps to reduce its emissions by 40% to 50% by 2030. “We think of climate change as a global social and political issue,” he says. “It is national governments and international agreements, such as at the U.N. climate conference, that have to develop instruments to reduce carbon dioxide.”

That was a U.S. court’s judgment in one of the most famous climate-justice lawsuits to date. In 2009, Kivalina, an Alaskan village predicted to be underwater within a decade, sued Exxon-Mobil and 23 other oil and gas companies for the cost of relocating its 400 residents. A U.S. district court dismissed its claim on the grounds that climate change is a political, not a legal, matter.

If Lliuya wins his case, it might set a significant legal precedent in Europe. But even the lower court ruling was a valuable win, Verheyen says. “[It] established that individual responsibility for climate change exists in German law, and I think it could apply in other jurisdictions,” she says. “If we lose now, it’s on details.”

Climate-justice advocates like to compare their movement to the early wave of lawsuits brought against tobacco companies in the mid–20th century after medical journals began to publish studies linking cigarette smoking to increasing lung-cancer rates. Over four decades, some 800 individuals and 40 U.S. states filed claims, eventually achieving vast payouts and restrictions on tobacco advertising. “Those cases went on for years before there were positive verdicts,” says Noah Walker-Crawford, a climate activist who acts as Lliuya’s translator. “But eventually tobacco companies had to admit that smoking does cause cancer. They had to take responsibility.”

For Lliuya, a victory would give him and his family a measure of justice. But it would do little to soothe their worries about the risks to their home today. “We’re facing a catastrophe,” Lliuya says. Even if they manage to protect Huaraz from floods, the loss of the glacier and the drying out of lakes may one day leave the city without a water source. “The people who caused these effects aren’t doing anything about it,” he says. “Someone has got to.” 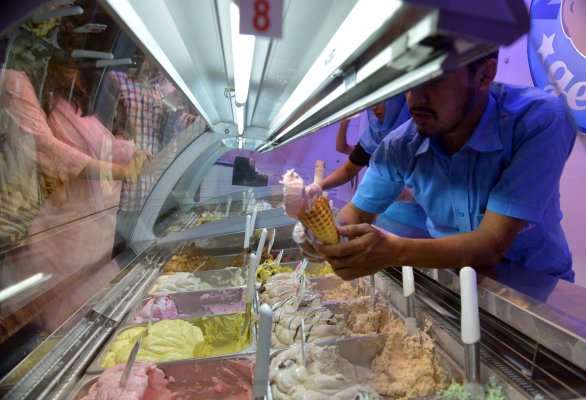