This year’s string of climate catastrophes is hard to miss. During the 2020 presidential campaign, more named tropical storms made landfall in one U.S. hurricane season than ever before. For the first time this century, a single wildfire burned more than one million acres in the lower 48 states. By September, the country had tied the record for the most billion-dollar weather and climate disasters in one year, with four months still to go before 2021.

As the country burned and flooded, Joe Biden leaned into climate change more than any other general-election presidential contender in U.S. history. Now, even as he faces the possibility of a divided Congress, Biden is expected to place reducing greenhouse-gas emissions close to the center of his presidency, incorporating the issue into policy-making decisions across his Administration.

While campaigning, Biden repeatedly labeled climate change as one of four urgent crises—alongside the COVID-19 pandemic, the economic collapse and racial justice. Those issues were the only four listed on the Biden transition website in the hours after the election was called in his favor. By using the nation’s emission-reduction program as a means to address each of those challenges, the future Biden Administration is poised to place climate change at the center of U.S. politics.

Among its many planks, the Biden campaign’s platform called for creating one million new jobs in the auto industry and electric-vehicle supply chain; spending billions on research and development of clean-energy technology; and supporting farmers who rethink agricultural production. “It’s not just an environmental plan or a climate plan,” says William K. Reilly, who served as Environmental Protection Agency administrator under George H.W. Bush. “It is very significantly connected to an industrialization and economic development plan, an infrastructure plan created as a result of a new energy economy.”

Joe Biden speaks about climate change and the wildfires on the West Coast at the Delaware Museum of Natural History in Wilmington, Del. on Sept. 14, 2020.
Drew Angerer—Getty Images

Still, campaign plans are wish lists subject to changes, whether that’s watering down or straight-up dismissal by the political process. Indeed, the Biden Administration will face challenges implementing its agenda given the makeup of the Senate, where Democrats will have a slim majority in their best-case scenario. That reality may foreclose some of the party’s biggest ambitions.

But analysts nonetheless believe a significant stimulus bill—which may be on the docket for early next year—could offer a vehicle for getting climate priorities through Congress. Stimulus measures can attract lawmakers with funds for states and districts, and many Republicans, who might otherwise vote against a new regulatory program, may support spending to buttress the economy. Crucially, the stimulus could serve as a Trojan Horse of sorts, allowing climate provisions to pass portrayed primarily as economic measures to garner GOP support.

Beyond stimulus spending, policy experts expect the new Administration to look to federal agencies to implement a vast climate agenda. On the campaign trail, Biden called for the U.S. electric grid to be carbon-free by 2035, and to eliminate the nation’s entire carbon footprint by 2050, affecting everything from airplanes to cement. A range of policies would support those targets, including restoring the 100-plus climate and environmental regulations the Trump Administration has undone on everything from vehicle-emissions standards to methane emissions. The President-elect has also promised to rejoin the Paris Agreement immediately upon taking office. (On Nov. 4, Trump officially left the landmark 2015 emission-reducing pact that nearly 200 countries have agreed to follow.)

Climate policy won’t just come from the obvious agencies — think of the Environmental Protection Agency and Department of Energy — that have crafted climate rules in the past. Indeed, the possibility of a divided Congress will likely make an all-of-government approach to climate regulation even more important as Biden looks to address warming despite limited congressional appetite. Biden is expected to consider everything from using federal procurement dollars to advance low-emissions vehicles to creating new rules on how major companies assess climate risk, both of which he can do fairly quickly without Congress. Other key policies he may enact without legislative approval include limits on fossil fuel production on public lands, directives to prioritize environmental justice considerations and a range of efficiency and emissions standards.

To enact and guide its agenda, the Biden Administration will lean on an alliance of climate activists, organized labor and racial-justice advocates, a remarkable change from just four years ago when progressive groups criticized Obama for not going far enough, fast enough. Climate advocates hope that Biden’s work with these groups during the campaign will generate momentum and create pressure for politicians in Washington to act. “Biden reflects the change of politics, and the change of politics came from not just one organization, but a whole movement of people,” says Tamara Toles O’Laughlin, North America director at the climate group 350.org.

An open question remains exactly how Republicans will respond. A small but growing group of Capitol Hill Republicans have dipped their toes in the water on climate policy in recent years, calling for small-bore programs to address the issue, and a growing chorus of business leaders calling for clear-cut climate rules could push them further. Business Roundtable, the influential business lobby that represents CEOs of some of America’s biggest companies, has called for a price on carbon and endorsed steep emissions cut. Even the U.S. Chamber of Commerce, the Republican-aligned corporate lobby, has called publicly for climate policy. But it remains to be seen whether this rhetoric translates into lobbying behind closed doors. And, in any case, the gap between Democrats and Republicans remains wide with most observers not seeing a grand compromise on the horizon without a dramatic change in GOP attitudes.

Biden can also expect broad support from American allies in Europe and Asia. While rejoining the Paris Climate deal requires little more than a signature, restoring the U.S.’s position at the center of global climate efforts will take more work, and U.S. allies will likely be encouraged by the Americans’ return to the fight. As Trump denied and deflected on climate over the past four years, the rest of the world pushed ahead. The E.U. committed to eliminating its carbon footprint by 2050, planning to spend €1-trillion to reorient its economy with climate change at its center. China has integrated the issue into industrial planning, saying it will be carbon-neutral by 2060. “The world has moved on,” says Helen Mountford, vice president for climate and economics at the World Resources Institute. “A lot of other countries have stepped up into leadership roles.”

Damage to a neighborhood by Hurricane Laura outside of Lake Charles, La., on Aug. 27, 2020.
AFP/Getty Images

Ahead of the talks that led to the Paris Agreement, the U.S. launched a diplomatic blitz to convince the world that its domestic climate regulations would endure under any future President. Trump broke that promise, and the rest of the world may well look at American assurances with skepticism. If the Biden Administration succeeds in restoring U.S. climate credentials, it could help catalyze a global shift away from fossil fuels, using U.S. wealth and influence to persuade developing economies to follow its lead, and creating space for collaboration with China following four years of increasingly hostile relations. “We’ll see furious, furious diplomatic activity the day after inauguration,” says Rachel Kyte, the dean of the Fletcher School at Tufts University and the former head of the World Bank’s climate program.

From a scientific perspective, the new Administration’s commitment to addressing the climate crisis comes in the nick of time. In recent years, scientists have warned that the world is dangerously close to losing any chance of keeping global warming to no more than 1.5°C—a level that would lead to catastrophic effects. With that in mind, leading economists and climate activists have called for the world to use the coronavirus public-health and economic crisis to pivot the global economy to take on the looming climate crisis. They argue that the trillions of stimulus dollars countries are spending should support clean energy and green infrastructure. Results have been lacking: some leaders have propped up the old way of doing things, giving fossil-fuel companies bailouts.

But at the same time, this moment of crisis has produced encouraging signs that a gigantic change may be afoot. Some countries have set timelines to phase out coal mining, linked airline bailouts to reducing emissions and allowed fossil-fuel companies to go bankrupt. Seven of the world’s 10 largest economies have adopted the goal of eliminating their carbon emissions by the middle of the century. If all goes according to plan, it will soon be eight. 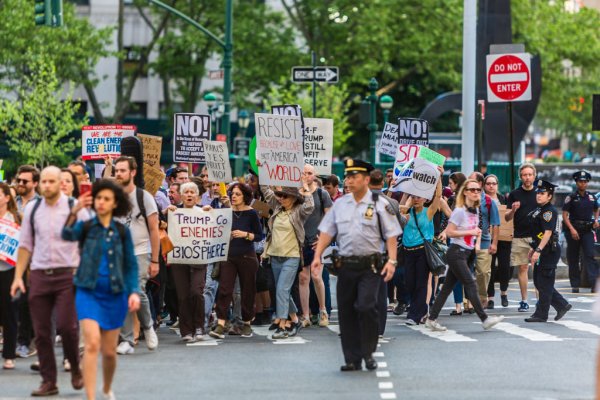 The U.S. Just Officially Left the Paris Agreement. Can it Be a Leader in the Climate Fight Again?
Next Up: Editor's Pick