The 2020 Election Set a Record for Voter Turnout. But Why Is It Normal for So Many Americans to Sit Out Elections?

Americans were prepared for the 2020 U.S. Presidential Election to be historic for a number of reasons, and so far data is backing that up at least in one aspect: voter turnout. More Americans voted in 2020—and voted by mail—than in any other election in U.S. history.

While the final turnout number will be available when all ballots are counted in the coming weeks, already two-thirds of Americans eligible to vote participated—nearly 160 million people, up from around 138 million in the 2016 election—a proportion not seen in more than a century, according to preliminary estimates posted Wednesday by Michael McDonald, professor of Political Science at the University of Florida who runs the United States Elections Project, a website that tracks voter-turnout data. (Because the voting population is larger than it was 100 years ago, that two-thirds rate equates to more voters in terms of sheer volume.)

The above-average voter turnout rate in 2020 is noteworthy as the U.S. usually has some of the worst turnout rates in the world: In a Pew Research ranking of voter turnout in the most recent nationwide elections, the U.S. placed 30th out of 35 nations.

But it wasn’t always the case that a solid chunk of the American electorate sat out the opportunity to vote.

Experts say we can see a parallel to 2020 in the polarization and anger about the incumbent that drove high turnout in the mid-1800s. In 1828, voters turned out in high numbers to deliver Andrew Jackson the White House victory his supporters thought he deserved, four years after he lost a four-way race that was so close the House of Representatives had to decide the outcome—which Jackson’s supporters alleged it did through a compromise known as the “corrupt bargain.” In the aftermath, Jackson supporters successfully coordinated local party groups to continue to mobilize voters.

That groundwork helped set the stage for rising voter turnout rates in the 1830s and 1840s, according to Jon Grinspan, historian at the National Museum of American History and author of the forthcoming The Age of Acrimony: How Americans Fought to Fix Their Democracy, 1865-1915.

At the time, politics was a form of entertainment for the public, which didn’t hurt the turnout. Eric Foner, a Pulitzer Prize-winning historian and an expert on the post-Civil War period known as Reconstruction, tells TIME that political figures of the era, like Henry Clay and James G. Blaine, “were like national celebrities, like movie stars, TV personalities, sports figures.”

In fact, polling locations were a major source of fun on Election Day. The liquor flowed, and people dressed up to see and be seen. People also voted publicly, and a glass ballot box was designed to show that votes were being counted and assuage fears of fraud. Normal turnout in the mid-19th century was around 80%.

The mechanics of voting were also different: people would hand their ballot to a party official who inserted it into the ballot box. Secrecy was not a concern, and in many places, get-out-the-vote efforts were conducted by party machines and political bosses, using tactics that would be considered unethical—or illegal—today. As McDonald noted in a 2008 Brookings op-ed, local ward bosses, “who knew their neighbors intimately, dispensed jobs and favors for votes” and political machines “paid supporters’ taxes in states that disenfranchised tax delinquents.”

In the late 19th and early 20th centuries, these political machines were the target of reform efforts, which led to the introduction of such innovations as the secret ballot. But while some of these Progressive Era reforms were meant to prevent corruption, they were also meant to prevent certain people from voting, especially immigrants and people of color. The Parties also stopped holding the celebrations that had once drawn people to the ballot box, opting for pamphlets instead of parades.

Meanwhile, especially in the South, the rise of Jim Crow brought its own wave of restrictions on voting. To get around the 15th Amendment to the Constitution, which is supposed to prohibit the restriction of voting “on account of race”, states passed laws requiring citizens to pay fees to vote (which became known as poll taxes) or pass tests that had no correct answers (known as literacy tests) and enforced them unequally, subjecting Black Americans to these hurdles more than white Americans.

In other words, Grinspan says, the effort to lower voter turnout was deliberate.

“There is a big culture of huge turnout in the late 19th century, and it’s mostly kind of working class Americans, immigrants and urban Americans,” he says. “The upper class doesn’t like the idea of a political system dominated by these political machines that are made up of Irish, German, Jewish immigrants run out of saloons in the cities.”

Per the Encyclopedia of U.S. Political History, by World War I, Northern states like New York, Oregon, Pennsylvania, and Indiana adopted procedures that made voting and registering to vote more of a pain. For example, a 1911 New Jersey law requiring residents to register to vote in person before Election Day is largely responsible for state voter turnout dropping from 82.4% in 1908 to 69.1% in 1912. Such requirements are “enough of a deterrent” to voting that the number of people who abstain have a significant effect on the result, says Grinspan.

“I think of voting as a faucet; you open it wider or tighten it up, and it’s like tightening the faucet on turnout and engagement,” he says.

As a result, voter turnout hasn’t reached the heights of the 19th century since 1900, when the Presidential election saw a 73% turnout. There were some upticks in turnout in the 1930s (attributed to the crisis atmosphere of the Great Depression and the charismatic FDR as President), shortly after World War II (riding on general patriotic fervor of the war) and during the social movements of the 1960s. But even after the passage of the Voting Rights Act of 1965, voter participation didn’t go back to the way it once was, and it’s stayed pretty consistently just over 50% since President Richard Nixon won re-election in the 1972 race.

The decline in voter turnout rates from the mid-1960s to the early-2000s can be pegged to a range of reasons, including less trust in government and the loss of the sense of civic duty felt by voters from the Greatest Generation. While the 26th Amendment, ratified in 1971 to lower the voting age from 21 to 18, in theory introduced younger voters to the electorate, their lower voting rates have been seen as contributing to lower turnout overall.

But the last two decades have suggested that things may be changing. “Since 2004, we’ve been at the higher range of turnout over the past century of our politics,” McDonald says. Political scientists and historians note the 2000 election exacerbated political polarization, and political parties and advocacy groups have improved at mobilizing voters on the grassroots level.

And perhaps it’s not surprising, given the polarization and high passions of 2020, that the trend has continued.

“A lot of people got disengaged after a series of assassinations of Martin Luther King, Jr. and Bobby Kennedy and the Nixon election, during that period, even though the laws helped bring people into the political system, the decline of these social organizations and collective movement had a negative impact,” says Paul Gronke, a professor of Political Science at Reed College and founder and director of the Early Voting Information Center. “The 1960s were an optimistic period, and the 1970s period was not. That’s what really drives people to the ballot box: they cared.” 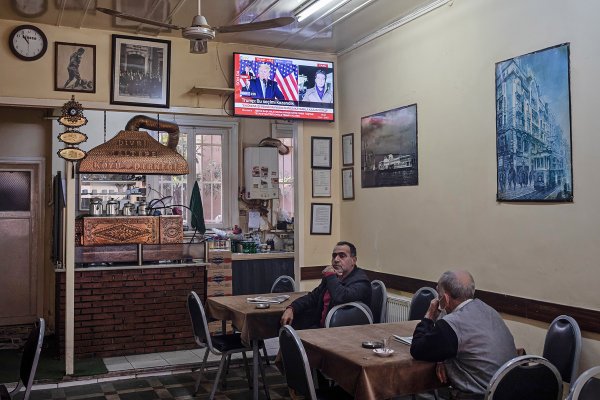