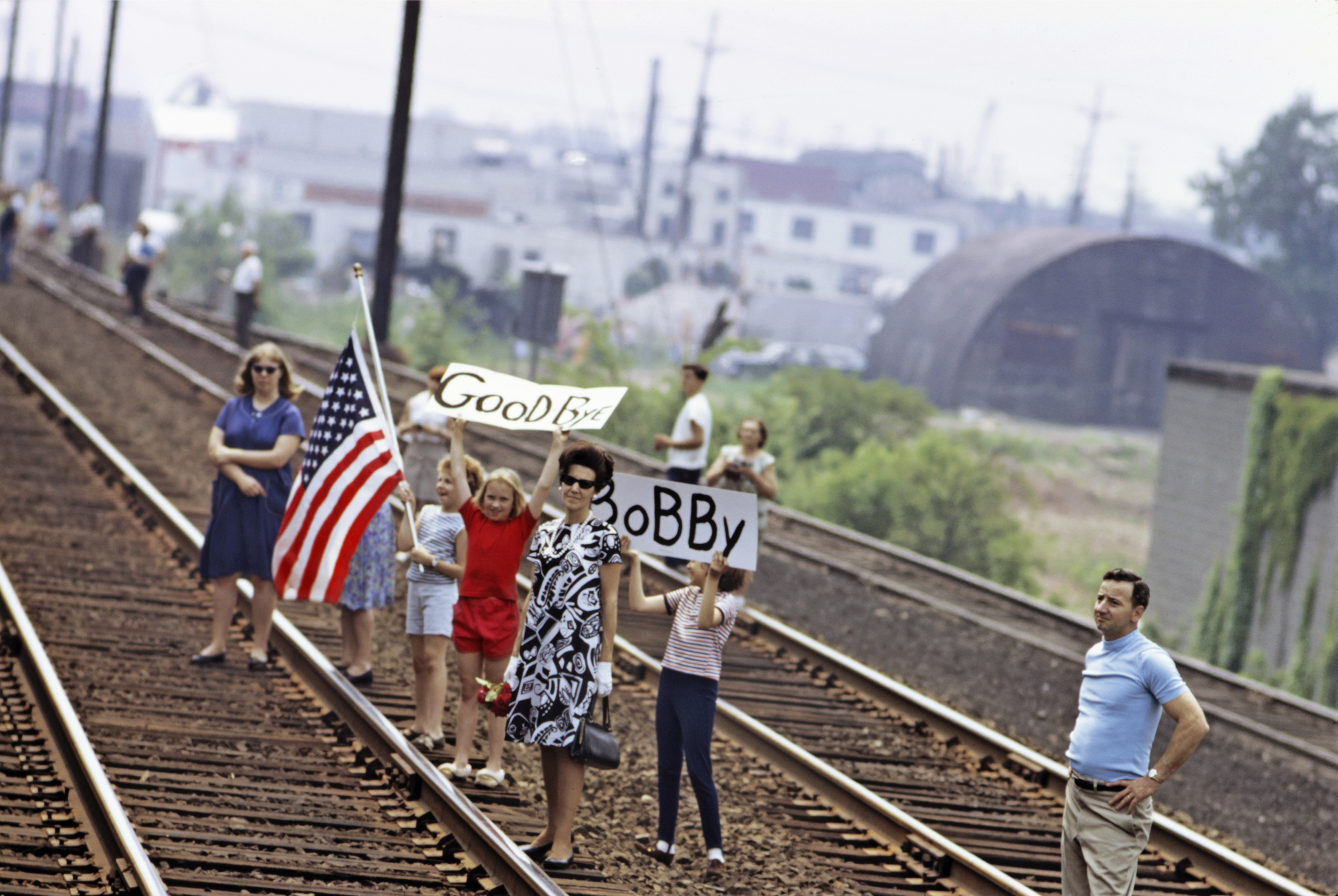 When Robert F. Kennedy was shot on June 5, 1968 — exactly 50 years ago — the shock of the assassination was felt far beyond the Los Angeles hotel in which the bullet was fired. Struck down in the middle of his own run for the White House, the New York Senator and brother of a murdered president died the next day. Two days after that came the funeral mass at St. Patrick’s Cathedral in New York City. Then, his casket was draped in an American flag and brought by train the 225 miles to Washington, D.C., so Kennedy could be buried at Arlington National Cemetery.

Though 2,000 people were invited to the church service, the funeral would unexpectedly end up becoming a much bigger affair.

Somewhere between 1 and 2 million people showed up to pay their respects by standing alongside the tracks to see the 21-car train carrying the casket, in an echo of the sendoff that Abraham Lincoln got in 1865 after his assassination and General Douglas MacArthur got in 1964. Kennedy’s coffin was in the last car, propped up by red velvet chairs in the dining section so that the public could catch a glimpse of it. What was usually a four-hour train ride took eight hours, to avoid hitting anyone on the tracks. (A train passing by in the other direction fatally struck two onlookers in Elizabeth, N.J.)

Some of the most famous images of that journey were taken by Look magazine’s Paul Fusco, who had no other choice but to make the bystanders the center of the story. As he recalled to Publishers Weekly in 2008, “There were two private cars, the last two, and we couldn’t get near them—this was a private event. It was off-limits to the press. All I was thinking about was how to get access when we got to Arlington. Then, when the train emerged from beneath the Hudson, and I saw hundreds of people on the platform watching the train come slowly through — it went very slowly — I just opened the window and began to shoot.”

Of the more than 1,000 slides that Fusco shot, only one was published; the editors thought the pictures would seem behind the news by the time the next issue of the bi-weekly magazine hit newsstands. When the magazine folded about three years later, the Library of Congress acquired its archive and most of Fusco’s funeral train photos.

Thus the funeral train photos would remain largely unseen until the 30th anniversary of the assassination, when some were published as a photo essay in George magazine, which had been founded by Bobby Kennedy’s nephew John F. Kennedy Jr. (who would die tragically a year later in a plane crash). More were published in a photo book that came out the following year, and Aperture published even more in 2008.

A further selection of photos of these onlookers has been on view at the San Francisco Museum of Modern Art and is currently in New York City, both at the Danziger Gallery and the International Center of Photography, but Fusco’s images from that day still provide something new to see — in fact, featured here are five of his images that had never been seen publicly before the International Center of Photography Museum opened its exhibition on May 23.

Photos and home video taken by the people on the other side of the camera lens are also on display via RFK Funeral Train: The People’s View, a project by Dutch artist Rein Jelle Terpstra, which comprises a book of stories from onlookers and a film that uses pictures and footage that Terpstra tracked down largely through Facebook and local historical societies.

The onlookers’ tales in Terpstra’s project are each unique, but clearly part of the same story. Judy Rogers, then a 32-year-old mother of three and RFK presidential campaign volunteer, tells TIME that she remembers linking arms with other onlookers at the North Philadelphia station to sing the “Glory, glory Hallelujah” chorus of the Civil War battle anthem “Battle Hymn of the Republic,” one of RFK’s favorite songs. Michael Scott, then the 15-year-old son of a NAACP chapter president in North East, Md., remembers watching “hopes and dreams in a casket going right by me” — hopes and dreams his family had “pinned” onto RFK ever since he arranged for state troopers to protect the Freedom Riders when he was the U.S. Attorney General. And 16-year-old Washington Post paper boy Jerry Lewis, who recalls crying in his driveway over the stack of papers that brought him the news of the assassination, spotted the casket from a knoll in Bowie, Md., after nearly two hours of waiting.

All told TIME that they showed up to see the train because they wanted to witness history, and to say goodbye to a man they had believed could unite the country at a time of immense division. As Rogers put it, “We don’t always know where truth is, but my gut told me Bobby Kennedy was real at a time when so much wasn’t.”

The Fusco photo set is part of that story too. Those onlookers’ identities may be harder to pin down, but the images they left are indelible. The man waving a crutch. The woman kneeling in the dirt with her hands clasped in prayer. The people with the signs.

As one of those signs famously put it, “So long Bobby.”