President Trump Praised Both Andrew Jackson and Henry Clay. They Hated Each Other

At a rally in Louisville on Monday, President Donald Trump sang the praises of “the great 19th century statesman” Henry Clay, the former Speaker of the House, U.S. Senator and Whig Party co-founder.

“Henry Clay believed in what he called the ‘American system,’ and proposed tariffs to protect American industry and finance American infrastructure,” Trump said. “Like Henry Clay, we want to put our own people to work… Clay was a fierce advocate for American manufacturing. He wanted it badly, he said, very strongly, free trade… He knew all the way back, early 1800s, Clay said that trade must be fair, equal, and reciprocal. Boom.”

Experts say that Trump’s assessment of Clay’s belief that the country would prosper when industry at home grew is correct, yet Clay’s ideas weren’t based on helping American workers. In that sense, he diverged from the populist idol who has been a frequent touchstone for Trump: Andrew Jackson, whose portrait hangs in the Oval Office.

“They were absolutely feral enemies,” says Fergus Bordewich, author of America’s Great Debate: Henry Clay, Stephen A. Douglas, and the Compromise that Preserved the Union. “They absolutely hated each other, they shared almost no views in common.”

Both men lived in a unique period in American history. Part of the first generation to come of age after the American Revolution, they were ” filled with a kind of chest-expanding, button-bursting idea of American importance and nationalism,” Bordewich says. One way that nationalism was expressed was through war, and in fact, as a Congressman, Clay was a major supporter of the War of 1812, the conflict that made Jackson’s military reputation. That position helped catapult him into the role of the Speaker of the House, the youngest ever at that point. “At one point, he said something to the effect of, ‘the Kentucky militia can capture Canada all by itself,'” Bordewich says. “It couldn’t. In fact, it fell apart.”

Clay’s ideas changed over time, and he let go of some of his war hawk opinions. He opposed war with Mexico 30 years after the War of 1812, for example, and is still perhaps best known for his efforts to avert the Civil War. (Though his ability to wrangle Senate compromises in the years before the Civil War won Abraham Lincoln’s praise — the president called him called him “the man for whom I fought all my humble life” — today his compromises are sometimes seen in a less friendly light, as they involved giving into some demands from slave states.)

It wasn’t that the War of 1812 had dashed Clay’s belief in a strong America, but not everyone agreed with his new ideas about how to achieve that goal. One person who disagreed? Andrew Jackson.

“When it comes to tariffs and American industry, [Trump] is much closer to Clay’s philosophy than Jackson’s,” argues Jeanne Heidler, who co-wrote Henry Clay: The Essential American with David Heidler. “Jackson wasn’t opposed to tariffs, but I don’t think he necessarily got their purpose. He saw them as a way to raise money, before there was such thing as federal income tax. Philosophically, Jackson didn’t see them as necessarily tied to encouraging American industry, while Clay wanted to use tariffs to shape policy by encouraging the sale of American manufacturing goods over imported ones.”

As Heidler explains, Southern cotton producers often exported their raw material to Britain, where they could get better prices, rather than to textile mills in the North. Then, they would buy the finished fabrics back from the U.K., further supporting the already more efficient and established British textile industry. The way to keep the material within the U.S. and benefit textile producers here, Clay reasoned, would be to tax British imports, to encourage people to want to buy fabric produced domestically rather than from overseas. But, though Clay’s ideas were intended to support the U.S. as a great commercial nation, it more directly benefited the Northern manufacturers more than the Southern farmers, David Heidler adds, exacerbating the divide between the two regions.

That divide was also increased by Clay’s “American System,” which Congress passed in stages in the years after the War of 1812. It led to the federally-funded construction and improvements of bridges, roads, railways and canals that made it easier to connect northern banking, manufacturing and living systems, according to Harlow Giles Unger, author of Henry Clay: America’s Greatest Statesman. In the plantation-centered Southern economy, however, those projects were less of a concern. “This is why, by time of the Civil War, the Union was so connected, but the southern states were all disconnected and didn’t have great roads and highways.”

Plus, Clay supported a central bank that would control and establish a stable currency, while Trump’s idol Andrew Jackson would get rid of the existing national bank in 1833, a move that many historians say led to the panic of 1837. “Jackson as president was quite aggressive, [at a time when] the passive executive was regarded as the ideal,” says David Heidler. “To Clay, Jackson represented enormous executive overreach.” Moreover, “Clay objected to imparting a particularly cult of personality around Jackson because of his great military achievements.”

“In one hand he holds the purse, and in the other he brandishes the sword of the country. What more does he want?” Clay said of President Jackson.

And, despite some news reports describing Clay as a populist, he was basically the opposite, says Bordewich, as the Whig Party — a forerunner of the eventual Republican Party — represented the interests of manufacturing and business.

“In fact,” says Bordewich, “that’s why Clay was never elected President. Whigs, in the early years, tried to sway elite leadership of the opposition rather than speak to the popular masses.” 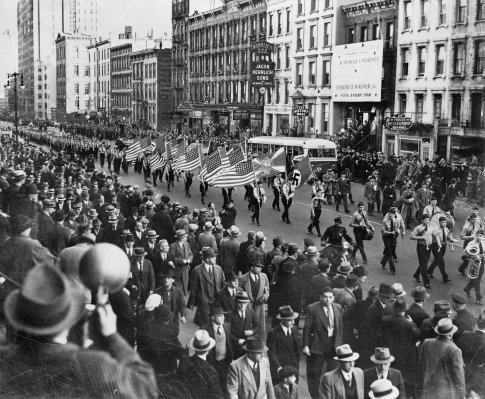 Why the Nazis Loved America
Next Up: Editor's Pick