This Is the Story Behind Your 'I Voted' Sticker

'I Voted' sticker on the black background.
Getty Images
By Olivia B. Waxman

As Americans go to the polls this Tuesday, they’ll likely also see which of their friends are doing the same, as their Facebook and Twitter feeds are overrun by “I Voted” sticker selfies. The patriotic decals can also snag citizens free food and drinks, a ride home and many other incentives that businesses offer to wearers.

The badge of pride has been a fixture at many polling places since…well, it’s not totally clear. Exactly who invented the sticker is a bit mysterious.

It seems likely that the decals are a product of the early 1980s. An Oct. 29, 1982, Miami Herald article may contain the earliest mention of such a sticker, in a discussion of how small businesses in Fort Lauderdale were offering discounts to customers wearing “I Voted” stickers. The Phoenix Realtors Association says it started distributing such stickers in Phoenix and Maricopa County a few years later, in 1985, and National Campaign Supply claims it started selling them in 1986.

Janet Boudreau, who used to run the election-supply company Intab, designed a version with an American flag blowing in the wind in 1987. She was shocked by how many people didn’t realize it was Election Day, and wanted to do something to help. “I wanted them to see people with an ‘I Voted’ sticker and think, ‘Oh, I should do that,'” she says. For Boudreau, now 57, the sticker was a product of coming of age during the ’60s and ’70s, during which time she realized just how much voting mattered. “In terms of civil rights and people protesting against the Vietnam War, we could see populism having a huge effect. Who you’d get in office to pass or kill legislation could mean life or death for some people.”

But does the sticker actually help?

Political scientists say it’s not that the sticker itself gets people out to vote, but that the sticker represents an attempt to bring back a sense of community that was once associated with voting—and that feeling does matter.

As explained by Richard Bensel, professor of government at Cornell University and author of The American Ballot Box in the Mid-Nineteenth Century, the system of voting in the 19th century was very public, as eligible men would go to the polling place to collect ballots from party agents, and then voters hand the ticket of their choice to an election judge, who would deposit it himself into a voting box. Because some of the tickets were color coded, anyone present might get a chance to see who voted, and for whom. “An ‘I Voted’ sticker wouldn’t have meant as much,” Bensel says. “You were voting in public, so everyone who was relevant, who would care, would see you vote.”

And Election Day was a real occasion: Men might show they were old enough to vote by growing out their facial hair and getting all dressed up, according to Jon Grinspan, a curator of political history at the Smithsonian’s National Museum of American History. Liquor would flow freely at the polling place, lending the balloting a raucous—sometimes violent—celebratory air. As Philip A. Klinkner, professor of Government at Hamilton College, puts it, “it was the state fair and the Fourth of July and the Christmas Day all wrapped up into one.”

Since the introduction of the secret ballot in the late 19th century, voting has become a solitary, almost somber act.

That’s one reason why voter turnout rates sank in the 20th century, says Donald P. Green, professor of political science at Columbia University. “[Voter turnout] rebounded after World War II, sagged during the 1970s, and it has rebounded in the last four elections in part because both parties have gotten better at mobilizing voters,” he says, adding that “the 2000 election dramatized the importance of every vote.” (Green guesses the drama of 2000 may be why the “I Voted” sticker seems more visible today than it was in the past.)

And, as shown by a study Green co-authored, reviving the 19th-century attitude that Election Day is a community holiday can make a difference when it comes to turnout. The study examined 14 different cities and towns in which “Election Day festivals” were held—featuring everything from Taiko drummers to clowns—and found that, as he puts it, “if you can get people to the parties, you can get them to vote.” (That experiment is being conducted again for the 2016 election in over two dozen cities).

Over the years, some counties have stopped ordering “I Voted” stickers due to budget constraints—the Santa Clara County Registrar of Voters said it saved over $90,000 by not offering them in 2012—and others are moving away from stickers to prevent citizens from plastering the public places with them. But, even if the stickers themselves fall out of favor, their lesson will stick around: seeing that other people are participating can be the nudge a citizen needs to get into the voting booth.

In fact, research has even shown that people may be more likely to act if they know someone else might notice. Economists at the University of California-Berkeley, the University of Chicago, and Harvard University recently found that “telling people they’re going to be asked about voting will make them more likely to vote,” says Stefano DellaVigna, a professor of economics and business administration at Berkeley. Similarly, research by Costas Panagopoulos, a professor of political science at Fordham University, found that when voters are thanked for voting in a past election, they’re more likely to vote in a future election.

Panagopoulos proposes an even more effective get-out-the-vote method than the “I Voted” sticker: “People who get the sticker have already voted, so they’re motivated enough for it to have worked in the first place,” he says. “If we could find the people who didn’t vote and give them a sticker saying ‘I Didn’t Vote,’ that could cause a greater increase in turnout.” 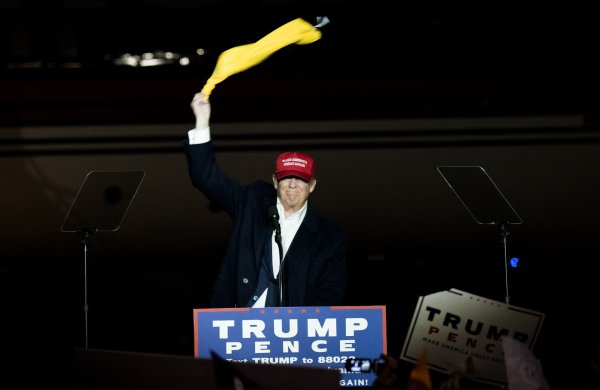 Donald Trump Is an Existential Threat to America and the World
Next Up: Editor's Pick