New Yorkers bid farewell to the 18th Amendment that legalized Prohibition and which was repealed by the 21st Amendment on Dec. 5, 1933.
Imagno—Getty Images
By Olivia B. Waxman

If you’re planning to raise a glass to the 85th anniversary of the end of Prohibition, set your clock now: it was at 5:32 p.m. ET on Dec. 5, 1933, that Utah became the 36th state to ratify the 21st Amendment. That decision gave the new addition enough support to be added to the Constitution, where — as the only Constitutional Amendment to repeal an earlier one — it repealed the 18th Amendment. Thus, after roughly 13 years of Prohibition, it wiped away the U.S. ban on “the manufacture, sale, or transportation of intoxicating liquors.”

“Last week the U. S. liquor industry was nerved for its deadline of Dec. 5, for a stampede into the virgin territory of a billion-dollar business. When Utah, Pennsylvania or Ohio sounded the bugle of Repeal, 20 states with one-half the U. S. population would automatically be open for liquor sales,” TIME declared in its Dec. 4, 1933, cover story on this momentous occasion.

But watch what you’re toasting. Drinking didn’t end during Prohibition, and the end of that era didn’t lead to a liquored-up free-for-all. For a rundown of how Prohibition did in fact change the way Americans drank, and how its effects can still be seen today, TIME spoke to Daniel Okrent, former Time Inc. editor-at-large and author of Last Call: The Rise and Fall of Prohibition.

TIME: Why was the sale of alcohol banned in the first place?

OKRENT: In the 19th century, alcohol was a really, really big problem in this country. In the 1830s, 1840s and 1850s, particularly on the frontier, it was extremely destructive of family life. Men would go to the tavern, drink away mortgage money, drink so much they couldn’t go to work the next day, beat their wives, abuse their children. That’s what launched the beginning of the temperance movement. It was a women’s movement against abuse at the hands of drunk men. Susan B. Anthony and Elizabeth Cady Stanton [started out as] temperance workers; [they] turned towards getting the vote for women because that was the only way they could change the laws involving drinking.

Why was drinking such a huge problem back then? How was it different from today?

The average consumption of alcohol in the 1830s and 1840s was three times what it is today. Wine wasn’t a big element in the drinking diet at the time, so there was more pure alcohol, substantially more. Men and women didn’t drink together in public, except for the wealthy, so the tavern was a male retreat and a place for an unhappy man to really tie one on.

If this problem dates to the 1830s, why did Prohibition happen a century later? What else was going on that explains why Prohibition went into effect when it did?

There was also great anti-immigrant feeling in the northern and eastern cities, where political machines were dominated in most cities by [immigrant] tavern owners delivering votes to Congressmen. People in the middle of the country thought alcohol was fueling that political movement in the cities, so that’s another reason to cut it off. The South also wanted to keep alcohol away from black men, that was a very strong motivator.

Once Prohibition started, to what extent did people keep drinking anyway?

The general belief is that drinking dropped by about 30% at the beginning of Prohibition. By the end, it had become closer to what it had been before, but didn’t get back to pre-Prohibition levels until 1939 to 1940. People of means never really had a problem paying for alcohol. The great irony of repeal is that it became harder to get a drink when it was legal after Dec. 5, 1933, than when it was illegal. When it was illegal, you just needed to bribe a cop on a beat or a Prohibition agent, and that was easy to do. You could sell alcohol to anyone at any time of day. It didn’t matter what the age was or where you were set up. The 21st Amendment gave specific authority over alcohol laws to the states, which proceeded to establish various regulatory agencies and rules — age limits, closing hours, licensing, et cetera — that controlled drinking, which had been uncontrolled in many parts of the country during Prohibition. Nearly all of the liquor sale rules we still have today did not exist pre-Prohibition and during Prohibition.

For your security, we've sent a confirmation email to the address you entered. Click the link to confirm your subscription and begin receiving our newsletters. If you don't get the confirmation within 10 minutes, please check your spam folder.
New York socialite Pauline Morton Sabin, a key leader of the campaign to repeal Prohibition, on the July 18, 1932, cover of TIME magazine.
TIME

What finally got the 18th Amendment repealed?

Women made Prohibition happen, but it was also women who brought about the end of it. Wealthy New York socialite and suffragist Pauline Morton Sabin founded an organization called Women’s Organization for National Prohibition Reform. [Initially] she had supported Prohibition, but she had two sons and they had no regard for the Prohibition laws, as did very few of her friends. How will her sons grow up with any respect for the rule of law if they see that Prohibition is in the Constitution, the basic document of American government, and it’s being violated openly on a daily basis?

But the primary straw was the stock market crash and ensuing Depression, because federal tax revenue disappeared, and the government was running on fumes. It goes back to how Prohibition was created. There could be no Prohibition until the income tax because the federal government needed money. Once that’s in place, you can get rid of the liquor tax, you don’t need to collect money on the sale of liquor. But when you get to 1929, incomes plummet and capital gains disappear. The country is desperate for revenue, and there was one obvious place to get revenue back: the tax on alcohol. And in fact, in 1934, the first 9% of federal revenue came from the new liquor taxes. [The return of the alcohol industry] was a phenomenal jobs program, not only in the distilleries and breweries, but also in bottle makers, cork makers, trucks, barrels, distribution.

What are some of the legacies of Prohibition?

Men and women were drinking together for the first time — a major change in social life in this country. Because the sale of alcohol was against the law beginning in 1919, speakeasies thought, “We’re breaking rules. Let’s break some more rules. Women, come too.” If you have men and women drinking together for the first time, you’re probably going to have food and music. The American cabaret and nightclubs were born because of Prohibition.

And before Prohibition, federal crimes largely had to do with white collar crimes. The federal law-enforcement and court systems grew vastly larger with more authority over criminal matters. Organized crime existed pre-Prohibition, but on the local level. When you have the need to move physical goods from one part of the country to another, you need cooperators in other cities. In 1929, in Atlantic City, mob leaders from six cities got together and established no-competition territories, set prices, rules of adjudication. The national crime syndicate was a direct product of Prohibition.

Is there any link between today’s speakeasies and their trendy artisanal cocktails and the real history of Prohibition?

The idea of brands of whiskey does come from Prohibition because of the concern people had about the quality of alcohol being distributed illegally in the ’20s. There was a belief you were safer with brand names. Mixed drinks are definitely from Prohibition. The quality of alcohol was so bad that you had to disguise the flavor by adding tonic, fruit juice or ginger ale so it would not taste so horrible. But there were no passwords and peep holes in New York or Chicago by 1925 and 1926. If you wanted a drink, you knew where the place was. The mythos of speakeasy culture is a product of Hollywood, not of Prohibition.

You mentioned earlier that a public-health crisis led to Prohibition. What kind of impact did repeal have on public health?

The public health view of alcohol came out of a repeal. This stuff is back, let’s be careful. When Seagram’s — which had been the largest bootlegger during Prohibition, and then one of the largest distributors of legal alcohol — brought alcohol back, its campaign was “drink sensibly.” Selling liquor with the notion of drinking in moderation had never occurred before. 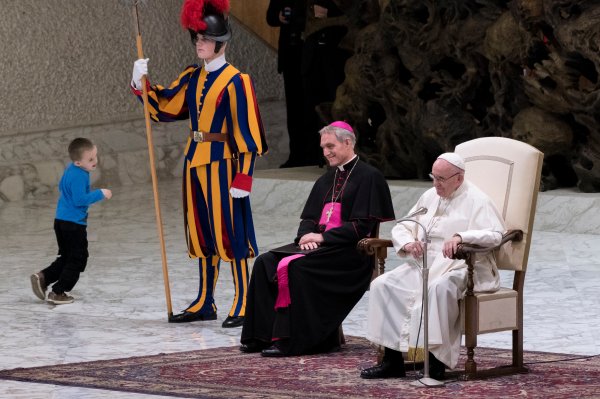 Adorable Boy Upstages the Pope at the Vatican and We Are All Blessed
Next Up: Editor's Pick