A mural of Breonna Taylor reflected on balloons left at her makeshift memorial in Jefferson Square Park on Sept. 24, 2020 in Louisville, Kentucky.
Michael M. Santiago—Getty Images
By Josiah Bates

Before a Kentucky grand jury released its decision in the Breonna Taylor case on Wednesday afternoon, Sadiqa Reynolds, President of the Louisville Urban League, says the city’s Black residents had tried to remain hopeful for justice.

“[We] wanted to believe that our community could actually experience real justice—for all of us. It was very difficult,” Reynolds says, speaking of the feeling behind the protests that have erupted in the city since then. “The capacity for us as Black people to be oppressed and attempt to uplift ourselves and others takes a heavy toll.”

The grand jury declined to bring charges directly related to Taylor’s death against the Louisville officers who shot and killed her during a late-night raid of her apartment in March. The only charge filed was of “wanton endangerment,” brought against one officer for recklessly shooting into Taylor’s apartment as well as her neighbors’ residences.

Activists in Louisville say that though people weren’t surprised by the grand jury’s decision, many were still devastated. Taylor’s death was just one of several high-profile incidents of Black people dying at the hands of police officers this year. Among the many issues these incidents bring to light, activists and legal experts are again questioning why, even amid these circumstances, charges against officers are rarely seen.

Sam Aguiar, an attorney for the Taylor family, tells TIME the verdict was “a punch in the gut.” He says that the family was hoping for an “unbiased, well-informed” investigation by the Kentucky Attorney General Daniel Cameron’s office. He believes that didn’t happen because Cameron’s “political agenda” and aspirations unduly influenced proceedings.

The Kentucky Attorney General’s office did not immediately respond to TIME’s request for comment.

On the night after the grand jury decision was announced, demonstrators in Louisville and other cities across the U.S. took to the streets to protest Taylor’s death, the grand jury’s decision and the larger criminal justice system. On Wednesday, 217 people were arrested in the city, including a suspect who shot and injured two Louisville Metro Police Department (LMPD) officers.

On Friday, civil rights attorney Benjamin Crump, Sam Aguiar and the Taylor family held a press conference, calling for the release of the grand jury’s transcripts, among other demands.

“Did [Kentucky Attorney General Daniel Cameron] present any evidence on Breonna Taylor’s behalf? Or did he make a unilateral decision to put his thumb on the scales of justice?” Crump said at the press conference. “If you want us to accept the results, then release the transcript so we can have transparency.”

Taylor’s mother Tamika Palmer, in a statement read by a family member, said she did not expect justice from Cameron’s investigation.

The ongoing discussion of what that would entail—and how to get there—has exposed shortcomings in both the U.S. legal system and its culture of policing that make finding such justice such a complicated task.

What is ‘wanton endangerment’?

The sole charge brought by the grand jury was against Brett Hankinson, one of the LMPD officers involved in the raid at Taylor’s apartment. Hankinson was charged with three counts of wanton endangerment. The LMPD fired Hankinson on June 21.

In Kentucky, a person is guilty of this charge “when, under circumstances manifesting extreme indifference to the value of human life, he wantonly engages in conduct which creates a substantial danger of death or serious physical injury to another person.”

The same charge was also brought against the suspect who shot the two officers during Wednesday night’s protest.

Read more: A Police Officer Killed Their Mother, and Her Sons Want to Know Why He Hasn’t Faced Trial

“It pretty much means that you do something without regard for how it may harm or affect someone else,” Lorenzo Boyd, director of the Center for Advanced Policing at the University of New Haven, explains. “The wanton endangerment in this situation is the police officer standing outside just recklessly firing his weapon.”

In Taylor’s case, this charge applied to shots fired by Hankinson that entered adjacent apartments and potentially endangered residents there. It was not applied in any context directly related to her death.

Some experts believe that this charge may have been brought by the grand jury to avoid facing a larger backlash in the case of an across-the-board acquittal.

“[It’s possible] they just threw [Hankinson] under the bus in order to keep Louisville from completely erupting,” Joe Margulies, a law professor at Cornell University says.

The role of ‘no-knock’ warrants

In contrast to earlier reporting and police statements that the raid was undertaken with a “no-knock warrant”, AG Cameron said during a Wednesday press conference that his investigation had determined officers both knocked on Taylor’s door and announced themselves before entering and being shot at by Taylor’s boyfriend, Kenneth Walker.

Walker, who was initially charged with first-degree assault and attempt to murder a police officer, has said he did not hear any announcement and fired a shot only after the officers barged into the apartment.

Several of Taylor’s neighbors have claimed that officers did knock but did not announce themselves as police.

In his speech, Cameron explained that his investigation had found that the officers executed the warrant appropriately and, from a legal standpoint, were justified when they fired their weapons on self-defense grounds.

“My job as the special prosecutor in this case was to put emotions aside and investigate the facts to determine if criminal violations of state law resulted in the loss of Ms. Taylor’s life,” Cameron said. “I know that not everyone will be satisfied with the charges we’ve reported today. My team set out to investigate the circumstances surrounding Ms. Taylor’s death. We did it with a singular goal in mind, pursuing the truth.”

“We were told for months [investigators] would turn over every rock,” Aguair says, but he now believes compelling evidence was overlooked—and that discrepancies among crime scene photos, among other issues, were not addressed.

Aguiar tells TIME he has seen police reports and case files not released to the public, and believes details therein—specifically relating to the number of shots fired inside Taylor’s apartment, as well as an alleged pause between rounds—could not have been justified, and offered clear grounds for greater prosecution under Kentucky law.

“Unless you have somebody investigating and prosecuting these cases who comes from an independent point of view, you’re not going to get thorough and credible investigations,” Michael Avery, the president of the National Police Accountability Project, says.

AG Cameron’s investigation only covered the moment when the shooting occurred—there was no investigation into the details on how the officers obtained the warrant. Legal experts also believe the use of no-knock warrants are problematic.

“I think the police tend to overstate the need for no-knock warrants,” Avery says. “No-knock warrants should be very rarely employed—particularly at night. I don’t think this was one served properly.”

The Louisville Metro Council banned the use of “no-knock” warrants in June.

Calls for reform in the criminal justice system

While there is no consensus on which needs to come first, many experts believe that reforming police behavior—in particular, officers’ preparation and willingness to use deadly force—must be aligned with larger changes to the entire criminal justice system.

“The police are clearly a problem but also the court system is problematic, the way a lot of the laws written are problematic. It’s a system-wide thing… the whole system needs to be revamped,” Boyd says. “But the police are the face of it so they’re going to get the brunt of it.”

Read more: The Problems With Policing the Police

Taylor’s death—and the ensuing investigation, unsatisfactory as it is to so many— has also been seen by many as indicative of how the criminal justice system is all too often skewed to negatively impact Black civilians, particularly those in disenfranchised communities and neighborhoods with higher crime rates.

“The criminal justice system uses the war on drugs as a battering ram against the Black community,” Avery argues. “There are certain stereotypical assumptions that the police make when they are dealing with Black people.”

In Louisville, activist Sadiqa Reynolds says the grand jury’s decision will only push community leaders and activists to fight harder for justice and to address the “root cause problems” in the community. (As a part of the settlement reached with the Taylor family, the city of Louisville agreed to make changes to its police department, including drug and alcohol testing for officers involved in shootings and more stringent requirements pertaining to search warrant approval, though when these reform will begin to rollout is unclear.)

Reynolds says this moment is an opportunity for the city and the country to address the racial injustices that exist in every system.

“It’s almost like we’re at this day of reckoning where people are saying we’re not going back,” Reynolds says. “We’re not going to lay down anymore. We know that there is a better way and we know that our voices and our power matter.”

—with reporting by Alex Rees 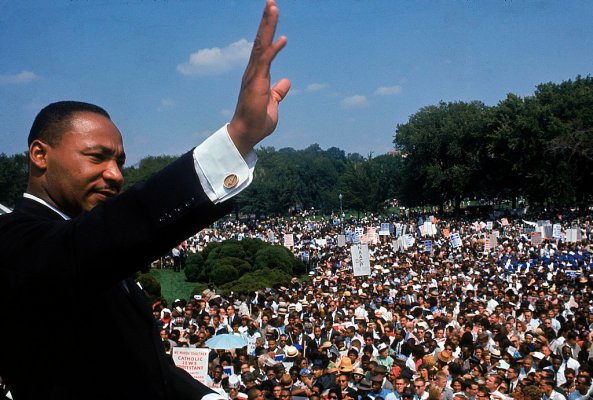 What MLK Said About Police Brutality at the 1963 March on Washington
Next Up: Editor's Pick