'We Should Have a Handle on This by Now.' As Inner-City Neighborhoods See a Surge in Gun Violence, These Are the Changes Community Leaders Say They Need

Police work a scene where two people were shot, one fatally, near the intersection of North Laramie Avenue and West Lake Street in Chicago on July 5, 2019.
Armando L. Sanchez—Chicago Tribune/Getty Images
By Josiah Bates

On the night of July Fourth, 7-year-old Natalie Wallace was playing in the street outside her grandmother’s house in Chicago’s West Side as a holiday party took place.

A car pulled up, multiple men got out and began firing in the direction of the party. Natalie was shot in the head and was later pronounced dead at the hospital.

Among the first people arriving at the scene was Pastor Donovan Price, who prayed with Natalie’s family and provided them comfort. It was one of 53 shooting scenes that Pastor Price says he attended over the holiday weekend, offering support for the families of gun violence victims.

The shootings were so frequent that, Pastor Price says, he was often driving directly from one incident scene to another. Sometimes, he adds, he’d hear gunshots in the distance while providing counsel, an indicator of where he’d likely be headed next.

“It’s all bad right now,” Price tells TIME. “Having to pick up mothers off the ground in the middle of the street at two in the morning. My heart breaks.”

On July 6, Chicago police charged Reginald Merrill, 33, with Natalie’s murder. Police allege Merrill drove the shooters’ car; he is currently being held in Cook County as investigators pursue other suspects. Merrill’s attorney, Nick Burris, reportedly told the judge at Merrill’s bail hearing that Merrill could not be positively identified behind the wheel, and that there is no evidence Merrill knew the other men were going to get out of the car and shoot.

Burris did not immediately respond to TIME’s request for comment.

Pastor Price began his outreach work after the 2015 death of Tyshawn Lee, a 9-year-old who was killed in a targeted shooting that drew national attention to gun violence in Chicago. The Pastor’s church was across the street from the grammar school that Tyshawn attended, he tells TIME. The park from where Tyshawn was lured by his assailants is also down the street.

“He had to have dribbled his little basketball right past my church,” Price says.

Pastor Price and community activists in cities across America that are currently facing high levels of gun violence say the issue has been ignored — and stigmatized — for too long. Buoyed by the groundswell of support for some high-profile victims of police violence, and for larger societal reforms, they say now is the time for action.

“This should be a wake-up call. We’ve been pressing the snooze button on this issue for too long and we’re at the point where we can’t press it anymore,” Pastor Price says. “We should have a handle on this by now.”

Photos and shoes of gun violence victims at a anti-gun rally on the Art Museum steps, in Philadelphia, on June 11, 2018.
Bastiaan Slabbers—NurPhoto

Historically, inner-city neighborhoods and marginalized urban communities across the United States face gun violence rates much higher than statistical norms. In many of these communities, gun violence has increased in the aftermath of George Floyd’s killing in Minneapolis, and the widespread protests against police brutality and racial injustice that followed.

Since Memorial Day — the day Floyd was killed — more than 113 people have been shot in Minneapolis. New York City has had over 800 shooting victims in 2020, compared to 481 in the same period last year.

“In inner-city communities, you often see high levels of poverty [and] a lack of economic opportunity for people who have been systematically disenfranchised by the criminal justice system,” says Josh Horwitz, Executive Director of the Coalition to Stop Gun Violence. “When you add the easy access to firearms, that’s when you have this grinding daily gun violence.”

One common law enforcement strategy to counter such violence is the seizure of illegal weapons, through police raids, individual and vehicle searches, buyback or amnesty programs as well as the collection of discarded weapons at crime scenes. In 2019, Chicago police seized more than 10,000 illegal weapons from the streets. But while many gun violence experts agree that inner-city shootings often come from unregistered firearms, community leaders and experts question the value of confiscations in the grander scheme of gun violence prevention.

LAPD officer Manuel Ramirez stands guard near some of the nearly 1,700 weapons turned over the weekend at a news conference on May 11, 2009.
Brian Vander Brug—Los Angeles Times/Getty Images

The police “might be able to reduce the flow [of illegal weapons] slightly or temporarily by collecting guns off the streets, but there is no demonstration of it being truly effective,” says Gary Slutkin, the CEO of Cure Violence, a nonprofit that uses outreach workers to address conflicts in Chicago and other cities across the country. Rather than seeing gun violence as a crime problem, Cure Violence addresses it like a health crisis, using “violence interrupters” who work to mediate issues in the community between individuals who would otherwise be considered at risk of resorting to violence.

Activists across the U.S. are calling for social work and community-led programs that use “violence interrupters” to be properly funded in a city’s budget and supported as an example of successful de-escalation and de-policing.

D.C. Mayor Muriel Bowser says she believes getting illegal weapons off the streets is important, but that it can’t be the only way to address gun violence and public safety. “It’s too easy to get a gun,” Mayor Bowser told TIME in January. “Somebody intent on getting a gun is going to get one. We have to address public safety in our community in a few [different] ways.”

Under Mayor Bowser’s public safety agenda, the Office of Neighborhood Safety and Engagement (ONSE) approaches community safety in a similar fashion to Cure Violence, using “nonviolent interrupters” to curtail and de-escalate risk factors in the communities.

But Bowser also notes that the District — which requires background checks along with a licensing process for firearm sales, and imposes strict regulations and rules on gun dealers — is surrounded by states with far less stringent gun laws. This means it is often all too easy for weapons to find their way into the nation’s capital across porous state borders.

An officer collects evidence at the scene where an 8-year-old girl was shot on the 1000 block of North Monticello Avenue on Aug. 11, 2019 in Chicago.
Armando L. Sanchez—Chicago Tribune/Getty Images

In Virginia, a state which borders D.C., gun dealers do not need a state license to sell. Background checks are not required for the transfer of weapons between individuals, while gun owners also do not have to report if a gun is stolen or misplaced.

“If I had one thing to ask our federal partners, it is ‘how do we prevent the free flow of illegal guns into urban areas?’” Mayor Bowser said. (The governor’s office in Virginia did not return TIME’s request for comment.)

During a CNN interview on Sunday, Chicago Mayor Lori Lightfoot echoed Bowser’s point. “Our gun problem is related to the fact that we have too many illegal guns in our streets — 60% of which come from states outside of Illinois,” Lightfoot said. “We are being inundated with guns from states that have virtually no gun control, no background checks, no ban on assault weapons.”

Read more: Gun Violence Is Killing More Kids in the U.S. Than COVID-19. When Will We Start Treating It Like a Public Health Issue?

James Aye, who runs Yeah Philly, a nonprofit organization in Philadelphia that supports teens impacted by gun violence, says the city’s police put too much focus on finding weapons and arresting people, without addressing the root causes of gun violence. The city’s police department “doesn’t know how to engage with people,” Aye says. “They’ll do these single-day events [like charity work or neighborhood gatherings], but there needs to be more consistency.”

But Daniel Webster, a professor at John Hopkins who specializes in firearm policy and the prevention of gun violence, notes that most police departments are just not built to deal with the structural disadvantages many communities struggling with gun violence face. “That’s not what [the police] do. They don’t build education, they don’t build jobs, they are not there making sure that people who are leaving incarceration have services that help them get an education and have other options,” Webster says. “They don’t control the environment, they just police it.”

Activists agree that crime in these communities stems largely from endemic socioeconomic disadvantages. Only when there is a consistent effort to address these problems, crime rates will fall, they believe.

“Until structural issues are addressed — people having access to basic needs like affordable food, economic opportunities, housing opportunities — the violence isn’t really going to change,” says Kendra Vandewater, a member of the Anti-Violence Partnership of Philadelphia and the co-founder of Yeah Philly. “The interventions that we have for violence don’t address people’s immediate needs. It’s very reactive.”

This would require local governments to find ways to financially and strategically invest into neighborhoods that are most disenfranchised, whether reallocating funds from other city agencies — as the movement to defund police departments champions, for example — or partnering with the federal government to get extra funds for these communities.

The group Save Our Streets (S.O.S.) holds a peace march in response to a surge in shootings in Brooklyn, New York on July 16, 2020. The march was held near the scene where a one-year-old child was recently shot and killed.
Spencer Platt—Getty Images

But community leaders also say neighborhood residents have to do some work themselves. A major issue in Chicago, Pastor Price says, is the “code of silence” that often exists in communities plagued by gun violence. After a shooting occurs, even those with information on culprits avoid speaking out, because of poor relations and distrust of the police and fear of retaliation from members of the community.

On July 21, 15 people were shot outside a funeral for a man who had been killed in another shooting just the previous week. Pastor Price tells TIME he’s since spoken to people in attendance who had heard “on the streets that [the shooters] said they were going to do it.”

“We need community participation in solving of these crimes. We complain about the police but the no snitching [rule] is huge and detrimental to the community,” Pastor Price says.

While activists may differ as to which next steps are most important, or most immediate, in community-building and violence de-escalation, they are almost wholly united in opposing an increased police presence — and the presence of federal troops.

For weeks, federal agents have been deployed to Portland, Ore. as a reported response to widespread protests in response to the killing of George Floyd and systematic racism. On July 22, however, President Trump announced that he will send federal law enforcement into Chicago to combat crime.

“Murderers and violent criminals are breaking a wide range of federal laws. We will find them, arrest them and prosecute them,” President Trump said at a Wednesday press conference. “They will be in jail for many years to come.”

Chicago’s police leaders have said support the presence of federal officers; while Mayor Lightfoot initially pushed back against this plan, she has since now said she welcomes the federal government—as long as their objectives are in line with local officials.

However, community members remain unconvinced this is the right response to gun violence. “If the government was sending a trauma unit or something to help people I would be okay with it but to bring in [federal agents] with weapons, that’s not going to help,” Pastor Price says. “How long are they going to stay? Forever?” 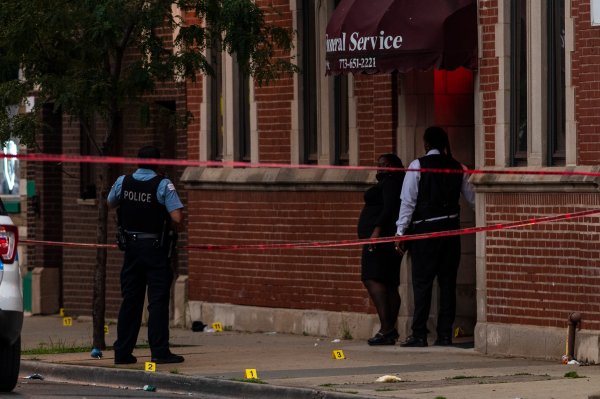 15 People Injured in Shooting Outside Chicago Funeral Home
Next Up: Editor's Pick