If there is a show more ill-suited to premiering this fall than Amazon Prime’s Utopia, I hope I never have to watch it. Created, written and executive produced by Gillian Flynn—the writer behind Gone Girl and Sharp Objects, as well as Steve McQueen’s underrated 2018 film Widows—the cynical thriller follows a crew of nerds obsessed with a mysterious comic book that they believe holds clues about humanity’s dark future. Its mood is apocalyptic. Its violence, while often cartoonish, is frequent, nihilistic and brutal. Its credulous attitude toward conspiracy theories doesn’t feel so exhilarating in the QAnon era. And there’s a subplot about a deadly pandemic that escalates as the story progresses. What makes the show unbearable, though, is that it exploits some of contemporary civilization’s greatest anxieties without saying anything worth hearing about them.

Utopia is the title of both the series, which comes to Prime on Sept. 25, and the comic book at its center. Found, inexplicably, in a dead man’s house, it’s the manuscript of the anxiously awaited sequel to Dystopia—a cult comic about a girl named Jessica Hyde who is kidnapped, along with her scientist dad, by the evil Mr. Rabbit. The anthropomorphic bunny forces her father to invent terrifying new viruses to unleash upon the human race. While Jessica eventually escapes, Daddy Hyde remains in the monster’s clutches. She scrambles to find him, with Mr. Rabbit’s stooges on her tail. Hence Dystopia’s refrain: “Where is Jessica Hyde?”

A few fans on an Internet message board have coalesced around the suspicion that Dystopia is more than a story, convinced it presaged outbreaks of viruses such as Ebola and MERS. Wilson (Desmond Borges of You’re the Worst, in another lovably neurotic role) is a twitchy doomsday prepper with a bunker full of canned food under his front yard. Environmental crusader Samantha (Happy Death Day star Jessica Rothe) imagines that Utopia will be her guide to saving the world. Afflicted with debilitating seizures, Becky (Ashleigh LaThrop of The Handmaid’s Tale) is a young woman desperate for a cure. Ian (Cougar Town’s Dan Byrd), a timid office drone, seems more interested in Becky than he is in the comic. Then there’s Grant (boxing prodigy Javon “Wanna” Walton, also of Euphoria), a sneaky, Dickensian child posing as a wealthy adult. The group converges for the first time at a Chicago comic convention, where Utopia will be sold to the highest bidder.

Also at FringeCon, Christopher Denham’s Arby—a raisin-scarfing little boy in a man’s body, who possesses all the diabolical eccentricity of a Coen Bros. villain—and an underling stalk the hotel halls on a mission to procure the comic at any cost, dispassionately murdering anyone who might possibly stand in their way. And a scrappy, cutthroat young woman (American Honey and Hellboy standout Sasha Lane) pop ups claiming to be the real Jessica Hyde. These characters are responsible for a good chunk of the show’s relentless carnage. The body count of the premiere alone is staggering; Flynn introduces dozens of colorful oddballs only to pick them off, never skimping on blood or gore. The camera lingers over torture as though it’s a treat. If you’re nauseated by the idea of a person getting their fingernails peeled off one by one or having their eye salted, bleached and finally scooped out with a spoon, this is not your new favorite show. I groaned when one episode opened with Jessica standing up to pee in a toilet with the bathroom door open and her gun trained on some hostages—not because I was shocked to see the arc of urine but because I was so exhausted by Utopia‘s attempts to shock me.

Beyond the nerd confab, a pandemic is brewing. Thrust into this parallel storyline is a frustrated virologist (Rainn Wilson’s Dr. Michael Stearns) who rages against a university that has ceased to support his research. Meanwhile, biotech mogul Dr. Kevin Christie (John Cusack), a scarf-clad social entrepreneur with Elon Musk arrogance, saunters around his gleaming corporate campus demanding of his inferiors: “What did you do today to earn your place in this crowded world?” (Along with Lane’s near-feral performance and LaThrop’s endearing vulnerability, Cusack is the show’s highlight.) The queasy pandemic subplot emerges when the eco-friendly synthetic meat his company has been testing in poor, public elementary schools is suspected of spreading a fatal flu strain. Especially considering that the new coronavirus—with a global death toll fast approaching 1 million—has hit low-income communities and people of color the hardest, the juxtaposition of this particular brand of real-life suffering with gleeful cartoon violence feels insensitive at best.

Not that Flynn went into the project with the intention of twisting the COVID-19 knife. Utopia is based on a culty British show of the same name, which debuted in 2013, and the creator has said that she started work on the adaptation almost seven years ago. Moreover, there is an argument to be made that TV has become too responsive to current events. During the past few years in particular, as the news cycle has accelerated in tandem with the social-media furor around each controversy, we’ve seen series take on immigration, political corruption, the Black Lives Matter movement, sexual misconduct in the workplace, the climate crisis and more—with results ranging from brilliant to inadvertently offensive. Six months into the pandemic’s assault on America, television is already deluging us with shallow, remotely shot portraits of life in quarantine (see: the CW’s Love in the Time of Corona) that, in their empty opportunism, are arguably far more offensive than Utopia.

I don’t believe that sensitivity requires the suppression of good art, because good art offers vital insight and perspective on the subjects it broaches, no matter what’s going on in the real world. In the past, Flynn has justified her dark, violent thrillers by filling them with unique characters whose voices and storylines reveal profound social truths. Gone Girl’s psychotic Amy and philandering Nick embody the pathos lurking within a regular-looking heterosexual marriage. Masochistic journalist Camille Preaker and her blue-blooded family, from Sharp Objects, are the products of a backwards town bent on keeping women powerless. In sending Viola Davis to finish a job Liam Neeson started, Widows deconstructed the gendered and racial assumptions that go into an archetypal heist movie. Yet Utopia’s glib, allegedly humorous scripts never provide such detailed portraits of the characters—probably, in part, because there are just so many of them. At times, Flynn seems to be remixing reality rather than commenting on it. Christie’s eldest son (Cory Michael Smith) so closely resembles Jared Kushner, with his delicate, angular facial features and slim-cut suits, that the reference has to be intentional. What is it supposed to mean, though? Beats me. Seven (out of eight) episodes in, I still couldn’t tell what, if anything, the show was trying to say. 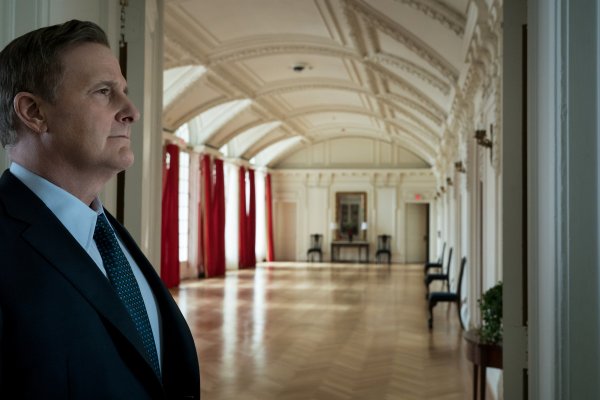 The 2020 Election Is Around the Corner—But TV Is Still Trying to Make Sense of the Last One
Next Up: Editor's Pick