Black and Asian People Are 2 to 3 Times More Likely to Die of COVID-19, U.K. Study Finds

England’s Black, Asian and Ethnic Minority groups are two to three times more likely to die from COVID-19 compared to the general population, a new University College London (UCL) analysis of data from the National Health Service has found.

“Rather than being an equalizer, this work shows that mortality with COVID-19 is disproportionately higher in Black, Asian and Minority Ethnic groups,” said co-author Dr. Delan Devakumar. “It is essential to tackle the underlying social and economic risk factors and barriers to healthcare that lead to these unjust deaths.”

Indeed, after taking region and age into account, the analysis suggested white British people faced a risk of death that is 12% lower than that of the general population and, for White Irish, half lower.

UCL’s analysis, which is currently undergoing peer review, comes just one day after the United Kingdom’s death toll became the highest in Europe and the second highest worldwide, with 196,243 confirmed COVID-19 cases and 29,501 deaths.

Even in countries with lower death rates, researchers have similarly found that BAME groups face a higher fatality rate than the rest of the population. Experts say that barriers to accessing healthcare as well as underlying social and economic risk factors are to blame. Marginalized communities that already struggle to access healthcare and may live in poor conditions are more likely to have preexisting conditions such as diabetes and heart diseases, making them more susceptible to COVID-19.

In the United States—which has the highest number of COVID-19 cases and deaths with 1,206,886 infected and 71,220 deaths—Black Americans are dying in greater numbers.

Aldridge said UCL’s findings supported “an urgent need to take action” to reduce the risks COVID-19 poses to black and minority ethnic citizens. “Actions to reduce these inequities include ensuring an adequate income for everyone so that low paid and zero-hours contract workers can afford to follow social distancing recommendations, reducing occupational risks such as ensuring adequate PPE, reducing barriers to accessing healthcare and providing culturally and linguistically appropriate public health communications.” 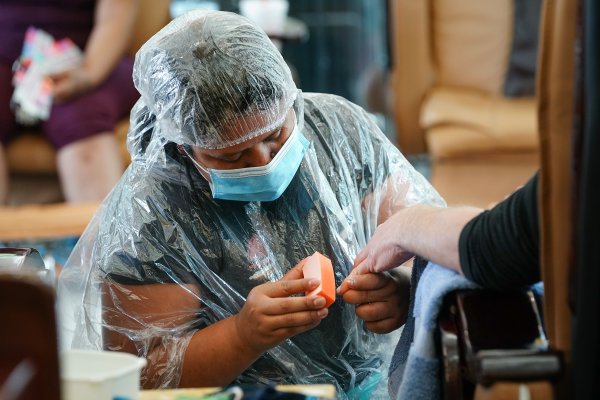 Scared to Return to Work Amid COVID-19? Here Are Your Options
Next Up: Editor's Pick