Widows Is a Heist Movie. But It’s About So Much More Than the Crime

Viola Davis stars in Widows, a heist film that ditches glitz for realism, and male thieves for female ones
Dylan Coulter—Guardian/Eyevine/Redux
By Eliana Dockterman

Widows declares its intentions early. In the film’s opening moments, a career thief named Harry (Liam Neeson) and his wife Veronica (Viola Davis) share a passionate, prolonged kiss. Director Steve McQueen then cuts quickly back and forth between their intimate embrace and the chaos of one of Harry’s robberies as it goes awry. There’s a violent shoot-out, and the crew is killed. Veronica and three other women are left widowed. It’s a startling sequence–but the intensity of the kiss may surprise audiences more than the bloodshed.

“You don’t see couples over 40 kissing like that onscreen,” says Davis. “And you definitely don’t see interracial couples kissing like that.” The scene, she says, captures the stakes of the film. “It wakes people up to the fact that this isn’t a typical action movie,” she says. “They’re not just going to be able to eat their popcorn and enjoy watching someone’s head get blown off.” There will be devastating consequences.

Widows is nominally a heist movie, following the bereft wives (Davis, Michelle Rodriguez and Elizabeth Debicki, plus Cynthia Erivo as a woman pulled into their midst) as they attempt to pull off a robbery to settle their late husbands’ debts. They plot their scheme against the backdrop of a corrupt election between a political scion (Colin Farrell) and a crime boss (Brian Tyree Henry). And purely in that capacity, as a thriller, it’s a great one. The picture surges forward with the speed of a mad getaway driver, and the twists along the way will give viewers heart palpitations. But Widows has grander ambitions than that. It’s a grownup drama that tackles a host of serious issues–race, class, gender, politics, religion, violence, police brutality, grief–all while remaining ridiculously entertaining. “I wanted to get the biggest, broadest audience I could possibly get,” says McQueen, “while at the same time not letting go of the things I believe in intellectually, philosophically, politically.”

This might seem an unlikely move for McQueen, whose last film, the harrowing 12 Years a Slave, earned him a Best Picture Oscar in 2014. But he fell in love with the British television series on which Widows is based at 13, as he sprawled in front of the television on his mother’s spiral carpet in West London in the ’80s. “Until then, I had been projecting myself on people like Sean Connery as James Bond,” he says. “So I felt this kinship with these women who had to circumvent the stereotypes put upon them, just as I always had.” For years he had wanted to update the story to tackle modern political issues.

McQueen recruited Gillian Flynn, author of Gone Girl, to co-write the movie. He told her he wasn’t interested in making a crowd-pleasing film in the vein of The Italian Job or Ocean’s 11, one that hinged on the aha moment when the ruse is revealed; instead, he wanted to use the formula as an engine to drive real human drama. Flynn didn’t take much convincing. “I’m not a heist-movie person,” Flynn admits. “I didn’t want to write the safecracker and the tech person. I wanted to explore what it would actually look like for this group of women to come together by necessity.”

Widows isn’t a rallying cry for female unity and empowerment. It’s a story about women of different races and classes who chafe as they struggle to work together. And while they do find some common ground, building relationships isn’t the point. “They bond over some things,” says Erivo, who plays getaway driver Belle. “The two single moms both know what it’s like to try to find someone to look after their kids while they go to work to make ends meet. The women of color have a certain understanding. But this doesn’t have to be The Baby-Sitters Club for them to pull this off.”

Flynn’s native Chicago proved the perfect setting. More than many other big cities in America, Chicago remains segregated. The Polish neighborhood, black neighborhood, Greek neighborhood and Hispanic neighborhood may all sit within a few stops on the L, but their residents rarely rub elbows. McQueen beautifully captures the racial and economic demarcations in a single shot: his camera follows a black car from the outside as it carries a white political candidate from a rally in the center of his primarily black district to his campaign headquarters on the edge of that same district. In just a few blocks, crumbling churches and empty storefronts give way to blossoming trees and towering mansions.

The script crackles with those tensions. When the wealthy Veronica first meets two of the other widows, Linda (Rodriguez) and Alice (Debicki), one of them incredulously asks, “You’re Harry’s wife? How did you two meet?” Later, when Veronica chastises Alice for being late to a meeting, Linda points out that the other women are juggling jobs and child care to survive: “Our lives are more complicated than yours.”

Their struggle becomes even thornier when you consider that the widows aren’t up against a stereotypical villain but rather endemic corruption. In Chicago, McQueen explains, everybody’s “got a guy.” Need Bears tickets? Your contractor’s “got a guy.” In the market for a new car? Your neighbor’s “got a guy.”

McQueen became obsessed with the phrase while touring the city alongside Flynn. The co-writers interviewed FBI investigators, criminals, community organizers and religious leaders–and everybody used that same language to describe their connections. “The whole city is about bending rules,” says McQueen. “Across the board–African American, Polish, Hispanic–everyone was saying it. Even the police were saying it.”

That ethos rules the world of Widows. “I wanted to capture the incestuousness of Chicago,” says Flynn. As alliances are made and betrayed, the violence grows increasingly brutal. But the most horrific moments don’t feel sensational–they pass in a flash. “What’s savage and shocking is the speed and efficiency of it,” says Debicki.

In casting the film, McQueen avoided Hollywood glamour–he wanted to reflect the real women in the audience. He auditioned more than 100 women but couldn’t fill the role he eventually offered to Rodriguez. At first, the actor refused the part. She saw the character–a mother who married young, had two kids with the wrong guy and is left to pick up the pieces–as a victim.

“I didn’t see the female empowerment in soft power. It was an all-too-familiar tale of poverty in an urban environment. I’ve lived that life–why would I want to portray it?” she says. “Steve challenged me on that. The character reminds me of my mother. So why do I judge her? Why do I see that character as weak? The fear became an opportunity.”

She worked out some of those thoughts in the rehearsals with the other actors. The four women sat together talking, Davis says, about what it is to be a woman in the world–“to not be in control of your life, to have people label you, to be told you’re not pretty enough, to be told you’re nothing without a man.” The conversations bonded them. “We refused to label each other as the world had always labeled us,” Davis says.

In Widows, as in life, people judge one another on the basis of race, class and gender. Those assumptions can set characters on different paths or limit their life choices. The smartest characters in the story use other people’s assumptions about them to their advantage. At one point, Veronica tasks Alice, a Polish-American woman who has been abused by both her mother and her husband, with buying guns for the group. Alice makes her way to a gun show, where she persuades a firearms enthusiast that she’s a mail-order bride in need of three Glocks. “She literally uses the thing that’s been the muzzle and held her back her whole life, the idea of being this beaten housewife, and spins this story,” says Debicki.

She says the scene draws laughs in every screening. Yes, it’s a sharp bit of commentary about our perceptions of female fragility and how easy it is to buy a gun in this country. But it’s also just fun to watch Debicki swing a bag of handguns over her shoulder and celebrate her triumph with a hot dog.

It’s a subtle victory when true change for women can feel, at times, unreachable. Even within the movie, an undue amount of the widows’ energy is expended just fending off despair as they grieve and figure out how to move forward with their lives. But born from that adversity is a determination to survive. “I love Wonder Woman, but these women don’t have a golden lasso sitting in the closet,” says Davis. “They’re real. They struggle. But they’ve woken up to the fact that they gave their lives over to their husbands. And now they have to take ownership back.” 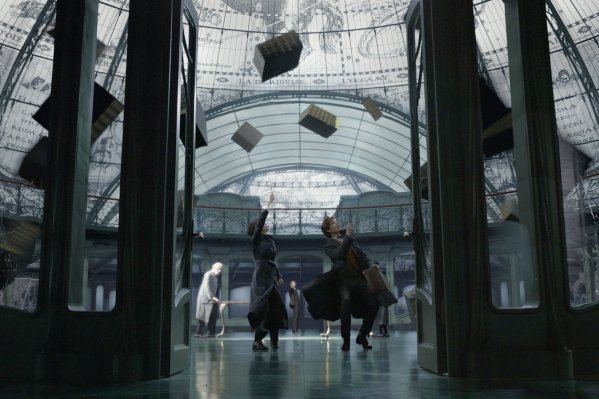 Everything’s a Secret When You’re on the Set of Fantastic Beasts
Next Up: Editor's Pick