These Afro-Latino Actors Are Pushing Back Against Erasure in Hollywood

The Panamanian-American actor Sarunas Jackson often hears a familiar line of questioning soon after he meets someone new. “You say you’re Black, but you speak Spanish. So what is it? Which one are you?” Jackson says people ask him.

Jackson is Afro-Latino, a label for people who identify as both Black and Latino. Many Afro-Latinos are descended from African slaves who were brought to the Caribbean and South America as opposed to the U.S.: “It’s just a matter of where the boat dropped us off,” Jackson says. Now, one in four Latinos in the U.S. identifies as Afro-Latino according to the Pew Research Center, amounting to roughly 15 million people.

But while there are millions of Afro-Latinos around the world, they are chronically misunderstood and underrepresented. Across Latin America, they are marginalized and discriminated against. In the U.S., they are less likely to go to college and are more likely to have a lower family income than other Latinos. In terms of representation, almost all of the biggest Latina entertainment stars—including Jennifer Lopez, Sofia Vergara and Salma Hayek—are fair-skinned, as gatekeepers perpetuate a narrow image of what it means to “look Latina.” Afro-Latino actors are consistently shut out of roles because they don’t match that image—and when they are cast, it’s even rarer that they get to play Afro-Latino characters, instead playing characters who are Black or mixed race but not Latino.

Last year saw a rare bright spot for representation when Jharrel Jerome became the first Afro-Latino to win an Emmy for acting, for his gutting portrayal of Korey Wise on Ava DuVernay’s When They See Us. But this year, the Emmys have become a focal point for a contentious conversation around Afro-Latino erasure after an L.A. Times article, originally titled “Emmys 2020: Black nominees gain ground, Latino representation still abysmal,” was perceived to pit the groups against each other while ignoring their intersection.

While the term “Afro-Latino” only came into consistent use within the last two decades, Afro-Latinos have been “hiding in plain sight since time,” Gina Torres, an actor best known for her roles on Suits and Firefly, said during the roundtable. During the transatlantic slave trade, well over 90% of the more than 12 million Africans enslaved by Europeans were forcibly brought to the Caribbean and South America.

Many of the slaves who landed south of Florida died due to the brutal conditions, but a lineage of African descendants began to spread across Central and South America, mixing the cultures of their homeland, indigenous populations and their European colonizers. Now, according to the Pew Research Center, there are more than 130 million “Afro-descendants” living in Latin America, three times the number of African Americans in the U.S.

Despite their outsize presence in countries like Brazil, Haiti, Cuba and the Dominican Republic, colorism runs rampant in those societies—and Afro-Latinos “are 2.5 times more likely to live in chronic poverty than whites or mestizos,” according to a World Bank report. “The gut punch of it for us is understanding that our lighter-skinned brothers and sisters drank the same Kool-Aid of colonization that everybody else did,” Torres says.

Read More: ‘Latinx’ Is Gaining Popularity. But New Research Says Only 3% of U.S. Hispanics Use the Gender-Neutral Term

The actor and singer Amara La Negra experienced this type of behavior firsthand. As a child, she was cast in Sábado Gigante, the enormously popular variety show that was the longest-running show in Univision’s history. But she was almost always the only dark-skinned face among the performers, and says she was subject to constant colorism behind the scenes. “They never knew how to place me. It was like, ‘Your look is messing up the choreography,’” La Negra recalls.

La Negra later auditioned for a major telenovela, only to be rebuffed by the casting director: “‘No, there’s nothing you did bad,’” she recalls hearing. “‘You’re beautiful! It’s just that we’re looking for someone more, como que, Latina.’”

Laz Alonso, the veteran Hollywood actor known for his roles in Fast & Furious and Avatar, says he hasn’t been able to get any jobs in Latin America: “The doors are shut,” he says. “It really bewilders me how Latinos are not as aware of our Black history as we are in the states.”

While the Latin-American market has proved itself frequently hostile to Black performers, Afro-Latinos often experience double marginalization in the U.S.: not only are Black and Latino people underrepresented in most arenas of public life, but Afro-Latinos often feel shunned within each community. “When I was in the African-American environment, it was like, ‘Oh, there goes that Spanish girl,’” La Negra says. “And then when I’m in the Latin environment, it’s like, ‘You’re too Black to be here. You should be with them.’”

The marginalization of Black Latinos in African-American communities is part of something that Henry Louis Gates Jr. refers to as “African-American exceptionalism”: the idea that the Black experience is the Black American experience. “When we’re celebrating Blackness, if you think about that umbrella of Black, there’s obviously different cultures and different nationalities,” Jackson says.

In Hollywood, the Afro-Latino perspective is all but invisible. Alonso began his film career in the early 2000s, and was put up for almost exclusively African-American roles. When he auditioned for Latino roles, he got similar feedback as La Negra did: “‘Well, he did a good job, but he doesn’t look Latin.’ They thought a Latino had to look Mexican,” Alonso says.

Torres, too, was asked to play mostly African-American characters, and says that many of her peers changed their Latin-sounding last names rather than deal with the confusion. When Torres did pass the audition stage, she would find that her characters lacked depth. “I have been the eunuch in pretty much every show,” she says. “I’m always the ball-buster, the assassin, or the cop that doesn’t have a life—because to have a life means that you have to humanize me. It’s so much easier for them to fit you into that slot and check off that box. And they got a lot of boxes with me: female, mature, person of color.”

Jackson is of a younger generation, having broken into Hollywood just as the industry was starting to grapple with #OscarsSoWhite. But he faced some of the same misconceptions that his peers initially faced decades earlier. “Every time, I just had to be a light-skinned Black guy or a biracial Black guy who was just Black and white,” he says. “But you know, it is what it is. You’re going to take a role.” Meanwhile, rising shows centered on Latino Americans, like Vida and Jane the Virgin, mostly excluded Afro-Latinos as well.

When Jackson was cast on Insecure, his character, Dro, was initially supposed to be Black and Mexican. But when Jackson pushed for Dro to be Afro-Latino by way of Panama, the showrunners agreed to make the change. “That was the first time I was ever allowed to be an Afro-Latino character,” he says.

Within the past decade, a movement for representation has allowed different types of stories to emerge, and a trickle of Afro-Latino stories has come to the screen. FX’s Pose features two prominent Afro-Latina actors: Indya Moore and MJ Rodriguez. The hit Netflix show On My Block features an Afro-Latina lead character, Monse (although the actor who plays her, Sierra Capri, is not Afro-Latina), while writers of Netflix’s Gentefied created the character Yessika with Afro-Latina actors in mind. “We really wanted to explore those issues of anti-Blackness and colorism within the Latinx community,” co-creator Marvin Lemus told Remezcla earlier this year.

Last year, Torres became the first Afro-Latina to create, produce and star in her own show, with Pearson on the USA Network. “I finally got into a position of power, and said, ‘We’re going to write this character as Afro-Latina. I’m going to use my Spanish as often as possible,” she says. “That was sort of my way of educating the people around me, and what I was doing was absolutely being 100% myself.”

Of course, the U.S. entertainment world has a long way to go to in terms of representation. According to a study by USC’s Annenberg Inclusion Initiative, across the 100 top-grossing movies from 2007-2018, only 3% of films featured leads or co-leads with Latino actors—and Afro-Latinos make up an even smaller slice still. The contentious dialogue around the Emmy nominations showed how Afro-Latino viewpoints are erased and how African Americans and Latino Americans can be pitted against one another. Torres’ Pearson was canceled after just one season. “They’re having us fight over crumbs,” she says.

To forge ahead, Torres talks about “creating channels for sustainable access”: mentorship, education, collaboration, creation of authentic stories. One of those channels is Orange Is the New Black star Dascha Polanco’s Brown Love podcast for Netflix, in which she delves into these issues. “It is the responsibility of those that are in positions of power to push forward diversity in a way that is not a trend,” Polanco says. “This is the Afro-diaspora. This is the normalcy of life.” 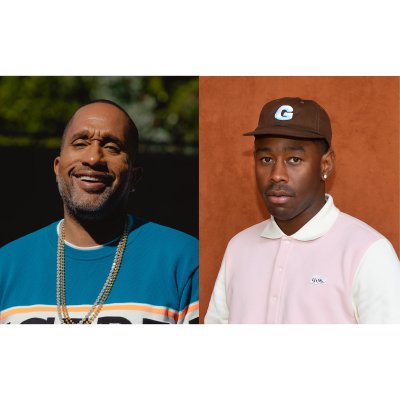 Kenya Barris In Conversation With Tyler, The Creator: 'Why Can't We Tell Our Stories?'
Next Up: Editor's Pick