In Pose's Breathtaking Second Season, the Category Is Righteous Fury

Angel (Indya Moore) acts up in the second season of 'Pose.'
Macall Polay/FX
By Judy Berman

What a difference three years makes. The first season of FX’s New York City ballroom drama Pose began in 1987—the same year that Paris Is Burning, director Jennie Livingston’s influential documentary about the scene, opens. At that time, ball culture was still a mostly underground phenomenon. Though gay men and trans women of color had been forming chosen families known as houses to compete in elaborate drag and voguing competitions since the early ’70s, it took the attention of white outsiders like Livingston (a consulting producer of Pose) and particularly Madonna to bring this wildly inventive art form into the mainstream. Both Madonna’s “Vogue” and Paris debuted in 1990, changing the ballroom scene forever. It’s in that heady moment that creators Ryan Murphy, Brad Falchuk and Steven Canals choose to revisit the fictional House of Evangelista and their rivals for the show’s dazzling, crushing and intentionally infuriating second season, which debuts June 11.

Though the backdrop is a pop hit that makes voguing—and practitioners like dance prodigy Damon (Ryan Jamaal Swain)—trendy downtown while fueling the community’s fantasies of stardom, the characters’ lives outside the ballroom are strikingly unglamorous. The explosive season premiere opens with saintly Evangelista mom Blanca (Mj Rodriguez) and O.G. emcee Pray Tell (Billy Porter, who deserves an Emmy for his stirring performance in the new episodes) on a boat to Hart Island, the bleak final resting place of unclaimed bodies and city residents too poor to afford a proper burial. “I’ve been to three funerals this week,” Pray seethes. “Where’s the cure?” As they search the island for the mass grave where his ex Keenan is interred, he and Blanca find a makeshift memorial to the many AIDS patients buried on the island. Both HIV-positive and financially insecure, the pair is clearly haunted by the possibility of spending eternity in such a miserable place.

In fact, even as she pins her hopes for the house on ballroom’s breakthrough, Blanca sinks deeper into denial about her declining health. Even her pal Judy, a quippy lesbian nurse (the great Sandra Bernhard, perfectly cast in a new role), has trouble convincing her to take free AZT pills bequeathed by wealthy white AIDS patients. Blanca keeps her spirits up with optimism about Damon’s new gig teaching outsiders to vogue, beautiful Angel’s (Indya Moore, who gives the season’s other standout performance) nascent modeling career and her own future in the nail-art business. Yet a meeting of ACT UP, the tenacious group of AIDS activists that had just been founded in 1987, gives Pray Tell an outlet for his righteous anger. At his insistence, the House of Evangelista—with the notable exception of imperious grandma Elektra (Dominique Jackson)—turns out for a die-in at a Catholic church that echoes the real group’s famous “Stop the Church” action.

What’s remarkable is how much Pose manages to accomplish simultaneously—and without sacrificing the specificity of each character’s personality, relationships or aspirations. The die-in doesn’t just reenact a moment of desperate bravery in the LGBT community; as directed by FX stalwart Gwyneth Horder-Payton, it places trans women of color on the front lines of a movement they’d helped lead since Stonewall, but that has often erased them from the official history. In a storyline that wisely drops the straight, white characters of season 1 (played by Kate Mara, James Van Der Beek and Evan Peters, all TV stars outshined by their fresh-faced cast mates) to further foreground Blanca, Angel, Pray Tell and Elektra, season 2 illustrates how so many denizens of ball culture suffered and died as a blissfully ignorant mainstream co-opted their cool.

Pose is yet another mainstream representation of the scene. But it avoids replicating the gulf between Madonna’s depiction—which some have argued was exploitative—and the lived reality of its characters by staring deep into it. Even as she capitalizes on the fashion world’s vogue for voguing, Angel lives in fear of powerful people in the industry “clocking” her as trans. And if the show pulled some punches to get viewers hooked on early episodes, it isn’t shying away from painful truths anymore. Death suffuses season 2; funeral scenes are almost as common as ball sequences. Elektra, in an on-the-nose but still perfect development, takes a lucrative job as a dominatrix but still can’t entirely escape the perils of her identity. Blanca discovers that money isn’t the only thing standing in the way of her becoming a successful business owner. Surely in part because three of the four episodes provided to critics were written or co-written by writer-producers Janet Mock and Our Lady J, both trans women, the season is fueled by the steadfast solidarity and justified rage of marginalized characters who only have each other to rely on. “When the outside world tries to shut us down,” Elektra proclaims, “this army closes ranks.”

It’s a line that encapsulates both the show’s most hopeful theme and its constitutional lack of subtlety. Along with reams of praise, Pose has drawn some criticism for its stylized grandness, which early detractors argued put too much distance between the viewer and the characters. (I’d like to check back in with those critics midway through season 2, which on a few occasions left me bawling.) But realism isn’t the only path to realness. As transcendent new ball scenes that reference classic melodramas from Les Misérables to Romeo and Juliet suggest, it’s quite possible to feel empathy for outsize characters. So maybe it’s best to think of Pose as a serialized opera or musical, with ball showdowns taking the place of production numbers and veterans of the stage like Porter, Bernhard and Patti LuPone (who joins the cast in a small but wonderfully nasty role) contributing some of its most captivating performances. For producing such an extraordinary, uncompromising second season, everyone involved in the show deserves to take a bow. 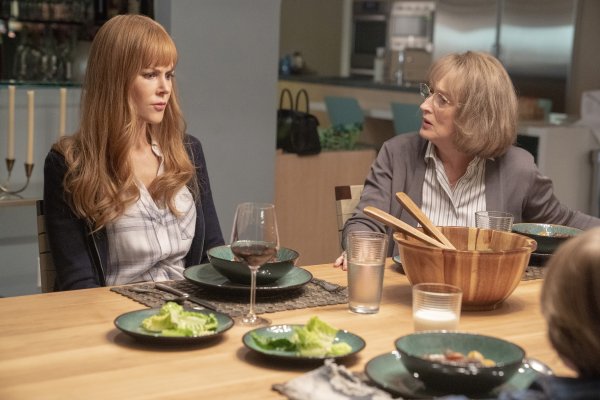 Everyone Is Screaming for Meryl Streep's Big Little Lies Scream
Next Up: Editor's Pick