As Black Lives Matter Gains Momentum, Can TV Keep Up With the Rapid Pace of Social Change?

A still from the 23rd season of the TV series 'Cops.' The show was canceled by Paramount Network in early June.
20thCentFox/Everett Collection
By Judy Berman

On June 9 and 10, all 19 Discovery Networks channels aired the two-part special OWN Spotlight: Where Do We Go From Here? The programs, which drew nearly 11 million viewers plus an additional 6.7 million on YouTube, consisted solely of an extensive, socially distant conversation between Oprah Winfrey and a panel of Black politicians, artists, activists and public intellectuals about the reinvigorated Black Lives Matter movement, culminating with each participant outlining their “asks.” Stacey Abrams stressed the need for fair elections. Poor People’s Campaign leader Rev. William J. Barber II called for an end to poverty. On a somewhat different note, Color of Change executive director Rashad Robinson wanted to see crime TV shows stop ignoring systemic racism. “You see tons of Black and brown characters,” Robinson observed. “But it’s a world where Black and brown people exist, but racism seems not to exist.” This, he said, fuels “demands for fixing Black people and Black families instead of fixing the systems that harm and hurt us.”

Robinson and his organization have proven prescient on the issue of race and policing on television. When Fox canceled the long-running reality series Cops in 2013, it was amid pressure from Color of Change; revived on Spike TV and then Paramount Network, which canceled it again last week, the show is probably gone for good. A&E nixed its similar but more popular and perhaps also crueler Live PD the next day. Years into the Black Lives Matter movement and decades after the civil rights movement began the work today’s activists are continuing, the pace of progress is accelerating. In the political realm, the result has been the repeal of a New York law shielding police disciplinary records, a city council vote in Minneapolis to disband the police department responsible for George Floyd’s death and mainstream voices calling for radical changes in policing.

Other sectors of public life—and the entertainment world in particular—are, amid a pandemic that has already paralyzed so many industries, scrambling to keep up. For TV, that has meant highlighting and opening access to existing titles that take on issues of racial justice, as well as filling COVID-related holes in schedules with specials like Oprah’s. It has also meant re-evaluating current programs from Law & Order to Paw Patrol, purging casts and crews of apparent racists and, for streaming services with film libraries that span more than a century, auditing archives for offensive material. Not all of these choices are as urgent or as obvious as the decision to end reality shows that glorify cops and exploit Black death, but the messiness doesn’t make this reckoning any less crucial for an industry that shapes how Americans see ourselves and each other.

The current incarnation of Black Lives Matter has come at a time when networks that would normally be transitioning to lighter summer schedules amid competition from beaches, air-conditioned theaters and family vacations are instead faced with production delays and captive, still-quarantined audiences. This could explain why, for instance, ABC has found space for a June 16 encore presentation of Let It Fall, its documentary on race in L.A. in the decade leading up to the Rodney King verdict. We’re also seeing a lot of stopgap programming focused on racism, Blackness and law enforcement. And as it’s become clear that we’re living through a singular moment in history, standard coverage strategies—like ABC’s June 2 special America in Pain: What Comes Next?, in which a multiracial team of hosts provided information but not much insight—have given way to the kind of candid discussions that used to be rare outside of activist circles.

The night before Oprah’s special, A+E Networks aired The Time Is Now: Race and Resolution, which put boldface names like Jemele Hill and NAACP president Derrick Johnson in remote conversation with “a virtual audience filled with real Americans.” There were touching scenes, such as when a white mother who’d raised her children to “not see race” admitted how much she had to learn. Even more heartening, though, were the moments when things got raw. When a white former police officer asked why a Black person killing a white person isn’t always framed as racist violence, the actor and comedian Amanda Seales was palpably disturbed by his ignorance of structural racism: “You are literally comparing a regular person and a regular person to a literal police institution that was… created within the context of racism,” she pointed out. White naivety has trumped Black anger on this topic for so long that it was remarkable to hear Seales get the last word. Where Do We Go From Here? was, by comparison, pretty polite. Yet it felt important that everyone on the panel was Black; it prevented the guilt, ignorance and hurt feelings of white people from derailing a conversation in which our primary role is to listen.

No one really expects programming this timely from streaming services. (Hulu has, however, moved up the premieres of two series, Love, Victor and Padma Lakshmi’s Taste the Nation, so that they don’t distract from Juneteenth.) Instead, industry giants are touting their commitment to Black voices through curation: Netflix, HBO Max and Amazon Prime Video are all promoting Black Lives Matter collections on their homepages. PBS, Showtime and Starz, along with some smaller streaming services, like IFC Films Unlimited and the arthouse-focused Criterion Channel, are offering a selection of relevant titles to non-subscribers at no cost. This may all be savvy business, to the extent that it nets each brand positive publicity or new customers, but it’s hard to complain when the result is a free education in Black cinema, history and social justice.

More complicated questions arise when these same companies take it upon themselves to audit the canon—as HBO Max did when it pulled down Gone With the Wind following an L.A. Times op-ed in which 12 Years a Slave screenwriter John Ridley described it as “a film that, when it is not ignoring the horrors of slavery, pauses only to perpetuate some of the most painful stereotypes of people of color.” The platform assured viewers the movie would “return with a discussion of its historical context and a denouncement of those very depictions.” Outrage ensued, with some making accusations of censorship. That reaction felt excessive; for those who can’t wait to watch it, the unabridged film is still available to rent on multiple platforms. (Also: HBO Max is less than a month old.) And for all its Technicolor majesty, Gone With the Wind—like Disney’s plantation-set 1946 kids’ movie Song of the South, which may not be coming to Disney+ anytime soon but lives on in Disney World’s newly controversial Splash Mountain ride—is kind of a special case. It doesn’t just perpetuate racist stereotypes; it paints the antebellum South as a lost paradise and depicts Black people as happily enslaved.

Still, I watch enough old movies to appreciate both how much value they have and how many would come into question if streaming services started combing through their catalogs for historical bigotry. Additional context and analysis should always be welcome; screening hateful propaganda from D.W. Griffith’s pro-KKK The Birth of a Nation to Leni Riefenstahl’s Nazi opus Triumph of the Will is unconscionable without proper framing. Yet the fact is that both of these films are available not just to rent, but also to watch for free on various open video-sharing platforms. (While YouTube banned Triumph of the Will last year for violating its hate speech policy, Riefenstahl’s Nazi-era sports documentary Olympia remains on the site.) It’s no secret, either, that YouTube has spent the past few years playing whac-a-mole with content from contemporary white supremacists. Even if erasing films like Gone With the Wind from history were desirable, it probably wouldn’t be possible.

What HBO Max has done isn’t censorship—but it’s worth wondering to what extent it’s brand management rather than a heartfelt response to Ridley’s plea. As physical media disappears in the long wake of brick-and-mortar video stores’ demise and commercial streaming services become de facto public film and TV archives, it’s corporations, not historians or critics or audiences themselves, that end up policing the canon. No matter who holds the rights to any given property, historians, critics and audiences deserve to have a voice in how their culture is (or isn’t) preserved. And for corporations, what’s good for posterity might not always align with what’s good for business. Color of Change currently has a campaign asking Netflix to remove all cop shows from its platform. You don’t have to disagree with that particular effort to worry about a profit-motivated streaming service making moral and aesthetic choices that could reverberate for generations.

This is all a lot to process, amid a much larger movement of which media representations are only one small part. And responses to Black Lives Matter from both traditional TV and the streaming arena are bound to keep pouring in over the next several months. For now, at least, it seems that the most productive examples have focused not on re-litigating the past, but on embracing the entertainment industry’s power to influence the present (e.g., canceling Cops and Live PD) and the future—through ongoing efforts to champion Black creators as well as through special programming. For a movement that has generated so much forward momentum, no trajectory could be more appropriate. 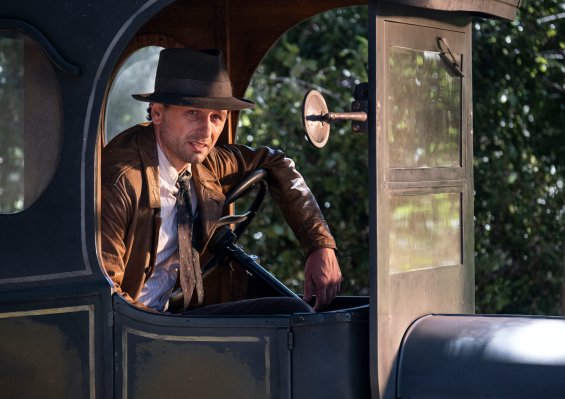 'Cops' Is History, Long Live the Detective Show
Next Up: Editor's Pick