Hulu's Love, Victor Could Be Great If It Prioritized Substance Over Schmaltz

In 2018, as harrowing accounts of anti-gay purges in Chechnya continued to make headlines, American cinema produced a sleeper hit of a romantic comedy about a closeted teen. Love, Simon follows a white boy (Nick Robinson) living in a wealthy, diverse suburb. Simon’s parents are liberal. He has great friends. Yet he can’t bring himself to come out. The movie crescendos to the top of a Ferris wheel, where two boys kiss as their classmates cheer.

The film was sweet but weirdly frictionless—a postscript to a history of struggle that wasn’t over for everyone, a breezy teen romance framed as a profile in courage. Love, Victor, a spin-off series developed for Disney+, then moved to Hulu amid eyebrow-raising concerns over mature themes, tries to add conflict without losing Simon’s innocence. Sophomore Victor Salazar (Michael Cimino) relocates to Simon’s hometown from Texas with his religious Colombian-American family. Still questioning his sexuality and unsure how his loving yet casually homophobic parents might react if he turns out to be queer, Victor has real problems. If only the writers had also given him a real personality.

Though Simon has moved on to college, his legend persists at Creekwood High, prompting Victor to reach out to him via social media for advice. (Robinson, a producer, appears mostly in encouraging voice-overs.) An instant basketball star who unwittingly attracts the most eligible girl in school (Rachel Naomi Hilson’s Mia), Victor should be thrilled with his new life. He just can’t stop thinking about his coffee-shop coworker Benji (George Sear), an openly gay dreamer with excellent hair.

Victor has plenty going for it: the push-pull relationship between sensible Mia and her status-obsessed bestie Lake (Bebe Wood); funny guest stars like Ali Wong and Andy Richter; jokes guaranteed to make adults chuckle. It would be irresistible if it played up that wit, fleshed out its protagonist and explored the deeper implications of the Salazars’ faith, instead of packing in schmaltzy moral-of-the-story moments. The show has already been renewed for a second season, and I’m hopeful it can get back on track. But first it has to decide whether to be blandly universal or culturally specific, Full House or Sex Education, Disney+ or Hulu. 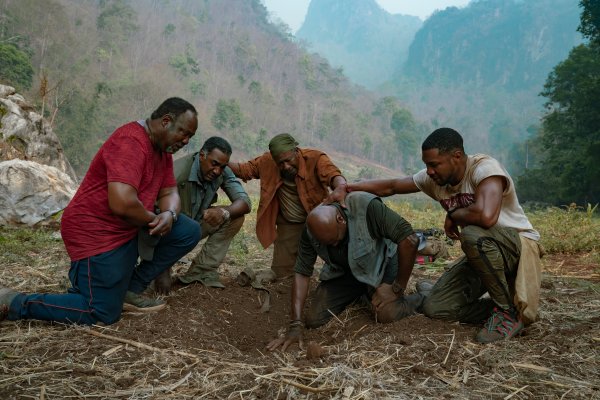 Spike Lee's Da 5 Bloods Is Flawed But Fiery
Next Up: Editor's Pick