I'm a Minneapolis City Council Member. We Must Disband the Police—Here's What Could Come Next

Members of the Minneapolis Police Department face off with protesters during a fourth day of protests over the arrest of George Floyd, who later died in police custody, in Minneapolis, Minnesota on May 29, 2020.
Tannen Maury—EPA-EFE/Shutterstock
Ideas
By Steve Fletcher
Fletcher is a City Council Member for Ward 3 in Minneapolis, Minn.

On Tuesday, May 26, we woke up to find a video circulating of a Minneapolis Police officer named Derek Chauvin kneeling on the neck of a man, choking him to death while onlookers begged him to stop and three other officers stood by and did nothing. The process of mourning George Floyd’s death has sparked a permanent, generational change to the mainstream view of policing in America.

When I ran for the Minneapolis City Council in 2017, I knew that the Police Department had a decades-long history of violence and discrimination. I ran on a platform of police reform informed by my experience seeing police persistently harass young black canvassers that I worked with as a community organizer, and by the police shooting of Jamar Clark in 2015, which prompted weeks of protest outside the fourth precinct. In 2017, the police shooting of Justine Damond further cemented accountability as a central theme of that campaign year.

In my first two years on the Council, several factors have reinforced the context for reform. Minneapolis Police officers shot and killed four more people—Thurman Blevins, Travis Jordan, Mario Benjamin, and Chiasher Fong Vue—and were caught in a bodycam audit asking EMTs to sedate suspects and others with ketamine. The Police Federation refused to comply with a department ban on “warrior training” and took an intentionally divisive on-stage role at a Trump rally.

I have been surprised, then, by how difficult and controversial it has been to pass the relatively small budget changes that we have made, which have not even cut their budget but merely redirected some proposed increases to fund a new Office of Violence Prevention. Other programmatic proposals to change the way we police have been met with stiff institutional resistance.

The weight of that history was especially heavy when we learned of George Floyd’s murder. The accumulated grief and anger from years of police violence was brought to the surface, and thousands of people abandoned social distancing to take to the streets and demand justice. Minneapolis Police had an opportunity to distance themselves from Derek Chauvin, to express sympathy, to be a calming presence. Instead, they deployed tear gas and rubber bullets, effectively escalating the situation from protest to pitched conflict. By the next day, it was clear that people on Lake Street were rallying for much more than the prosecution of four officers. They were demonstrating their anger at decades of harassment and racialized violence and calling for it to end.

The lack of change hasn’t been for lack of trying. Most of us who are currently in office in Minneapolis ran on a platform that included police reform and accountability. Many elected leaders before us have tried and failed to achieve meaningful progress on those fronts, and for the first two years of our current term, so have we. To varying degrees, we’ve all imagined that reform was possible.

My assessment of what is now necessary is shaped by the failure of the reforms we’ve attempted, in the face of opposition from the department and the Police Federation. We have a talented, thoughtful police chief who has attempted some important steps. He has fired officers for significant abuses only to have his decisions overturned and those officers reinstated by arbitrators. Mayor Frey has met fierce resistance from the Federation to implement even minor policy changes.

There is another reason reform can be daunting, even scary. My reform advocacy, incremental though it has been, has prompted intense political attacks from police and their allies, who up to now have been confident that their support for police expansion was a mainstream point of view. And they do not limit their attacks to politics. Politicians who oppose the department’s wishes find slowdowns in their wards. After we cut money from the proposed police budget, I heard from constituents whose 9-1-1 calls took forever to get a response, and I heard about officers telling business owners to call their councilman about why it took so long. Since I’ve started talking publicly about this, elected officials from several cities and towns around the country have contacted me to tell me I am not alone in this experience.

The tragic events of last week have changed Minnesotans’ relationship to the police. After viewing George Floyd’s murder, watching police not only fail to apologize, but escalate the situation with aggressive tactics, and finally watching the department abandon neighborhood businesses to exclusively defend their precinct building, most of my constituents have had enough. The people that the department previously mobilized to advocate for more police are now either calling for structural change or staying quiet, hoping things will go back to normal. Things are not going back to normal.

Every member of the Minneapolis City Council has now expressed the need for dramatic structural change. I am one of many on the Council, including the Council President and the Chair of Public Safety, who are publicly supporting the call to disband our police department and start fresh with a community-oriented, non-violent public safety and outreach capacity. What I hear from most of my constituents is that they want to make sure we provide for public safety, and they have learned their whole lives to equate “safety” with “police,” but are now concluding that need not be the case.

We had already pushed for pilot programs to dispatch county mental health professionals to mental health calls, and fire department EMTs to opioid overdose calls, without police officers. We have similarly experimented with unarmed, community-oriented street teams on weekend nights downtown to focus on de-escalation. We could similarly turn traffic enforcement over to cameras and, potentially, our parking enforcement staff, rather than our police department.

Our city needs a public safety capacity that doesn’t fear our residents. That doesn’t need a gun at a community meeting. That considers itself part of our community. That doesn’t resort quickly to pepper spray when people are understandably angry. That doesn’t murder black people.

We can reimagine what public safety means, what skills we recruit for, and what tools we do and do not need. We can play a role in combating the systems of white supremacy in public safety that the death of black and brown lives has laid bare. We can invest in cultural competency and mental health training, de-escalation and conflict resolution. We can send a city response that that is appropriate to each situation and makes it better. We can resolve confusion over a $20 grocery transaction without drawing a weapon or pulling out handcuffs.

Mostly—and this might be the hardest part to envision and make real—we need to be more deeply engaged with each other. We need to build the relationship networks, skills, and capacity in our communities to support each other in resolving conflicts and keeping each other safe before things escalate dangerously. Our isolation from each other has required us to outsource the management of social interactions. We have to get relational.

Now is the time for us to put all of these ideas into practice, and we know that community members have a lot more. The whole world is watching. We can declare policing as we know it a thing of the past, and create a compassionate, non-violent future. 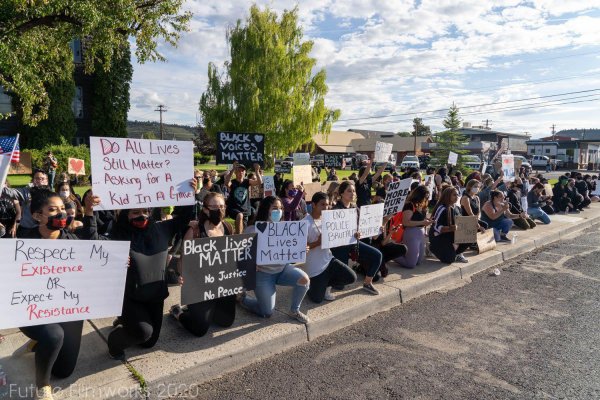 Protests Are Being Held in Small Cities and Towns Across the U.S.—And Young People Are Leading the Charge
Next Up: Editor's Pick