From Donating to Volunteering: Here’s How to Support Black Lives Matter, Protesters and Equality Initiatives

As the nation reels from the police killing of George Floyd and reckons with institutional racism, many are left wondering: what can they do?

Tens of thousands of people have already shown up to protests across the country—in both big cities and rural towns—to demand racial justice and sweeping changes, from police reforms like mandatory body cameras and implicit-bias training, to defunding the institution and allocating city or state budget funds to community groups.

If you want to show up for the cause but are not able to protest in the streets, there are many ways to engage, from educating yourself to volunteering, spreading awareness and donating money.

You can donate to Black Lives Matter, which was founded in 2013 after the neighborhood watch volunteer who fatally shot Trayvon Martin was acquitted.

You can also consider organizations committed to ending mass incarceration and extreme sentencing, like the Equal Justice Initiative, which provides legal representation to people who have been wrongly convicted, unfairly sentenced or abused in state jails and prisons. Some groups, like the National Council For Incarcerated and Formerly Incarcerated Women and Girls, are particularly focused on helping female inmates and ex-convicts.

Those who want to make a long-term grassroots impact can donate to local mutual aid funds, like the COVID-19 Mutual Aid Network – Los Angeles, The Metro Atlanta Mutual Aid Fund or East of the River Mutual Aid Fund. Mutual aid funds work to address homelessness and systemic inequalities by offering all sorts of community assistance, from providing food to financial help to people in need. Many right now are focusing on helping those struggling during the coronavirus pandemic, which has disproportionately infected and killed those in the black community, by providing materials like masks and hygiene kits.

Bail funds have had a particularly busy two weeks as thousands of protesters have been detained across the U.S. These funds are typically collectives driven by volunteers working to raise money to free people incarcerated on bail, as well as to advocate for systemic bail reform.

In the aftermath of Floyd’s death, many bail funds, like the Minnesota Freedom Fund, have been inundated with donations and are now suggesting that donors redirect their money to other bail funds and organizations in need. But many say they still need help.

You can choose to donate to a bail fund in your city or state; the National Bail Fund Network lists a number of bail funds by state.

You can give money to national bail organizations, like National Bail Out and The Bail Project, or other groups focusing on helping specific communities, like the Black Trans Protesters Emergency Fund or the LGBTQ Fund.

ActBlue—a nonprofit that facilitates small-dollar donations online, often to progressive groups—has organized a way for people to split donations between up to more than 70 groups at once, including community bail funds, mutual aid funds, and racial justice organizers.

Help black families who have lost loved ones in killings

You can directly help grieving black families whose loved ones have been unjustly killed by giving to fundraisers set up to help cover the costs of funeral and legal expenses, grief counseling and often to set up educational or memorial grants in honor of those who have been killed.

Philonise Floyd has set up a memorial fund for his brother, George Floyd. You can donate to Floyd’s family through this GoFundMe.

Ahmaud Arbery was shot and killed while running in a residential area in South Georgia on Feb. 23. Gregory McMichael and his son, Travis McMichael, were charged with murder and aggravated assault in Arbery’s death after video footage of the incident circulated on social media and sparked national outrage. You can donate to Arbery’s family through this GoFundMe.

The uproar over Floyd’s killings has raised concerns about why black women and girls may still be an afterthought amid widespread outrage over police killings. Breonna Taylor, an EMT who aspired to be a nurse, was sleeping when a police officer shot and killed her in March. You can donate to Taylor’s family through this GoFundMe.

David McAtee was known for offering free meals to police officers in Louisville. He was fatally shot as the police and National Guard responded to protesters. The Louisville police chief was fired earlier this month after the mayor learned police officers involved in the shooting had not activated their body cameras during the incident. (Authorities had said law enforcement was returning McAtee’s gunfire.) You can donate to McAtee’s family through this GoFundMe.

Supporting black-owned businesses, especially now, could be crucial to helping them stay operational during the pandemic.

Black-owned businesses often have trouble securing loans and had issues accessing federal aid programs designed to alleviate the economic burden for small businesses struggling to stay afloat amid stay-at-home orders. A national online survey of 500 African-American and Latinx-owned small businesses conducted by the Global Strategy Group released May 13—after the second round of funding for the program was allocated—found that just 12% received the full assistance they requested, with two-thirds reporting that they did not receive any.

If you can’t protest or donate and want to help, you can also donate your time or energy.

To help protesters, you could provide childcare and/or meals for those attending rallies. Or sew masks to protect protesters, like one woman in Texas did.

Consider if your skills or profession enables you to provide specialized skills to those in need. If you are involved with a restaurant or faith group with access to a large kitchen, you could consider providing food at a larger scale. For inspiration, they can look to Sikhs, who know how to feed crowds in a protest or a pandemic. In a Queens gurdwara—the place of worship for Sikhs—a group of about 30 cooks has served more than 145,000 free meals in just 10 weeks, the New York Times reports.

If you’re a health care professional, you could help as a medic on the streets for protesters who are hurt by rubber bullets or tear gas—or share resources with those who are helping on the ground. If you know how to speak a language other than English, you can translate important documents and news about protests. If you’re a lawyer, consider offering pro-bono services.

You can also become a legal observer and help document police action during protests. The National Lawyers Guild provides training; you can check with your local chapter for more information.

Donating isn’t the only way to help bail funds. You can volunteer your time and expertise, too.

If you’re thinking of a more long-term commitment, consider mentoring or tutoring at-risk youth. And think about how to create lasting contributions however you’re helping, whether that means setting up recurring donations, diversifying the media and literature you consume, as well supporting black-owned businesses.

Educate yourself and have difficult conversations

Lasting change won’t happen without actively deconstructing our beliefs about race. As many activists have pointed out, in order to make social and economic change in a society rife with institutional racism, it’s not enough to not be racist, but rather people need to be actively anti-racist. For many people learning how to be a helpful ally, the best place to start is educating themselves and listening.

TIME has curated lists on books to read and movies to watch to teach yourself about racism and protest history. Suggested literature includes the Ta-Nehisi Coates memoir Between the World and Me as well as a children’s version of Ibram X. Kendi’s bestseller How to Be an Antiracist, called Anti-Racist Baby (to be published June 16.)

Documentaries are a good place to start, too: 13th by Ava DuVernay, walks through the origins of the mass incarceration of black men, stretching all the way back to the ratification of the 13th Amendment in 1865. (13th is available on Netflix.) Whose Streets dives into the Black Lives Matter uprisings in Ferguson. (Whose Streets is available on Hulu, Amazon Prime, YouTube, Google, Vudu)

Online resources, like this Google Doc on anti-racism resources for white people and this syllabus on “becoming an active ally to the black community” also point to informative materials to read and watch.

For non-black people, having sometimes uncomfortable conversations about racial justice, police violence, and anti-blackness with your own families and communities—even if English isn’t their first language—can be helpful. Letters for Black Lives have compiled a letter translated into two dozen languages that can be a helpful framework to start that conversation with your own family. 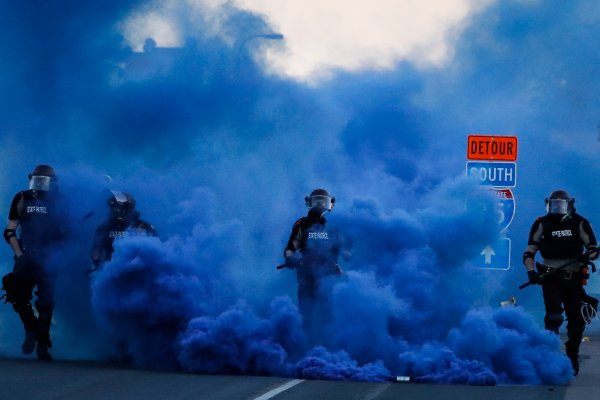 'It Was a Tinderbox.' George Floyd’s Killing Highlights Police Reform Failures
Next Up: Editor's Pick