When you talk to activists who are pushing to defund police departments, there’s a specific word that comes up often: Reimagine.

The idea that police are the only answer to preventing crime and protecting people is one that has been so ingrained into American society that it can be hard to imagine a different reality. But amid a national uprising against police brutality and systemic racism, activists say it’s time to reimagine what the public actually needs.

In the wake of George Floyd’s death, proponents say it’s time to defund police departments and put that money toward community programs, like after-school programs for students and housing assistance for disadvantaged communities. Among racial-justice activists, the idea isn’t new: organizers, including in Minneapolis, had already been calling to defund the police for some time. But now the idea has been taken up by protesters across the country, who say efforts to reform police departments have been unsuccessful and it’s time to curtail the role police play in society.

The U.S. spends more than $100 billion on policing per year. For many major cities, police department budgets make up a disproportionate amount of overall spending, even as other departments face steep cuts amid the coronavirus. Now, that spending is coming under scrutiny.

Among the national groups calling to defund the police are Black Lives Matter, which is currently collecting signatures for a petition calling for a national defunding of police. The Movement for Black Lives, a coalition of black organizations that includes Black Lives Matter, is also calling to defund the police, and during one day of action earlier this week encouraged people to press elected officials on the issue.

The rallying cry has spread across American cities. In Minneapolis, the demand has taken on new urgency: even city council members have gotten in on the calls to dismantle the police department and start over with a community-based approach. In New York City, there are growing cries from both activists and officials to cut the New York Police Department’s $6 billion budget. In Los Angeles, Mayor Eric Garcetti announced up to $150 million could be cut from the police budget and redirected to investments in communities of color.

Melina Abdullah, cofounder of Black Lives Matter LA, one of the organizations involved in the People’s Budget LA coalition that seeks to defund the police, notes that the city’s budget proposal increased funding for the police force at a time when other departments were seeing theirs slashed. “We’re in the midst of a health pandemic with an economic fallout. Why would you be spending more on police?” says Abdullah, who points to schools and parks as places where police could be removed altogether.

In Washington, Mayor Muriel Bowser has painted a Black Lives Matter mural on streets near the White House and rechristened an intersection as Black Lives Matter Plaza. On Saturday, protesters painted “Defund the Police” next to the street mural, BuzzFeed News reported. Activists have been critical of the mayor’s proposed cuts to programs like the Office of Neighborhood Safety and Engagement, which helps to address violence, noting she has proposed budget increases to the police department.

“From our perspective, all this is doing is further empowering the police to continue acts of terror against D.C.’s black communities and against its other poor, working and oppressed communities,” says Sean Blackmon, an organizer with Stop Police Terror Project DC. “What I think people realize is that a big part of impacting the police is getting right at what gives them their ability to do what they do, and a big part of that is just this gross amount of money and resources that they get.”

The proposed restrictions vary by city. In Charlotte, city council member Braxton Winston has introduced a motion that would prohibit money from being spent on chemical agents used to disperse crowds and protesters, while creating a police oversight committee made up of the city council and city manager to review the department’s spending. “There’s always been a political ability to make these changes,” Winston says. “It just seems that we may be in a moment where people that are in positions like mine are finally getting the political will.”

State officials are also hearing these demands. The Minnesota Legislature’s People of Color and Indigenous Caucus suggested policy changes, including funding “community-based intervenors and problem-solvers that can partner with local peace officers.” And in Colorado, Democrats in the state senate introduced a police accountability proposal aimed at increasing transparency. But there are few if any specific proposals currently being proposed on the state level to defund the police; much of the energy is currently on the local and federal levels.

Congress is under pressure to do something. One letter from more than 200 activists, elected officials, and other community leaders called on House Speaker Nancy Pelosi and Senate Minority Leader Chuck Schumer to defund the police, urging them to funnel money that a recent coronavirus-response bill allocated to law enforcement to other emergency response instead.

Democrats are expected to reveal a sweeping police reform bill next week aimed at tackling systemic racism. The New York Times reported that among the proposals currently included in a draft are banning chokeholds and tracking police misconduct with a national registry. It’s unclear, however, whether the legislation will include anything that cuts federal funds.

The momentum around defunding the police is already becoming politicized. “The Radical Left Democrats new theme is “Defund the Police”. Remember that when you don’t want Crime, especially against you and your family. This is where Sleepy Joe is being dragged by the socialists. I am the complete opposite, more money for Law Enforcement! #LAWANDORDER,” tweeted President Donald Trump.

While defunding the police has been in activists’ lexicon for years, some are still surprised at the momentum it’s gathered so quickly. “For so long, police developed this monopoly over the idea of public safety, and so just mentioning anything around defunding police was seen as almost like blasphemy,” says Philip McHarris, a researcher and PhD Candidate at Yale whose work focuses on race and policing. “I think a part of it is we’re in a moment we’ve never seen before.” 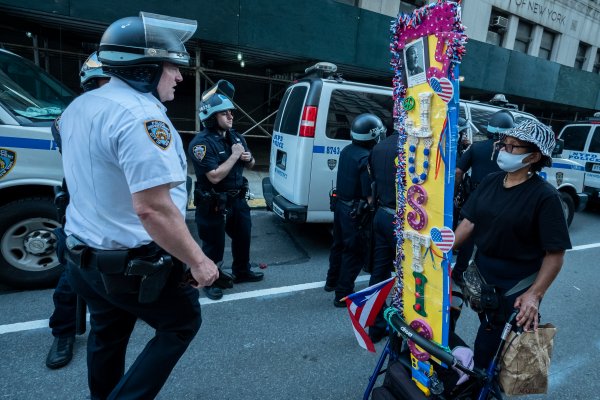 Police in New York Are Defying State and City Orders to Wear Masks
Next Up: Editor's Pick