Black Lives Matter Activists Want to End Police Violence. But They Disagree on How to Do It

In the wake of George Floyd's death, protesters face off with police officers during another night of demonstrations in Manhattan on May 30, 2020.
Malike Sidibe for TIME
By Charlotte Alter

The activists who have flooded city streets since the death of George Floyd all broadly agree on the systemic injustice that has caused the nationwide uprising. They all want to end mass incarceration, dismantle structural racism and end the police killings of black men and women across the country.

But tactical differences have emerged between different camps of activists in the seven years since Black Lives Matter first became a national rallying cry. Some activists have adopted a reformist approach, pushing successfully to equip cops with body cameras, require implicit-bias training and encourage community policing. Others, seeing those measures fail to reduce the number of black deaths at the hands of police, are pushing for more aggressive strategies that weaken or eliminate police altogether. All these activists are committed to the same ends, but they don’t all agree on the means.

There are three broad and overlapping camps within the vast, decentralized network of activists that make up the movement for racial justice in America. The first advocates for a series of reforms to create more accountability for police departments and strictly regulate the use of force, informed by what has and has not worked in the past. The second is increasingly focused on defunding police departments, directing taxpayer money away from law enforcement and towards social services that benefit black communities. The last also aims to redirect funding away from police departments, but considers it a step towards an ultimate goal of abolishing policing altogether.

Some of the leaders in the reform camp banded together after the Ferguson protests to form organizations like Campaign Zero. “In 2014, we were in the early stage of learning the solutions. We knew to protest, but we didn’t know the answers,” says Deray Mckesson, civil-rights activist and co-founder of Campaign Zero. “We knew things that had worked here and there, but we didn’t know what could be a scaled solution.”

Over the last six years, McKesson says, Campaign Zero has learned what doesn’t work. More body cameras, community policing, mental health support for officers, implicit bias training, and having more police officers of color are all reforms that have been tried in various departments. But they don’t actually result in fewer people being killed by police, Mckesson says. “I think that there was a period of time where people thought training might be helpful, community policing might be helpful,” he says. “There is a consensus now that those things don’t work.”

Instead, Mckesson says, Campaign Zero is focused on strategies that both “reduce the power” and “shrink the role” of existing police departments. One step is getting rid of police-union contracts, he says, which often protect bad cops and prevent police chiefs and mayors from making significant reforms. A 2018 study from the University of Chicago found that after Florida sheriffs’ offices were allowed to unionize, violent misconduct such as use-of-force incidents increased 40% (off a very low base, the researchers said). University of Chicago law professor Dhammika Dharmapala, who co-authored the study, said that the findings suggested “a large proportionate increase once an agency has the right to unionize.”

Already, the hashtag #8CantWait has gone viral on social media, as activists call their local leaders to demand these specific reforms. Celebrities like Oprah Winfrey and Jack Dorsey have come out in support, and Campaign Zero says it has heard from government officials in San Antonio, Houston, and Los Angeles. Advocates of this approach note that unlike long fights over budget cuts, many of these policies can be implemented immediately. “The police are here today,” Mckesson says. “And today they can have less power.”

But other activists are skeptical that reforms will be enough to stem the violence. Some have pointed out that versions of some of these policies have been implemented in cities across the country, and yet black people continue to die. There’s a growing sense inside much of the movement that police are inherently violent and racist, that no amount of reform will ever solve the problem, and that a true solution requires rethinking policing altogether.

Instead, these activists say, police departments need to be either significantly defunded or even abolished altogether. The taxpayer dollars spent on policing, they argue, need to be redirected to social programs that could strengthen black communities or stop violence before it starts.

Alicia Garza, founder of the Black Futures Lab and one of the women who coined the phrase #BlackLivesMatter, says that even after 26 criminal-justice reform laws passed in 40 states since 2013, “not much has changed.” About a thousand people are killed at the hands of police every year, according to MappingPoliceViolence.org, and the victims are still disproportionately black. That’s why Garza believes true change entails stemming the flow of taxpayer money to police.

“Overwhelmingly, the largest percentage of most city budgets and state budgets is relating to policing and militarism,” says Garza. “Every machine that you see on the streets costs hundreds of thousands of dollars that could be used for affordable housing, coronavirus testing and resilience support.”

The law-enforcement presence at the nationwide protests has showcased the immense resources funneled to local police departments, even as doctors and nurses were left to fight COVID-19 without enough equipment or supplies. To that end, activists and major institutions have been calling for major reductions in police funding in city budgets. The ACLU recently called to defund law enforcement and reinvest in communities of color. After pushing for raises for police officers, Los Angeles Mayor Eric Garcetti now says he plans to make cuts to the police budget. In New York, activists are calling on Mayor Bill de Blasio to slash the NYPD’s $6 billion budget.

Some of the activists calling for defunding police departments see it as a step towards the ultimate goal of abolishing police altogether. “There shouldn’t even be a moderate Democrat right now who doesn’t believe that we should be taking resources from police departments and reinvesting them in building black futures,” says Jessica Byrd, founder of ThreePoint Strategies, who leads the electoral-justice project at the Movement for Black Lives.

Ending police violence, Byrd says, will require a “radical shift in policing—not a little bit, not reform, not body cams, not new training,” she says, but rather “a radical shift in the way we think about protecting our communities and public safety.”

“It’s enraging that this is radical,” Byrd adds. “Me saying that taxpayer dollars should not fund those helicopters is radical.”

Even though abolishing the police may be politically impossible right now, experts say the movement is laying the groundwork for a longterm shift in how best to keep people safe. “No one is in a position to say ‘tomorrow we flip a magic switch and there are no police,” says Alex Vitale, a professor of sociology at Brooklyn College and author of The End of Policing. But he points to other areas of society where consensus has developed that police are not the solution: in rich white communities, for example, when a teenager is caught with drugs, they are usually sent to rehab and not jail. 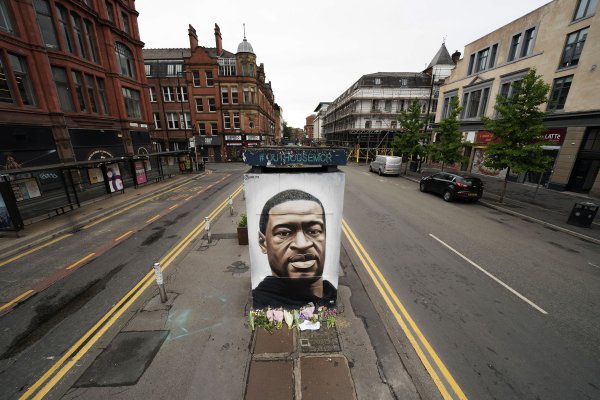 Black Excellence Is an Economic Lifeline
Next Up: Editor's Pick