Inside Bail Funds' 'Nonstop' Efforts to Free the Thousands of Protesters Being Detained Across the U.S.

Police officers arrest a woman during protests in Chicago on May 30 following the killing of George Floyd by Minneapolis police.
Natasha Moustache—Getty Images
By Andrew R. Chow

Just a few weeks ago, the Minnesota Freedom Fund was struggling. “We were down before all this started,” Steve Boland, a board member, tells TIME. “We did not have the financial resources at that point to pay bails and get people out.”

Now, the money is flowing in at a staggering pace. Following the police killing of George Floyd in Minneapolis, protests spread across the U.S. and the Minnesota Freedom Fund went viral. In just the last week they’ve received some 800,000 individual donations amounting to about $31 million, with the deluge prompting them to ask people to send money elsewhere. “It took Paypal 45 minutes to prepare a download today, because it doesn’t usually have to do this many records,” Boland says.

A bail fund is typically a local collective driven by volunteers who work to raise funds to free people incarcerated on bail, as well as to advocate for systemic bail reform. Across the country, these funds are now receiving a huge number of contributions from donors. The Chicago Community Bond Fund and the Peoples City Council Freedom Fund in Los Angeles have both taken in more than $1.5 million. Free Them All For Public Health, in New York, has raised over $700,000 — and has also asked people to stop sending them money.

The donations are a huge boost for nonprofits who were often previously operating on thin margins. But this financial influx is not the end-all solution to get people out of jail — rather, it’s the beginning of the process. Activists can’t simply walk up to a precinct with a check and leave with freed protesters, especially in an era of COVID-19 complications, curfews, and with police resources spread thin. In this climate, some protesters have been held up to 72 hours before their boosters even get a chance to put up bail money. “There’s a lot of protesters who are basically disappearing into these jails,” Tyler Crawford, the director of mass defense at the National Lawyers Guild (NLG), tells TIME.

Over the past week, a cross-country web of bail fund organizations, lawyers and individual activists have taken on the tedious, painstaking work of tracking the thousands of protesters caught up in the carceral system. “When people hear about [posting] bail or being on the ground, they might think it’s all ‘lights, camera, action,’” Chaedria LaBouvier, a curator who has been working to release protesters over the last week, explains. “But it’s super unglamorous. It’s getting lawyers to try to follow people in the system. It’s working with people who have back-channel connections. It’s waiting for updates and staying by the phone for hours.”

When someone is arrested, they are taken into police custody and, after a period of time which can vary greatly, are told whether or not they have been charged with a crime. Depending on the severity of their charge (and a judgment of whether they constitute a flight risk), they may be required to pay bail in order to be released or else remain in jail until their trial. Bail can be set in the thousands, hundreds of thousands or even millions of dollars.

The bail system disproportionately harms poor people of color. According to the Marshall Project, two-thirds of the roughly 700,000 people typically in U.S. jails have not yet been convicted of a crime, and are being held mostly because they couldn’t make bail.

While bail funds have existed for hundreds of years — and played a pivotal role in the civil rights movement — they have reemerged in prominence in the last decade alongside a larger movement for bail reform. In recent years, they have fought against immigration detention in ICE centers; in recent months they’ve raised awareness about the harms of putting people in jail pre-trial during the coronavirus pandemic. “The dominant hotspots for COVID-19 are prisons, jails and detention centers,” Pilar Weiss, the director of the Community Justice Exchange, the organization that hosts the National Bail Fund Network, says. “Bringing large numbers of people into jails and keeping them in there for days is really dangerous.”

In every city which has seen protests, broad coalitions have emerged to try to protect protesters. “Because of the urgency and uniqueness of this, it’s been a nonstop 24-hour effort,” Aislinn Pulley, a co-founder of Black Lives Matter (BLM) Chicago and a co-executive director of the Chicago Torture Justice Center, says.

The first responder is often the NLG, which provides hotlines jailed protesters or their loved ones can call to seek information or representation. In Chicago, for example, volunteer NLG lawyers, along with volunteers for the Chicago Community Bond Fund (CCBF) and other organizations, were on call Saturday as police started pulling hundreds of people out of a protest downtown.

But when volunteers called central booking, they were unable to get through. 911 calls were flooding in at the rate of 2,000 every 30 minutes over the weekend, Chicago Mayor Lori Lightfoot said during a press conference on Monday, leaving police staff overwhelmed. “The sheer volume of arrests challenged the system,” CCBF executive director Sharlyn Grace says. “It made it very challenging to track people in custody and to know what to expect.” Members of the CCBF kept calling, and also monitored bond courts that are now happening over livestream due to the pandemic.

Molly Armour, a criminal defense lawyer and NLG Chicago board member, spent Saturday evening chasing down information about a legal observer who was seen being arrested that afternoon. She says it took 45 minutes of constant phone calls to even reach the police precinct. “It sounded like there was utter chaos. I was put on hold, and then the system would kick me off,” Armour says.

Eventually, an officer got on the phone and told her that the legal observer wasn’t there. In fact, they were: they later spent the night in jail and were released the next morning without charges. “It’s just raw incompetence,” Armour says.

A representative for the Chicago PD did not respond to a request for comment.

Organizations like the CCBF and Black Lives Matter Chicago also mobilized physically, sending hundreds of protesters to four precincts in the area. At 51st Street and Wentworth Avenue, a large crowd sat and chanted for hours, demanding the release of protesters. “Protests are one of the most legitimate and effective ways of making sure processes are expedited and people are treated like humans, because they have communities that are reclaiming them,” Pulley, of BLM Chicago, says.

Still, the release of some detained protesters required the intervention of Rossana Rodriguez-Sanchez, a Chicago City Council member and the alderman of the city’s 33rd Ward. “If I didn’t show up with a badge, lawyers would have never gotten in,” Rodriguez-Sanchez says. “It made me sad to think about what happens to people that don’t have access to this kind of power.”

‘You Have to Keep Calling’

In Brooklyn, prosecutors have been requesting bail for few jailed protesters, partially due to bail reform enacted earlier this year; as of Tuesday, the Brooklyn Community Bail Fund said they hadn’t paid any. But volunteers and organizers still have their hands full. LaBouvier, who describes herself as a “retired activist,” was scanning Twitter for protest news on Friday when she saw video footage of 16-year-old Taylor Barros being arrested outside of Barclays Center.

Barros had been deep in the swell of the crowd when things got violent, she tells TIME, with protesters throwing water bottles at police and police responding with pepper spray. Barros says she was giving water to those who had been pepper sprayed when she herself was sprayed, dragged to the floor and arrested. She was placed on a corrections bus with dozens of other protesters and was driven around the city for hours, with officers seeking precincts that weren’t already full.

LaBouvier reached out to Barros’ family using a phone number that Barros had shouted out upon her arrest. LaBouvier then reached out to friends at legal clinics as well as Good Call NYC, a hotline that provides those arrested with free lawyers. Using their contacts, they were able to discover that she had ended up at the 7th Precinct in downtown Manhattan.

LaBouvier arranged for Barros’ family to collect her from the precinct and worked with lawyers to secure bail money. After 8 hours in custody, Barros was given a desk appearance summons and was released. “My hands were still burning from the handcuffs,” she says. “I saw and experienced injustice in custody.”

Similar scenes played out across the nation. Many courts were not open over the weekend, meaning many protesters had to stay in jail for days before being charged.

Barros says she has been charged on five counts, including resisting arrest, which she denies. She says that defense attorneys have reached out regarding representation, and she is currently awaiting a parole interview.

The increased exposure for bail funds in this moment has not been uniformly positive. On social media, scammers have created fake Venmo accounts with misleading names to lure in would-be donors. “There have been a couple instances where a group says it’s a bail fund, and we have to make a couple calls and ask, ‘ Is this real? Do they need support?’” Weiss, of the National Bail Fund Network, says.

There has been some tension online between established bail funds who disagree on issues such as the prioritization of certain detainees for release over others. Donations have also been skewed towards organizations in big cities, leaving some bail funds, particularly in the heartland of the country, scrambling for resources.

Weiss also notes that the attention going toward the protests has pulled bail fund activists away from other work. “The folks who had legislative sessions, policy discussions, or all kinds of advocacy work [are] trying to balance that with having to spend 14 hours down at the jail,” she says.

For activists, the work does not stop when a protester is released. Outside of precincts, jail support teams provide fresh clothes, PPE, and food — many released protesters haven’t eaten for hours — as well as medical, legal and emotional support. The curfews imposed across the nation have also imposed an additional obstacle. Jail support teams may themselves be in violation of curfews, and people released late at night without a quick and safe way home could easily be re-arrested. Many organizations pay for protesters’ rides home, or rely on volunteers to make carpool runs to and from the station.

Still, flush with donations and widespread public support, bail funds are energized and ready to support further protests that may happen in the months to come. Boland, at the Minnesota Freedom Fund, says their work of tracking people through the court system and providing bail money is just beginning. “We expect these arrests are probably going to continue for some time,” he says.

“The relief of protesters is an important first step, but this system has been a problem for a long time,” he says. “It’s important we start a conversation about how we change this system, so people are not incarcerated by the size of their bank account.” 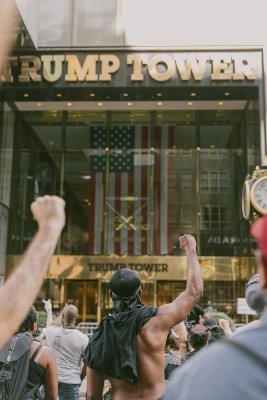 Why George Floyd's Killing Sparked an Uprising
Next Up: Editor's Pick