Can a Third Election in the Space of a Year Break Israel’s Political Deadlock?

On March 2, Israeli voters will head to the polls for an unprecedented third election in less than a year. It comes after Israel’s parliament, the Knesset, failed to agree on a governing coalition after two previous elections last April and September.

With candidates and campaign slogans largely unchanged, ideological sticking points entrenched, and voting patterns expected to remain consistent, there is no guarantee a third election will break the deadlock. Even before voting commences, the possibility of a fourth looms large.

In Israel, it’s been met with a collective shrug. Coronavirus Fears Are the Most Exciting Thing About Israel’s Boring Third Election, ran a Feb. 26 headline in the country’s Haaretz newspaper.

Still, the quagmire has serious implications. “There are major issues to deal with: war and peace, the economy, setting the budget,” says Yossi Mekelberg, an Israeli politics expert at Regent’s University in London. “When you have a Knesset that is not functioning since December 2018, the first time elections were called, there is a democratic deficit.”

It is playing out against the backdrop of the Trump Administration’s so-called Middle East Peace Plan, which was unveiled on Jan 28. The Palestinian leadership, along with much of the international community has dismissed the blueprint as a sop to Israel’s annexationist right.

The country’s latest leadership contest also comes only two weeks ahead of the date Prime Minister Benjamin Netanyahu’s corruption trial is expected to begin. Here’s what else to know:

Why is Israel having another election?

Because the winners of the two previous polls failed to garner enough parliamentary support to form a government.

In two successive elections, both Netanyahu, who leads the right-wing Likud party, and his principal opponent Benny Gantz, who heads the centrist Blue and White party, fell well short of the 61 seats required for an outright majority in Israel’s 120 seat Knesset.

In Israel’s parliamentary system, forming a government almost always depends on election winners forging coalitions with smaller parties. Traditionally those parties have coalesced around either a religious right-wing bloc or a centrist and center-left bloc.

The Blue and White party leader resolved to cobble together a “government of national unity” but that prospect also crumbled: Gantz refused to sit with Netanyahu, citing the prime minister’s corruption cases, while Likud refused to jettison its long-time leader. Parliament dissolved, setting the stage for round three.

Who are the main candidates?

The same as last time. Netanyahu last year surpassed David Ben Gurion to become Israel’s longest-serving prime minister, but a historic fifth term has so far eluded the 70-year-old, who Israelis of all political stripes refer to as “Bibi.”

His chief opponent, Gantz, is a tall but soft-spoken former Israel Defence Force (IDF) chief of staff. Gantz’s military chops make him a viable inheritor of Netanyahu’s “Mr. Security” image. He has promised to heal rifts in Israeli society and railed against the vitriol and incitement that have characterized Netanyahu’s tenure.

That’s a problem for Israelis on the left, says Regent’s Mekelberg. Gantz “doesn’t capture the imagination of anyone. Not in terms of leadership, and not in terms of proposing an alternative policy” he tells TIME. “Voters look at him and ask themselves, what’s the fuss?”

Neither candidate, conclusively. In April, Likud and Blue and White each took 35 seats. In September, Gantz shaded Netanyahu, with Blue and White winning 33 seats to Likud’s 32. Until recently, opinion polls showed Gantz maintaining a marginal lead. But the latest surveys show Blue and White’s numbers dipping below Likud’s, with more of the public also saying they perceive Netanyahu as the best candidate for Prime Minister.

What are the biggest issues?

Last year, former U.S. ambassador to Israel Daniel Shapiro told TIME that Israel’s leadership contest pit “indispensable Netanyahu,” in his self-declared role as the state’s protector, against “Bibi fatigue.” The fatigue may have grown, but the March 2 election remains yet another referendum on Netanyahu’s leadership.

Otherwise Trump’s Middle East blueprint is expected to be high on voters’ minds. Gantz’s qualified endorsement of the proposal was unsurprising, given its domestic popularity. But there are crucial differences in how the two candidates are expected to implement it.

Netanyahu is itching to make good on his promise to extend Israel’s sovereignty in the West Bank and the Jordan Valley, after the plan laid out a proposal for Israel to lay claim to about 30% of the occupied West Bank.

Gantz has said that he would only annex the portions of the conceptual map the White House plan slates for Israel with the approval of the international community and in coordination with regional actors. Given the responses the deal has elicited, that approval appears a long way off.

“Gantz would be more likely to treat the plan as a mechanism through which to attempt to gain Palestinian Authority and Jordanian buy-in,” says Michael Koplow, policy director at the U.S.-based Israel Policy Forum, which supports a two-state solution to the conflict. “Whereas Netanyahu has not displayed such concerns and views it more as a mechanism for immediate annexation.”

Israel’s Supreme Court has ruled that a transitional parliament cannot introduce major initiatives, make significant changes to laws, or pass a new budget until a new government is formed. Theoretically at least, that should take annexation off the table in the event of a continued deadlock.

An additional, unexpected, issue is Coronavirus-related panic. On Feb 26, Israel’s election committee warned people to be wary of fake news connected to the outbreak amid fears it might affect voter turnout. Israel has set up isolated booths to enable those in quarantine—currently more than 1,500—to cast a vote. On Feb. 27 an Israeli man who recently returned from Italy became the first in the country to be diagnosed outside of quarantine conditions.

How could the allegations against Benjamin Netanyahu affect the election?

Corruption allegations have plagued Netanyahu as far back as 2018. But his legal woes have grown since Israelis last headed to the polls. In November, Israel’s Attorney General indicted the prime minister on three corruption charges. His legal trial is set to commence on March 17.

These largely anticipated developments are unlikely to change the calculus of Israelis at polling booths, pollsters say, but they may impact coalition negotiations. If Netanyahu is not able to flip enough seats to give his right-wing bloc a narrow majority, attempting to prolong the deadlock would appear to be his next best strategy.

Remaining transitional prime minister would give Netanyahu “critical leverage should he decide to strike a plea bargain. It also gives him a bully pulpit and potential leverage during any appeals process,” says Israel Policy Forum’s Koplow. It even “preserves the possibility of passing Knesset legislation down the road that bars criminal proceedings for sitting prime ministers.”

How could the election results impact Israel’s relations with the U.S.?

Netanyahu and Trump have together made Israel an increasingly partisan issue in the United States, straining the complex and sometimes fraught relationship between Israelis and American Jews. Many American Jews lean Democrat, with progressives particularly disturbed by Israel’s continued occupation of the Palestinian Territories.

But Gordis says a Gantz victory would unlikely to heal the rift scored by Netanyahu and Trump. “There will be a momentary sense that Israel has been liberated from the grip of Bibi,” he tells TIME. “But what they’re going to discover very quickly is that the policies are not going to change.” 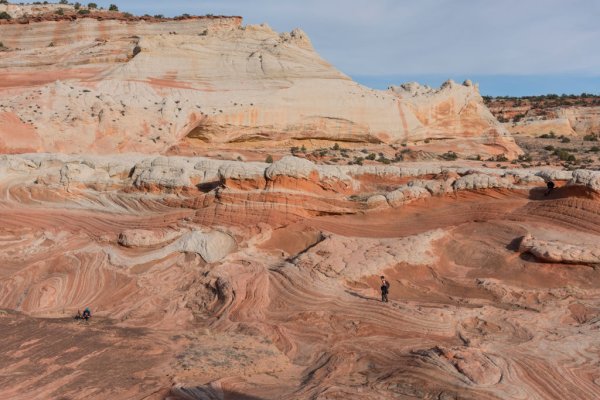 7 Female Trekkers Who Helped Reclaim Nature, One Step at a Time
Next Up: Editor's Pick