How Trump Fits Into the Long, Fraught History of the Relationship Between Israel and American Jews

President Donald Trump’s tweeted claim on Aug. 20 that American Jews who vote for Democrats show “great disloyalty” provoked disgust and dismay among many Jewish commenters in the U.S. and Israel, who accused him of invoking a centuries old anti-Semitic trope.

Trump’s tweet came just days after he urged Israel to prevent Democratic Congresswomen Rashida Tlaib and Ilhan Omar from visiting the country, claiming the progressive lawmakers hate Israel and “all Jewish people.” On Aug. 21 he doubled down on his assertion that voting for Democrats was disloyal to “Jewish people and … very disloyal to Israel,” in a speech to reporters that also made reference to a right-wing conspiracy theorist’s description of Trump’s being beloved to Israelis “like he’s the King of Israel” or the “second coming of God.”

Questions of loyalty have a long history as an anti-Semitic trope, having for hundreds of years dogged Jewish diaspora communities and foregrounded political persecution in Europe. In the U.S., similar claims of dual loyalty provided a pretext for dismissal of Jewish-American leaders’ calls for earlier intervention in the Second World War, which some isolationists saw as principally a “Jewish cause.” And as recently as March this year, senior Democrats rebuked Omar over comments many saw as an invocation of the dual-loyalty trope.

In his book, We Stand Divided: The Rift Between American Jews and Israel, on sale Sept. 10, American-born Israeli writer Daniel Gordis explores the roots of the complex relationship between the state of Israel and American Jews. In a conversation with TIME—edited for length and clarity—in the wake of Trump’s remarks, Gordis discussed how the President has further complicated that already fraught relationship and why his use of Israel as an election wedge is so dangerous.

TIME: Let’s start with President Trump’s use of the word “disloyal” in reference to American Jews who vote Democrat. Why is that term so loaded?

GORDIS: Since early modernity, Jews have faced the challenge of seemingly being accepted in the societies in which they live, but at the same time being suspected of being not entirely of those societies. The greatest example of that is of course Germany at the beginning of the 20th century, where Jews were doing very well; they were welcomed into some of the professions and making their way in academia. But underneath the surface there was always this question of, ‘Are the Jews really German? Can you really be a German, or a Frenchman, or what have you, if you’re a Jew?’ And of course, in Europe, that exploded in the early 20th century, and then with the Third Reich went beyond anything anybody had imagined. So for Jews this notion of dual loyalty has always been a red flag.

How different were the circumstances faced by Jewish people who emigrated to the U.S. in the early 20th century, in terms of this notion of dual loyalty?

It seemed that America was going to be the exception to the longstanding issue. But it was never quite that simple. Woodrow Wilson said—not just to Jews but to millions of immigrants making their way to America—that you can’t have any other nationalist loyalties and still be really American. On the surface, of course, there’s nothing problematic about that: here’s a President welcoming immigrants. But he’s saying if you want to be in, we want you all in. [Then] comes the Balfour declaration [of British support for a Jewish state], and that puts American Jews in an exceedingly difficult position. The way American Jews chose to manage the tricky road, between the declaration of a Jewish State on the one hand and their loyalty to America on the other, was a kind of soft-pedal Zionism. They gave money and made other contributions but they were not the enthusiastic embracers of Zionism many Jews in Eastern Europe became. It appeared that this worked. It seemed for a long time that Jews in America were really an exceptional diaspora community, in the sense that their situation was an exception to the hundreds-of-years-old pattern.

Trump, and some of his Jewish-American supporters, later suggested he was referring to disloyalty to Israel rather than to the United States. How do you read that?

Even if Trump did mean disloyal to Israel—which I don’t think he did—who is the President of the United States to tell American Jews about their loyalty to an entirely different country? It’s worth remembering that a couple of months ago, Trump met with a group of American Jews shortly after he had spoken to Netanyahu. He said to them, “I’ve just spoken to your prime minister.” Of course, Netanyahu is not their prime minister; they’re American citizens, not Israelis.

In We Stand Divided, you quote Israeli essayist A.B. Yehoshua, who said American Jews are “partial” Jews while Israelis are totally Jewish, while also examining depictions from writers like Amos Oz and Philip Roth of what it means to be Israeli or American Jewish. Where do Trump’s statements fit in the spectrum of views on that subject?

American Jews have a longstanding fraught relationship with Israel—for the reasons mentioned above, and in recent decades it’s gotten more complicated because of the [Israeli-Palestian] conflict. American Jews, especially the 70-something percent who vote Democrat, are looking at the relationship with Israel through almost suspicious eyes. How is Israel going to embarrass us? How is it going to compromise our progressive values? How is it going to compromise our standing with African Americans and so forth? What Trump has done is made Israel a partisan political issue. American Jews now worry that this is becoming something like abortion or gun control, that the policy needle is going to shift depending on the who the president and congress are.

Doesn’t Netanyahu bear some responsibility for that politicization? His campaign team put up pictures of him with Trump in Tel Aviv during the campaign season, and it appears that he caved to Trump saying Israel should ban Congresswomen Rashida Tlaib and Ilhan Omar from visiting.

Friends in government tell me Israel really was going to let the two Congresswomen in. They weren’t going to be happy about it, but they were going to do it, because they understood that not doing so looked terrible. A lot of people believe it was that Trump tweet that drew a line in the sand. I do think Netanyahu going to a joint session of Congress in the Obama years, when he was not wanted by Obama, was a big mistake. But at the moment he is trying to navigate uncharted waters with Trump. It’s important to remember that the typical Israeli sees the U.S. recognizing Israeli sovereignty over the Golan Heights and the moving of the embassy to Jerusalem and they think “Trump is our friend.” Portraying himself as Trump’s partner serves [Netanyahu] well in election season.

We Stand Divided discusses the differences between Israel as a “particularist” state, in its Jewishness, and the U.S. as a universalist one—but the U.S. is clearly struggling now with questions of who gets to be American. Is that dynamic changing?

America’s greatness was Emma Lazarus’ “give me your tired, your poor, your huddled masses yearning to breathe free.” America was so good to the Jews because it was fundamentally welcoming of everyone who wanted to make the best of what America had to offer. The minute you undermine America’s universalist acceptance, you undermine the very bedrock of what has made America such a safe haven for the Jews. When you couple that with the distinctly anti-Jewish sentiment of white supremacists, and with the synagogue shootings, [President Trump’s rhetoric is] making America a very different place: much less hospitable and much less safe for Jews.

As an American-born Israeli author who spent the first 40 years of his life in the U.S., how do you personally feel about Trump’s questioning of Jewish-American loyalty?

As someone who is very American and Israeli at the same time, I can say that it’s a sad, sobering and somewhat frightening time. Trump is at the core of that. Trump making Israel one of his pet issues is going to make American Jews’ relationship with Israel more fraught and more complicated and in the end, that’s just not good for the Jewish people. Jewish people have always stuck together through thick and thin, no matter what they disagreed about politically or theologically. Trump is a much greater danger to the future of the Jewish people than most people recognize. 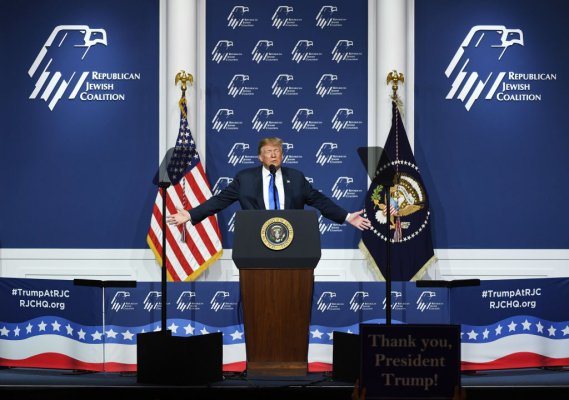 Even People Who Like Some of Trump's Policies on Israel Should Condemn His Dangerous 'Disloyalty' Comment
Next Up: Editor's Pick