It came as no surprise that the “peace plan” President Donald Trump presented at the White House on Tuesday was immediately rejected by the Palestinian leadership, whose top diplomats have long referred to it as “dead on arrival.” But perhaps mindful of the need for multilateral legitimacy, White House aides had earlier this week scrambled to garner messages of approval, or at least neutrality, from allies across the region.

In a press call with reporters on Wednesday, U.S. Ambassador to Israel David Friedman described the response the blueprint Trump unveiled had generated in the region as “extraordinarily constructive.”

To Arab leaders, that would seem to be a stretch. While some U.S. allies greeted the plan with carefully caveated approval, casting the blueprint as a “starting point” or complementing Trump’s “endeavors,” others were openly critical. After the plan’s release, the Arab world’s clearest expression of support came from Egypt, which characterized it as an effort to advance “the stability and security of the Middle East.” Meanwhile, Turkey’s foreign minister said Wednesday that the plan was “stillborn.”

The muted response was evident even before the plan was actually released. Across the Arab world, only Oman, the UAE, and Bahrain dispatched ambassadors to the White House on Tuesday as Trump laid out his vision for the Middle East. Notably absent were ambassadors from Saudi Arabia, and from Jordan and Egypt, the two Arab countries that have peace treaties with Israel.

Spearheaded by Trump’s son-in-law and special adviser Jared Kushner, the White House proposal outlines a so-called “two-state” solution to the decades-long Israeli-Palestianian conflict, affording the Palestinians a capital in a portion of East Jerusalem. But the plan also greenlights Israel’s annexation of all major West Bank settlements, upholds Israeli control over an “undivided Jerusalem,” and requires the Palestinians to relinquish far more land than in previous administrations’ mediation efforts. Democrats slammed it as “one-sided” and “delusional,” and some analysts argued that the “state” it offered the Palestinians was actually no state at all.

Here’s how leaders in the Middle East responded to the proposal.

Egypt is the only country besides Jordan to have a peace deal with Israel. For the last 12 years, Cairo has helped Israel maintain its blockade of the Gaza Strip, which is controlled by the militant group Hamas. While Egyptian-Israeli relations appeared shaky during the Muslim Brotherhood’s short tenure, they solidified again when General Abdel Fattah al-Sisi took power after a 2013 coup in 2013. Trump has forged close ties with Egypt’s authoritarian leader, reportedly describing him in 2019 as “my favorite dictator.”

On Tuesday, Egypt’s foreign ministry said in a statement that Egypt “recognizes the importance of considering the U.S. administration’s initiative” with a view to restoring the “legitimate rights” of the Palestinian people through establishing an “independent and sovereign state on the Palestinian occupied territories in accordance with international legitimacy and resolutions.”

Egypt “appreciates the continuous efforts exerted by the U.S. administration to achieve a comprehensive and just settlement of the Palestinian issue, thereby contributing to the stability and security of the Middle East, ending the Palestinian-Israeli conflict,” the foreign ministry said.

Jordan and Israel fought two wars before the pair signed a landmark peace treaty 25 years ago. But relations between the two countries have now hit an “all time low”, Jordan’s King Abdullah II said last year. Jordan borders the West Bank, and already hosts some 2 million Palesinian refugees and their descendents, according to the U.N. After the Palestinians, Jordan stands to “suffer most” from annexation, Osama Al-Sharif, an Amman-based political commentator told TIME on Saturday.

On Tuesday, Jordan reaffirmed the longstanding Arab view of the necessity for Israel to withdraw from the territory it has occupied since the Six-Day War of 1967 and warned against the “annexation of Palestinian lands.” In a statement, Jordan’s Foreign Minister Ayman Safadi said his country would continue to work with the international community and other Arab states to achieve “a just and lasting peace that meets all the legitimate rights of the Palestinian people.”

Since Trump took office in 2017, he has made Saudi Arabia the cornerstone of his strategy in the Middle East. Trump’s first overseas trip as president was to Riyadh, and in 2018 he declined to condemn Crown Prince Mohammed bin Salman over the murder of journalist Jamal Khashoggi, despite the CIA’s conclusion that the Crown Prince had ordered the killing.

Still, Saudi Arabia’s response to Trump’s plan was equivocal, at best. On Wednesday, the Kingdom’s state news agency reported that King Salman had called Palestinian Authority President Mahmoud Abbas to reassure him of Saudi Arabia’s commitment to Palestinian rights. Meanwhile, an editorial in Saudi Arabia’s government-controlled Al Arabiya paper urged the Palestinian leadership to enter direct negotiations with Israel without accepting the plan, according to Bruce Riedel, a Senior Fellow at the Center for Middle East Policy.

Saudi Arabia’s Ministry of Foreign affairs appeared to offer clearer support to the U.S. In a statement posted to Twitter, it said the Kingdom “ appreciates the efforts of President Trump’s administration to develop a comprehensive peace plan between the Palestinian and the Israeli sides, and encourages the start of direct peace negotiations between the Palestinian and Israeli sides, under the auspices of the United States.”

While the U.S. relationship with NATO-member Turkey has been strained in recent years, Trump has been keen to emphasize his personal closeness to Turkey’s President Recep Tayyip Erdogan, “a friend” he recently described as “a hell of a leader” and “a tough man, strong man.”

That didn’t stop Erdogan from coming out strongly in opposition to White House plan. On a return flight from Senegal, Erdogan told reporters on Wednesday that Trump’s blueprint “will not serve peace and resolution” in the region and called it “a plan to ignore the rights of the Palestinians and legitimise Israel’s occupation.” Noting the holiness of Jerusalem to Muslims, Erdogan added that giving the city to Israel “can never be accepted”

Turkey’s foreign minister was even more scathing: Trump’s proposal constitutes an “annexation plan that aims to kill the two-state solution and seize Palestinian lands,” he said.

The United Arab Emirates’ ambassador to the U.S., Yousef al-Otaiba, was present when Trump unveiled the plan at the White House. In a statement, he said it”offers an important starting point for a return to negotiations within a US-led international framework”.

Still, Otaiba maintained that “the only way to guarantee a lasting solution is to reach an agreement between all concerned parties.” In addition to the Israelis and Palestinians, that must include “the support of the international community.”

That support is conditional on a premise that Trump’s greenlighting of the extension of Israeli sovereignty over West Bank settlements appears to undermine. The U.N. on Tuesday restated its position that there must be a two state resolution to the conflict “within recognized borders, on the basis of the pre-1967 lines.” 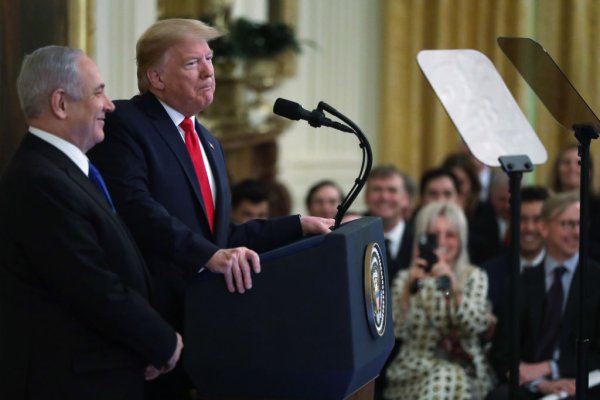