Israel Will Hold an Election for Prime Minister in September — Even Though Netanyahu Just Won the Vote. Here's Why

Just seven weeks after he claimed victory in national elections and prepared to embark on a historic fifth term, Israel’s Prime Minister Benjamin Netanyahu failed to form a government within the allotted 42-day limit, plunging the country into political turmoil and forcing Israelis to return to the polls for fresh elections this fall.

Netanyahu was on track to become the longest serving Prime Minister in Israeli history, surpassing the country’s founder David Ben-Gurion. But as the deadline loomed Wednesday night, the populist right wing leader had brought together only 60 of the 120 seats that form Israel’s parliament, or Knesset — exactly one short of a majority. The Knesset voted to dissolve itself, with Netanyahu calling another election on September 17.

The fact that it is no longer guaranteed that Netanyahu will be in power past the summer could derail President Donald Trump’s already stuttering “deal of the century,” the name his administration uses to refer to its Middle East peace plan. Senior Adviser Jared Kushner was in Jerusalem for discussions just as Netanyahu’s coalition collapsed. The political discord also virtually ends Netanyahu’s chances of passing legislation to insulate him against several corruption charges.

Here’s more on how Netanyahu got here.

Why did some of the right wing abandon Netanyahu?

Israel’s complex multi-party system means that the winner on election day always depends on the support of a coalition. Over the past decade, both right-wing nationalists and ultra-Orthodox parties could be counted on to line up behind Netanyahu’s right-wing Likud party. The sticking point this year came down to a disagreement between the two factions over whether ultra-Orthodox Jews, known as the Haredim, should have to serve in Israel’s military.

Since Israel’s formation in 1948, ultra-Orthodox men who are religious students have been exempt from being drafted into the armed forces and other forms of national service that are otherwise mandatory for Israelis. Historically, the law enabled a few hundred scholars to devote their lives to studying religious texts without interruption. But today the ultra-Orthodox constitute about 10% of Israel’s total population and male non-participation in the country’s economy and military is a source of resentment among many Israelis. It’s a problem that’s only likely to intensify: because of high birth rates, as many as one third of Israelis could be ultra-Orthodox by 2065, according to Israel’s Central Bureau of Statistics.

Why is the debate over the Ultra Orthodox happening now?

While the role of the Haredim has long been a point of contention in Israeli society, nationalist and religious parties have typically put it to one side at election time in order to form an uneasy right wing alliance. That did not happen this year largely because Avigdor Lieberman, chairman of the hardline nationalist Yisrael Beytenu (Israel Our Home party), made his support for Netanyahu contingent on the passage of a bill to end the ultra-Orthodox exemption from national service. The unamended bill’s passage would be a deal breaker for the ultra-Orthodox United Torah Judaism party, whose support Netanyahu also needed.

While Lieberman, who previously served as Netanyahu’s defense minister for two and a half years, may sincerely oppose exemptions from military service, it is also likely that the savvy politician “senses an opportunity to bring down Netanyahu,” says Yossi Mekelberg, an Israel expert at London think tank Chatham House. Even if Netanyahu were to win again, the new election’s timing — only two weeks before Netanyahu is scheduled to sit for pre-indictment hearings on a series of corruption charges — makes it near impossible for him to pass controversial legislation that would protect him from criminal prosecution.

“At the best of times this is a struggling democracy,” says Mekelberg, citing Israel’s continued occupation of the West Bank, the recently passed Nation State Law, and Netanyahu’s attempts to blunt the power of the judiciary and other rule of law institutions. He said the Knesset’s dissolution reflected broader divisions within Israel, a country “fighting for its own soul; for its own democratic character.”

Who is Avigdor Lieberman?

Born in the former Soviet Union and traditionally popular among Russian-speaking Israelis who emigrated after the Soviet Union’s collapse, Netanyahu recently characterized Lieberman as a “saboteur” and member of the “weak left,” or smolani in Hebrew. The latter is a peculiar designation, given that Lieberman is a renowned hawk known for extremist rhetoric. But smolani is a common slur in Israeli politics, where it is intended to signal naïveté and a lack of patriotism.

Lieberman quit his defense ministry post in November 2018 in protest at a cabinet’s decision to accept a ceasefire with Hamas in Gaza. He has called for the bombing of Palestinian Authority businesses in Ramallah, stated that Jewish and Zionist values are more important than democracy, and campaigned for Israeli Arabs to pledge allegiance to the state. Like Netanyahu, he has long been dogged by corruption allegations.

Although Lieberman’s intransigence could bring down Netanyahu, he has ruled out supporting the prime minister’s principal opponent Benny Gantz, whose Blue and White party won 36 Knesset seats in April, one fewer than Likud. “An entire country woke up to a somber morning of disappointment, struggling to grapple with the idea that one man’s incompetence and weakness has brought new, unnecessary and costly elections upon it,” said Gantz in a statement Thursday. “Now due to political cynicism and exploitation, we are going on the road again.”

What do the new elections mean for Trump’s Middle East plan?

After the window for forming a government closed, Netanyahu downplayed Israel’s political turmoil as “a little event” on Thursday and said he had enjoyed a “productive meeting” with Kushner, who reaffirmed “that the alliance between the United States has never been stronger.”

In reality, the Trump Administration’s troubled “deal of the century” has suffered another major blow. The Palestinian leadership has long dismissed the plan’s viability and only day’s before Kushner’s visit to Jersusalem, Jordan’s King Abdullah II restated his support for a two-state solution that would “guarantee the establishment of an independent Palestinian state with East Jerusalem as its capital.”

Israel’s political chaos raises the question of whether the Trump administration’s economic conference in Bahrain — touted as a preamble to the deal’s release — will go ahead as planned on June 25. “The Trump peace plan is on ice — maybe permanently. No one in the region is calling for it. Netanyahu didn’t want it before the April elections, and won’t want it before September’s,” Daniel Shapiro, the former U.S. ambassador to Israel told local media. Rather than “deal of the century”, Saeb Erekat, a senior Palestinian official joked after the Knesset vote, the Trump-Kushner plan should now be called “the Deal of Next Century.” 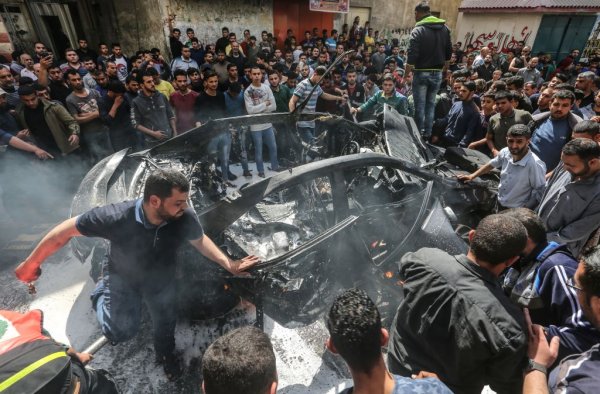 Fighting Between Israel and Gaza Escalates Into Second Day of Airstrikes
Next Up: Editor's Pick