Israel's Election Has Ended in Deadlock. Here's What Could Happen Next

Israel’s second election in fewer than six months has ended in political deadlock, leaving Prime Minister Benjamin Netanyahu facing an uncertain future and paving the way for protracted coalition negotiations. As the official count filtered in on Wednesday, no side emerged with a clear path to government.

“The era of Netanyahu is over,” claimed one opposition lawmaker as exit polls emerged Tuesday night. But while the prime minister is down, he’s not yet out. As pre-election polls had predicted, Netanyahu’s right-wing Likud party together with allied right-wing nationalist and religious parties fell well short of securing the 61 seats required for a parliamentary majority. But so did his principal opponent Benny Gantz, who leads the nominally centrist party Blue and White. With 91% of the votes counted, Blue and White had 32 seats, with Likud on 31. It remains to be seen which of the two leaders Israel’s President Reuven Rivlin, who occupies a largely ceremonial role, will ask to form a coalition.

Both, predictably, claimed they could. “In the next few days, we will begin negotiations to form a strong, Zionist government and in order to avert a dangerous, anti-Zionist government,” a weary looking Netanyahu told supporters in the Likud headquarters late Tuesday night. In Tel Aviv, Gantz said his party would “act to form a broad unity government that will express the will of the people.”

With Israel now set for coalition negotiations all options are on the table, including a third election. Here are some of the scenarios that might emerge in the coming weeks.

The most likely outcome, although it’s far from assured would be a so-called government of national unity, bringing together the two largest parties, and possibly others across the political spectrum. Gantz and secular nationalist party leader Avigdor Lieberman — who, as polls predicted, has emerged as a kingmaker — have both expressed their preference for a liberal national unity government. It would revolve around a partnership between Likud and centrist Blue and White, with or without Lieberman’s party, Yisrael Beiteinu.

There are several obstacles: the largest being Gantz’s vow not to sit in a government with Netanyahu, citing three looming corruption charges on which Israel’s attorney general has said he would indict Netanyahu, pending a hearing. Over the coming weeks Netanyahu is expected to pull out all the stops to persuade Gantz to rescind on his promise. On Wednesday evening, a senior member of Likud said the door was open for negotiations with Gantz, provided he drop his demand for the party to abandon Netanyahu.

Likud jettisoning Netanyahu is a remote possibility but there is unlikely to be any talk of a putsch until the implications of the election results are clearer. For now, the party Netanyahu has molded in his image has vowed to stick with its leader.

Political deadlock and a third election

Israel’s President Reuven Rivlin will soon decide whether to give Gantz or Netanyahu the first shot at forming a government. Given the latter’s failure to do so in May, and Blue and White’s marginal lead at the latest count, Gantz seems the likelier bet, Israel’s Haaretz suggests. Whomever is given the mandate would have 28 days to form a government, with the option to ask for a short extension.

Should Blue and White and Likud remain in political deadlock, and both sides thwart each other’s attempts to form a government, Israelis could be forced to vote in yet another election early next year.

Even in a coalition with center left Labor-Gesher, former Prime Minister Ehud Barak’s left wing Democratic Union, and with a potential support arrangement with Israel’s Joint List — a political alliance of the main Arab-dominated parties in Israel that now comprises the third largest party in Israel’s parliament — Gantz would be short of a governing majority.

A center-left alliance passing the 61-seat threshold, then, would require Ultra Orthodox parties that traditionally ally with Netanyahu to instead sit with Blue and White, Labor-Gesher and the Democratic Union. The Haredim have worked with Labor governments in the past, but the probability they will do so without Blue and White making unpalatable concessions is slim. On Wednesday, local media reports, one of the two main Ultra Orthodox parties had already vowed to stand with Likud “all the way.”

A Right-Wing Government With Lieberman or Labor-Gesher support

Both would require major about faces from their party leaders. Netanyahu’s former right hand man Lieberman sunk the prime minister’s chances of forming a government in May when he made joining his coalition conditional on the passage of a bill that would withdraw Ultra Orthodox students’ exemption from serving in Israel’s military. Lieberman’s power has increased from five Knesset seats in April to at least eight. Although Netanyahu’s vulnerability to corruption charges has led some to speculate he may offer Lieberman a split Prime Ministership, the Yisrael Beiteinu leader’s largely secular base would regard concessions to the Ultra Orthodox — whose support Netanyahu also needs — as a betrayal. In a post election speech, Lieberman doubled down on his resolve to pass the mandatory military service bill and called a unity government “the only option.”

There were rumors in the run up to the election that Labor-Gesher chairman Amir Perez could be convinced to cross the aisle. But doing so would torpedo the legitimacy of what was once Israel’s largest party. Perez has vowed not to sit in a coalition with Netanyahu — and recommitted to that vow on Wednesday: “you have nothing with which to entice us,” he said in a statement address to Netanyahu.

While the Prime Minister may yet find a way to endure, his bid to offer the hard right annexation of Palestinian territories in exchange for their support on immunity from criminal prosecution is all but dead. 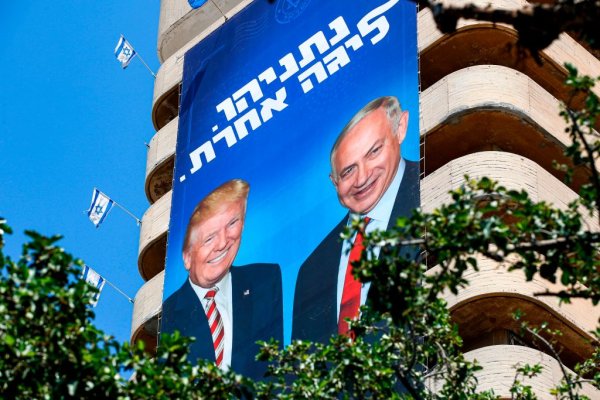 Netanyahu's Defense Treaty with Trump Is a Bad Idea. Just as Well It's Only a Gimmick
Next Up: Editor's Pick