It’s been three years in the making. But the Trump Administration’s proposal to bring peace to the Middle East, a purported solution to the decades-long Israeli-Palestinian conflict, is about to see the light of day.

Trump told reporters at the White House Monday that he would announce the plan—spearheaded by his son-in-law and senior adviser Jared Kushner—at noon the following day. He described it as a “suggestion between Israel and the Palestinians.”

The Palestinian leadership, whose top diplomats have long described the Trump Administration’s plans as “dead on arrival,” has not been invited to the White House. The project has been delayed several times, but ahead of its likely unveiling on Tuesday, here’s what to know:

What is in Trump’s deal?

Nothing has yet been confirmed. But an Israeli television report that aired Friday characterized Kushner’s plan as “the most generous proposal ever presented to Israel.” According to some Israeli media reports, it would pave the way for Israel’s annexation of virtually all settlements in the West Bank, which Israel has controlled since the Six-Day War of 1967, give Israel full sovereignty over Jerusalem, and make no major provision for returning Palestinian refugees. Trump has dismissed reports on his proposal’s contents as “purely speculative.”

The plan’s economic component is somewhat less speculative. At a June summit in Bahrain, Kushner put forward plans to create a $50-billion dollar fund to support infrastructure, business and tourism investments aimed at bolstering the Palestinian economy, as well as those of neighboring Arab States. The West Bank’s Ramallah-based leadership boycotted the June event entirely and senior Palestinian Authority diplomat Husam Zomlot told TIME afterward that it was a “conspiracy” designed to allow Israeli annexation of Palestinian territories while “blaming the Palestinians for not riding a dead political horse.”

Why did the Kushner plan take so long to be made public?

The delay is largely down to Israel’s protracted leadership crisis. After a narrow victory at the polls in April, Netanyahu failed to secure sufficient parliamentary backing to form a coalition government. A second election in September was similarly inconclusive: neither Gantz nor Netanyahu could cobble together a governing coalition. That forced an unprecedented third election, scheduled for March 2. There is no guarantee it will give either Netanyahu or Gantz a clear mandate to govern.

But critics believe the timing of the plan’s unveiling is not only a facet of the White House’s frustration with Israel’s political quagmire. Amid his own impeachment hearings on Capitol Hill, Trump’s public presentation of his plan coincides with the day Israel’s parliament is scheduled to vote on whether to grant Netanyahu immunity on three corruption charges. A U.S. official familiar with plans for the proposal’s unveiling told TIME on Monday that White House aides are considering allotting time for Netanyahu to give a speech in the White House East Room after Trump speaks on Tuesday.

Ayman Odeh, leader of a coalition of mostly Arab-Israeli parties that constitute the third-largest bloc in Israel’s parliament characterized the timing of the deal’s release as a bid to divert attention from domestic issues in the U.S. and Israel. “Trump’s annexation plan is blatant pro-Netanyahu intervention in Israeli elections,” Odeh tells TIME. “It is clear the real deal of the century is between a president facing impeachment and a prime minister facing corruption trials.”

One senior Israeli security figure agreed that the release of the plan is more oriented toward Trump’s and Netanyahu’s political gains than it is to regional peace. “This is the convergence of personal interests of the respective leaders of the United States and Israel,” says Gilead Sher, former Chief of Staff and Policy Coordinator to Prime Minister Ehud Barak and now a senior fellow at Tel Aviv’s Institute for National Security Studies. “It is not necessarily in the interests of either Israel, the United States or the Palestinians.”

How have Palestinians responded to the plan’s imminent release?

With a mixture of anger and apathy, according to observers on the ground.

Trump has said his administration talked “briefly” with the Palestinian leadership. But Palestinian Authority President Mahmoud Abbas reportedly refused to take a call from Trump, according to an account provided by an official from his office to Turkey’s Anadolu Agency on Monday. Meanwhile, Palestinian Liberation Organization Secretary-General Saeb Erekat wrote on Twitter on Sunday that “Trump is trying to make peace between Netanyahu and Gantz, in order for the three of them to dictate an apartheid Regime on the Palestinian people.”

Palestinian factions, including Fatah, are calling on Palestinians to participate in mass protests on Tuesday and Thursday, Israel’s Haaretz reports.

The Palestinian leadership has objected to Trump’s actions in the region since the beginning of his presidency. Since he took office in 2017, Trump has moved the U.S. embassy to Jerusalem, which the Palestinians view as the capital of their future state, cut funding to the U.N. agency responsible for Palestinian refugees, and in November broke with decades of U.S. precedent by stating that it no longer views Israeli settlements in the West Bank as “inconsistent with international law.”

How will Trump’s plan be received elsewhere in the Middle East?

White House officials have been trying to line up public statements of support, or at least neutrality, from major allies in the region, according to the official that spoke with TIME. Axios reports that some leaders in the Middle East are expected to issue encouraging statements.

Statements of support would constitute a diplomatic coup for the White House, but “we are in uncharted territory,” says Aman-based journalist and political commentator Osama Al-Sharif. After the Palestinians, Jordan “stands to suffer most” should Israel proceed to annex the West Bank’s Jordan Valley, Al-Sharif says.

Netanyahu has pledged to annex the Jordan Valley among other portions of the Palestinian Territories and Gantz last week said he would work to advance annexing the Jordan Valley after Israel’s elections. According to Al-Sharif, anxieties are especially acute among residents of Jordan’s East Bank, alarmed by the recent revival of far-right Israeli calls for Jordan to become an alternative homeland for Palestinians. Last month, Jordan’s King Abdullah II said that Jordanian-Israeli relations had hit an “all-time low” since the signing of a landmark peace deal between the two countries 25-years ago.

While Jordan’s economic dependence on Israel and the U.S., among other issues, makes it unlikely King Abdullah would unilaterally threaten to junk the deal, “there will be many people around the King that will say we have to react in some way, in order to try to regain legitimacy in the Jordanian street, ” says Ami Ayalon, a former head of Israel’s internal security agency, the Shin Bet, and former commander-in-chief of Israel’s Navy.

Even if the heads of Middle Eastern states can stomach a deal arrived at without consulting Palestinians, “the street in Aman, in Riyadh, in Cairo, will be totally against it,” Ayalon tells TIME. Kushner’s proposal might end up undermining the 2002 Arab peace initiative, under which the Arab world accepted the legitimacy of Israel as a Jewish state, and instead lead to “more instability,” he adds.

For Israel, “the Israeli-Palestinian conflict was on the most remote back burner for years, leaving space [to address] Iran, Syria, the Gulf, and Turkey,” former Chief of Staff Gilead Sher said. But Trump and Netanyahu “have upgraded it to stage front,” he added. 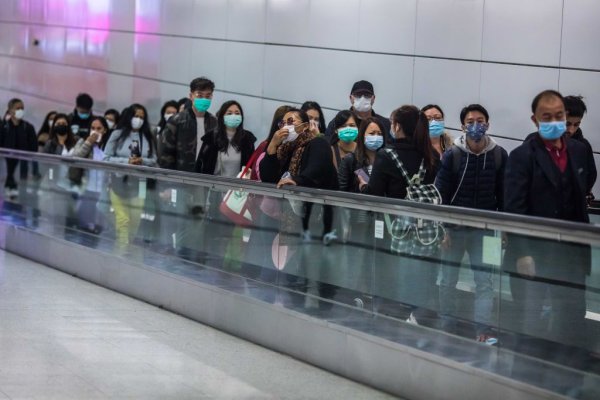 Wuhan Coronavirus Infections Could Be 30 Times Higher: Researcher
Next Up: Editor's Pick