Hey, Look at Them. Standup Guy Paul Rudd Did Not Disappoint When It Came to This Chance Encounter

Among celebrities, there are clear figures whose kindness extends from TV screens and movie theater projections into the hearts of those who follow them. And with the latest charming interaction, Paul Rudd has again confirmed he deserves his spot in this group of all-around good guys.

When Sports Illustrated writer Charlotte Wilder saw the Ant-Man star on Saturday while boarding a flight from LaGuardia Airport in New York City to Kansas City, she wasn’t sure whether or not to approach him. She had just finished binge-watching Living With Yourself, Rudd’s Netflix series. “I thought his performance was so amazing and he brought such a spirit to it,” Wilder tells TIME. “It’s so strange when you spend a week with someone who has no idea you exist — I mean, that’s the nature of TV and entertainment.”

Beyond Living With Yourself, Wilder always enjoyed Rudd’s movies, including Clueless, Knocked Up, Anchorman and I Love You, Man, the latter of which made her start “cry laughing” in the theater. “My dad and I used to quote his lines from movies back and forth to each other,” she says. “I was very moved to see him in person.”

But on the plane, Wilder decided to go ahead and say hello to Rudd, who was headed to the AFC championship game between the Kansas City Chiefs and the Tennessee Titans the next day. As fate would have it, the reporter was headed to the game, too. And Wilder’s Twitter was blowing up after a tweet she shared about spotting Rudd went viral. (The first tweet of what became a narrative thread has 219,000 likes as of Tuesday morning.) People following along on Twitter encouraged her to say hello. “I felt like I would be letting people down if I didn’t at least talk to him,” Wilder says.

Wilder walked over to Rudd’s seat on the plane, said hello and complimented his performance in Living With Yourself, adding that she had wanted to reference his viral moment from an interview on the show Hot Ones by saying “hey, look at us.” “He started laughing,” she says. “I think I’ve used that gif for every single sporting event since that happened.”

The next day, Rudd’s favorite, the Chiefs, won the game — and a spot in the 2020 Super Bowl. Wilder, who was at the game to cover the Titans, was hurrying to finish a story about the game when she got wind that Rudd was still around. So she caught up with him in the Chiefs’ locker room. Much to Wilder’s delight, Rudd remembered her. “He looks around, he kind of smiles at me and goes, ‘hey, look at us,'” she says.

“He was a really good sport,” she says. As for why so many followed along on Twitter — the final installment, a picture of the two of them in the Chiefs locker room, has almost 60,000 likes — Wilder has a clear answer. “I think people are really relieved when celebrities that they think are going to be lovely people, or gracious, or whose spirit seems to come through in their work, are actually that way as people too.” 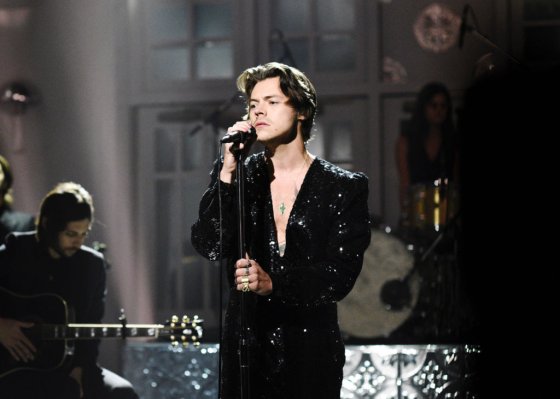 Harry Styles Lookalike Casually Pops Out of a Starbucks Drive-Through Window and Into Our Lives
Next Up: Editor's Pick