Warning: This post contains spoilers for Ant-Man and the Wasp and Avengers: Infinity War.

Fans have been yearning for any information about the future of the franchise after the devastating Avengers: Infinity War premiered earlier this summer. At the end of that movie, baddie Thanos snapped his fingers and destroyed half of all life in the universe. That means that half our heroes disintegrated and disappeared. Ant-Man and the Wasp is the first Marvel movie to hit theaters after that massive cliffhanger as well as the Avengers: Infinity War post-credits scene, which hinted at the long-awaited arrival of a certain superhero.

Scene 1: Ant-Man is stuck in the Quantum Realm

We find out during the movie that Scott Lang (a.k.a. Ant-Man, played by Paul Rudd) was under house arrest following his violation of the Sokovia Accords in Captain America: Civil War. (He took the deal to be with his daughter, while Captain America, Black Widow and the rest of that crew remain on the lam.)

But he’s released from house arrest at the end of the movie and free to participate in experiments with his girlfriend Hope (Evangeline Lilly as The Wasp), her father Hank Pym (Michael Douglas) and her mother Janet (Michelle Pfeiffer), recently saved from the Quantum Realm. In the first post-credits scene, the trio sends Scott into the Quantum Realm in order to recover some data.

But while Scott is shrunk in miniature, Thanos destroys half of all life in the universe. The audience watches Hope, Hank and Janet float away. Scott, meanwhile, is stuck in the Quantum Realm.

Scene 2: The Ant on the Drums

Marvel often ends its movies with a comic teaser. Don’t expect this one to give you any information about Thanos or even how Scott will escape the Quantum realm without Hope and her parents to help him.

In the second post-credits scene for Ant-Man and the Wasp, a gigantic ant who has been wearing Scott’s ankle bracelet while he sneaks out on adventures with Hope throughout the movie, plays the drums in Scott’s house. 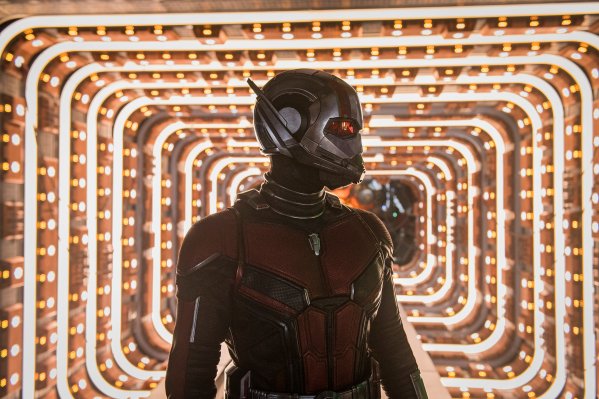 We Finally Know Why Ant-Man Wasn’t in Avengers: Infinity War
Next Up: Editor's Pick