There’s something about the angst of white-collar men that lends itself to magic realism. From Kafka’s The Metamorphosis and It’s a Wonderful Life to Midnight in Paris and disgruntled dad Lester Burnham recounting his own demise from beyond the grave in American Beauty, such quotidian dissatisfaction has catalyzed at least a century’s worth of fantastical odysseys. Whether it’s because so many of us identify with the urge to escape the grind through supernatural means or because those who do are overrepresented in Hollywood and book publishing, we can’t seem to get enough of these stories. On Oct. 18, Netflix unveils another one: the intermittently entertaining but ultimately hollow Paul Rudd vehicle Living With Yourself.

Seemingly premised on Rudd’s contradictory persona—often cast as a “regular guy,” he is in fact a handsome, charming 50-year-old who doesn’t look a day over 30—the eight-episode series introduces his protagonist Miles as a man in a miserable rut. His marriage has grown tense and distant. After years of saving for fertility treatments, he disappoints his wife Kate (Aisling Bea) by repeatedly canceling sperm-analysis appointments that would revive their efforts to conceive. Meanwhile, Miles is so burned out at his advertising job that when it’s time for him to present a pitch, he simply saunters to the head of the conference table and announces, “I don’t have anything.” That sums up the way he feels about his life as a whole, despite its many suburban comforts. He can’t even sneak into his house after a night at the bar without smashing into a credenza.

Too exhausted, lazy or perhaps clinically depressed (the show is mostly uninterested in brain chemistry) to make tough changes, he seizes the first easy, if expensive, option that presents itself. Over drinks, a formerly unimpressive colleague (You’re the Worst standout Desmin Borges) who’s suddenly dominating the boardroom lets Miles in on his secret— a “highly exclusive” spa treatment that radically rejuvenates clients, inside and out. Without consulting Kate, Miles drains the fertility savings, hands over $50,000 in cash in the basement of a strip mall and, most disconcertingly, dons an adult diaper in preparation for the procedure. Little does he know that the spa’s proprietors are preparing to clone him, kill—er, “deactivate”—the schlumpy original Miles, bury him and release his hot, cheerful, freshly baked double into Miles’ old life. The plan goes awry when a barely breathing Miles 1.0 wakes up underground and claws his way out of the grave. Now, there are two of him.

Rudd and Aisling Bea in 'Living With Yourself'
Eric Liebowitz/Netflix

The internal logic of this sci-fi scenario isn’t perfect. (A bit of muddled commentary on American prejudices, via a pair of Asian-American spa proprietors who affect broken, accented English for their customers’ benefit, just plain backfires.) In order for Miles 2.0 to seamlessly integrate into Miles 1.0’s life—where he is, inevitably, a superior husband, half-brother (to a kooky artist played by Alia Shawkat) and employee—he must possess all of the latter’s knowledge, memories and emotional ties. Yet wouldn’t a clone who feels as though he’s experienced everything Miles 1.0 has experienced also feel just as bitter and beaten down as his predecessor, even if his body was brand new? This catch-22 would be easy to overlook if it at least led the show to some interesting philosophical questions: Is the self a single consciousness confined to one discrete body, for example, or are both versions of Miles essentially the same person?

Creator Timothy Greenberg, a former Daily Show executive producer, would rather track the chaos that ensues as two men attempt to occupy the same life. There are slapstick elements to this; the Mileses fight like brothers, and 1.0’s discomfort in his own skin manifests itself in lots of tripping and falling. The power balance shifts, with 2.0 serving alternately as a threat to 1.0 and a stand-in who enables 1.0 to stay home from work and pound out that screenplay he’s always wanted to write. Since 2.0 is programmed to love Kate, just like the prototype, an uncanny love triangle ensues.

The show is almost never unpleasant to watch, thanks to fast-paced storytelling as well as appealing performances from Rudd and Bea (an Irish actor and comedian who broke through to American audiences this year as the writer and star of Hulu’s well-received British import This Way Up). It just seems like a waste of a premise that could have gone so much deeper and evolved into something so much stranger. Instead, Greenberg teases depth and ingenuity that he never quite delivers. Like the authors of so many other surreal-male-midlife-crisis narratives, he overestimates how compelling its protagonist’s predicament is, then resolves it into a lesson in appreciating what one has. (He also oversimplifies the needs and desires of the woman in his life, even after devoting a full episode to her perspective.) And, as in so many other high-profile Netflix projects—Dead to Me, Maniac, The Politician—just about every episode ends on a cliffhanger. Sadly, in the case of Living With Yourself, a show designed for binge viewing never proves binge-worthy. 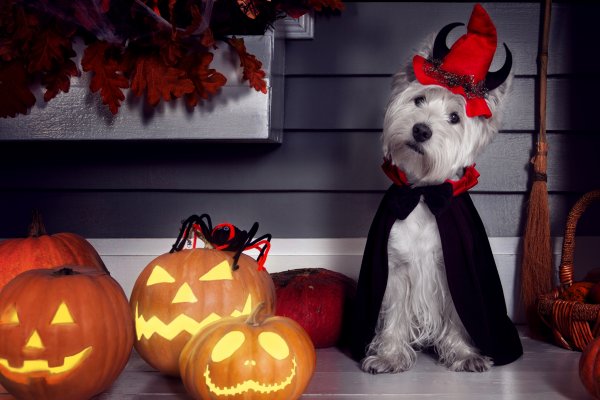 Everyone Has the Most Positively Charming Jokes About This Spirited All-Dog Halloween Picture
Next Up: Editor's Pick