By Madeleine Carlisle and Alana Abramson

House Speaker Nancy Pelosi on Wednesday selected seven lawmakers to serve as impeachment managers in the Senate trial against President Donald Trump, essentially acting as prosecutors in the trial and making the case for why he should be removed from office.

The House voted on a resolution Wednesday afternoon authorizing the managers to send the articles to the Senate, setting in motion a trial on whether the charges warrant Trump’s conviction and removal from office.

The group of lawmakers selected by House Speaker Nancy Pelosi to serve as the impeachment managers in the Senate trial against President Trump walk through the Capitol's National Statuary Hall to present physical copies of the impeachment articles to the Senate in Washington, D.C., on Jan. 15.
Gabriella Demczuk for TIME

“I’m very proud and honored that these seven members, distinguished members, have accepted this serious responsibility… to protect and defend, for the people, defending our democracy,” she said at a press conference Wednesday.

The House of Representatives impeached the President in December on two counts of “high crimes and misdemeanors”: abuse of power and obstruction of Congress. “An impeachment that will last forever,” Pelosi said on Wednesday.

Pelosi had delayed delivering the articles to the Senate, promising she would deliver the articles once she felt they would get a fair trial in the Senate. Pelosi addressed this delay on Wednesday, arguing it has been the Democrats’ “friend” because it allowed for the discovery of more evidence. But Senate Majority Leader Mitch McConnell, who has been open about working with the White House, has yet to promise the trial would include witnesses, and the rules of the trial have yet to be announced.

“This is a test of the Constitution,” Rep. Nadler said. “The Senate is intended by the Constitution to conduct a fair trial. The American people know that in a trial you permit witnesses, you present the evidence.”

In response to the announcement, White House Press Secretary Stephanie Grisham said, “The Speaker lied when she claimed this was urgent and vital to national security because when the articles passed, she held them for an entire month in an egregious effort to garner political support. She failed and the naming of these managers does not change a single thing.”

What is an impeachment manager?

Impeachment managers effectively act as prosecutors in the Senate impeachment trial, laying out the facts the House discovered in its impeachment inquiry and arguing for the President’s removal from office.

The President’s legal team will act as the effective defense, and the managers and the legal team will each try to sway the Senators — the effective jury — to vote their way. Trump’s personal attorney Jay Sekulow confirmed to TIME that he will assist a legal team led by White House Counsel Pat Cippollone. Chief Justice John Roberts will preside over the trial, though Senators can vote to overrule his decisions. Two thirds of the Senate, or 67 members, must vote to convict the President for him to be removed from office. This has never happened in the history of the U.S.

After the House approves the resolution to send the articles of impeachment to the Senate, the managers, the House Clerk and the House Sergeant at Arms will walk through the Capitol to present physical copies of the impeachment articles to the Secretary of the Senate.

The Senate has until 1 p.m. on the day after the articles have been presented to them to start to consider them. McConnell has said he expects the trial to begin in full-swing on Jan. 21, and more ceremonial proceedings will take place this week.

But much about the trial is still unknown, and McConnell has still not promised to call witnesses or allow for the inclusion of new evidence, much to Democrats’ frustration. On Tuesday, House Democrats released new evidence they had uncovered, including information from Lev Parnas, an associate of Trump’s personal attorney Rudy Giuliani. McConnell has said he has enough Senate votes to pass a package similar to that in the Clinton impeachment, which did not automatically include witnesses.

The seven impeachment managers will be as follows:

The California Representative and close Pelosi confidante will unsurprisingly serve as the lead impeachment manager. As the Chairman of the Intelligence Committee, Schiff, reputed for his unflappable demeanor, has been the public face of the House’s impeachment inquiry and is intimately aware of the facts of the case. The 10th term congressman was once a federal prosecutor, and prosecuted the first FBI agent ever indicted for espionage.

Nadler chairs the House Judiciary Committee, which reviewed the evidence found by the Intelligence Committee and drafted the two articles of impeachment against the President. Like Schiff, he’ll know the facts of the case better than nearly anybody. The New York Representative has served in Congress in 1992.

Another New York Representative, Jeffries is something of a rising star in the Democratic party. He chairs the House Democratic Caucus and sits on the Judiciary Committee, and some theorize Jeffries could someday be a Pelosi successor.

Demings is one of two Democratic lawmakers to sit on both the the Intelligence Committee and the Judiciary Committee, and thus like Schiff and Nadler knows the facts of the impeachment inquiry well. She’s only in her second term of Congress, and previously served in the Orlando Police Department for 27 years.

Garcia is a freshman member of Congress who sits on the House Judiciary Committee. She was the first Latina ever to represent her district, and previously served in the Texas state Senate and was the City Controller for Houston.

Crow is another freshman Democrat who is considered a rising star in the party. A veteran of the Wars in Iraq and Afghanistan, he flipped a long-held Republican seat in the 2018 midterms. He sits on the House Armed Services Committee and is viewed as an authority on national security within the Democratic Caucus.

– With reporting by Tessa Berenson/Washington

Write to Madeleine Carlisle at madeleine.carlisle@time.com and Alana Abramson at Alana.Abramson@time.com. 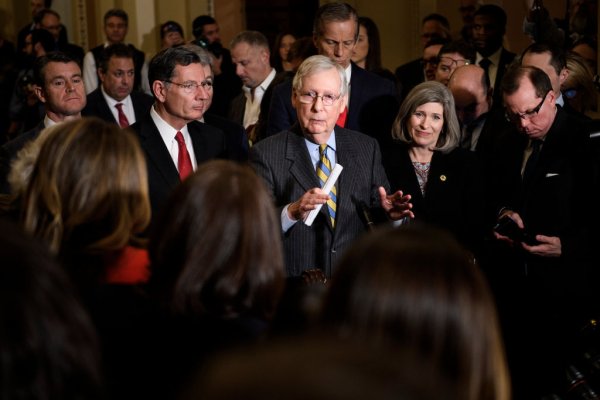 Senate Impeachment Trial Begins: What to Know
Next Up: Editor's Pick