The Democrats' Pointman on Impeachment

The hardest job in Washington right now belongs to a straight-talking New Yorker in his 70s. And it’s not President Donald Trump.

As Trump ramps up his defiance of House Democratic investigations, Judiciary Committee chairman Jerrold Nadler, 71, is a key player in the fight. Nadler’s committee issued the first subpoena for special counsel Robert Mueller’s full, unredacted report into Russian interference in the 2016 election, then voted to hold Attorney General William Barr in contempt when he didn’t deliver it. The committee will likely do the same with former White House counsel Don McGahn, who failed to appear for testimony on May 21. Nadler’s committee may even subpoena Mueller himself.

But Nadler faces a dilemma. Liberals in the House Democratic caucus want an impeachment inquiry into Trump. Taking that first step, they argue, could help Congress in its looming court battle against the White House over the Legislative Branch’s investigative powers and would please the party’s base. At the same time, House Speaker Nancy Pelosi, who is effectively Nadler’s boss, has been clear about the political risks of rushing to judgment amid polls showing that centrists and independents are cooling to the idea of impeachment. Nadler, who chairs the committee that would ultimately oversee the proceedings, is caught in the middle.

The challenge is all the greater because of the stakes. The confrontation is a test of congressional power, and Nadler has been incensed by the “constitutional crisis” he says Trump’s blanket defiance represents. “Our fight is not just about the Mueller report,” he said on May 8. “Our fight is about defending the rights of Congress, as an independent branch, to hold the President accountable.” He’s cognizant of Pelosi’s concerns that putting impeachment ahead of investigations could hurt Democrats’ 2020 electoral prospects on the Hill and at the White House. Balancing those pressures has become the biggest test of the New Yorker’s tenure in Congress.

Being in the spotlight is something of a novelty for Nadler. The son of a chicken farmer, Nadler came up through the state assembly before running for Congress in a special election in 1992. Speaking to the New York Times after his victory, then New York assembly speaker Saul Weprin categorized him as a “nudnik,” the Yiddish word for nag. “When he has something on his mind that he wants to get done, he’ll never leave you alone,” Weprin said.

On his way up, Nadler got to know and dislike Trump. The pair’s feud over Upper West Side real estate deals dates back decades, and Nadler makes no bones about his animosity toward Trump. “We’ve never had a liar like this in the White House,” he told TIME in December.

This isn’t Nadler’s first brush with the question of impeachment either. Ironically, his national profile rose during his opposition to President Bill Clinton’s impeachment two decades ago. But it’s only recently that Nadler assumed a starring role in such a drama. He became Judiciary chairman by surprise, after his predecessor, then ranking member John Conyers, resigned from Congress amid sexual-harassment allegations in 2017.

Few think Nadler’s personal history with the President or his experience under Clinton would be enough to make him buck Pelosi if she continues to resist calls for an impeachment inquiry. But the Speaker, who said on May 22 that Trump is engaging in a “cover-up,” is feeling the pressure too. Frustration among liberal House members over her deliberative approach has been growing for several weeks and is especially acute on the Judiciary Committee itself, half a dozen lawmakers and aides tell TIME. An increasing number of members now believe that kick-starting the impeachment process with an inquiry is necessary.

That frustration erupted during closed-door meetings on May 20, when several committee members made the case to Pelosi that the party had to hold Trump accountable, to no avail. An impeachment inquiry “would get more and more people to understand [Trump] should be impeached,” says Representative Steve Cohen of Tennessee, who challenged Pelosi.

Nadler met with Pelosi and other top leadership in a separate meeting later that night, where he relayed the members’ case about the need for more action, but she still would not budge. “There is a suspicion that Nadler, based on some of his statements, agrees with us–but he’s in a tough spot just because of his position with the leadership,” says one committee member who requested anonymity to discuss internal dynamics.

Some committee members say Nadler is managing the competing pressures well. “The committee definitely takes into consideration members like myself,” says Representative Lucy McBath, who flipped a historically conservative district in Georgia in November. Representative Pramila Jayapal, a progressive who supports an impeachment inquiry, says she understands Nadler’s political calculus. “He’s got to make sure the whole committee is comfortable,” she says.

Ultimately, the Democrats will need to find a unified position on impeachment. But until then, Nadler is in the hot seat.• 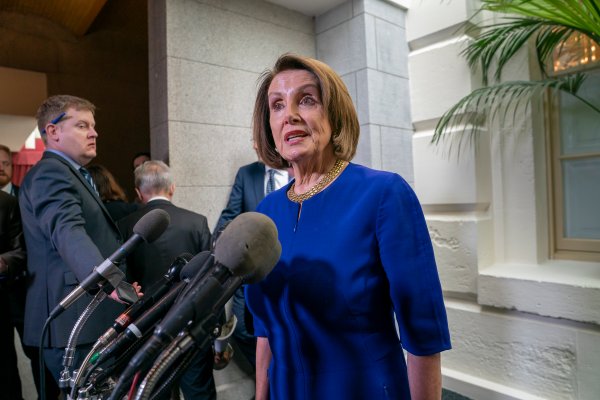 How Nancy Pelosi's Meeting With Trump Went Down
Next Up: Editor's Pick