The House of Representatives voted almost entirely along party lines on Wednesday to advance the two articles of impeachment against President Donald Trump, paving the path, quite literally, for the articles to proceed to the upper chamber.

After physically transmitting the articles from the House to the Senate on Wednesday evening, Rep. Adam Schiff, who House Speaker Nancy Pelosi has appointed lead impeachment manager, read them aloud on the Senate floor Thursday afternoon. On Thursday afternoon, Chief Justice John Roberts, who will preside over the trial, was sworn in, as were the present Senators, who will serve as jurors.

These developments come after a nearly month-long delay, during which Democrats in both chambers unsuccessfully pushed Senate Majority Leader Mitch McConnell to guarantee witness testimony and document subpoenas as part of the Senate trial. The vote on the resolution, which formalized the appointment of the seven impeachment managers selected by House Speaker Nancy Pelosi, was almost entirely along party lines, reflecting the partisan tenors that have characterized the process.

The trial will start in earnest Tuesday. It is still unclear exactly how the trial will develop, although McConnell has provided a few hints.

While there is still a lot we don’t know, TIME reporters have read through Senate procedures to explain how the process has unfolded so far and what happens next.

Why does the House have to vote to send the articles of impeachment to the Senate, if they already voted to impeach Trump?

By impeaching Trump, the House is simply charging him with misconduct; specifically, in Trump’s case, with abusing the power of his office and obstructing Congress. In order for him to be removed from office, those charges need to be transmitted to the Senate for a trial. House-appointed representatives, or impeachment managers, will make the case to the Senate why those charges warrant conviction and removal.

Pelosi announced Wednesday that she had selected seven lawmakers to serve as managers: Schiff and Jerrold Nadler – who chair, respectively, the House Select Permanent Committee on Intelligence and the House Judiciary Committee and have held prominent roles in the process so far – and Reps. Jason Crow, Val Demings, Sylvia Garcia, Hakeem Jeffries, and Zoe Lofgren.

Also on Wednesday, the House voted on a resolution, which is slightly over one page long, that essentially informs the Senate that these lawmakers have been appointed as managers to make this case, and, “in connection with the preparation and conduct of the trial, exhibit the articles of impeachment to the Senate and take all other actions necessary.”

Now that the House has passed the resolution, the managers, led by the House Clerk and the House Sergeant at Arms, proceeded through the Capitol Wednesday to present them to the Secretary of the Senate.

How soon could the trial start?

Senate procedure dictates that after the House passes its resolution, the managers are expected to carry physical copies of the articles of impeachment over to the Senate, where they will read the articles.

Under Senate impeachment rules, the chamber has until 1 p.m. the day after the articles are presented to the Senate to begin considering them. McConnell said on Tuesday he expects the trial will start in earnest on Jan. 21 by passing the rules that will govern it, although ceremonial items, like swearing in the necessary parties an Senators signing a book joining other Senators who have bee part of impeachments since 1986 onward, could occur this week. All 100 Senators will officially need to be sworn in as jurors, as will Chief Justice John Roberts, who is expected to preside over the trial.

Who are the key players in the trial?

There are four groups of people to watch during the trial: the House impeachment managers, Trump’s defense team, the 100 Senators and Roberts.

In trial speak, the House impeachment managers are essentially the prosecutors, arguing why their evidence is damning enough to warrant Trump’s removal from office. Trump’s team of attorneys is the defense, arguing why it isn’t. The Senators are the jury, who will weigh the evidence and make the ultimate call. And Roberts will be the one presiding over the trial. There is a provision, though, by which Senators can overrule Roberts, meaning they never full cede control over their chamber to a member of a co-equal branch of government.

Pelosi had been coy about revealing the list of managers until Tuesday morning, keeping the selection close to the vest.

Like Pelosi, the White House Counsel’s office has also been reticent about revealing its team. Trump’s personal attorney Jay Sekulow told TIME that White House Counsel Pat Cippollone will be leading the defense team, and that he, Sekulow, will be assisting.

What exactly happens during an impeachment trial?

Put simply, Senators — now sworn in as jurors — hear evidence and arguments presented by the prosecution (the House) and the defense (the White House) to determine if the President should be removed from office.

But it is the Senate that determines what that will actually look like. Aside from stipulating that Senators be sworn in under oath and that the Chief Justice preside, the Constitution provides little clarity in terms of trial structure.

Consequently, one of the first things the Senate must do after the trial has commenced is to pass a rules package laying out that structure. This rules package has already been a source of intra-chamber controversy because Democrats wanted it to include testimony from witnesses. McConnell has said he has the votes to pass a rules package similar to the one the Senate employed during Clinton’s impeachment trial — which does not automatically include that testimony — although he has not released the actual text.

Will we learn anything new, or is the trial mostly just both sides repeating the arguments we have already heard?

New information came out on Tuesday as a result of the House’s inquiry. House Democrats announced Tuesday afternoon that they had received new documents from Lev Parnas, an associate of Trump’s personal attorney Rudy Giuliani, and would be submitting them as part of the evidence underlying the articles.

Included in the information Parnas submitted is that Parnas was in constant communication with Giuliani and Ukrainian officials, and the extent of their campaign to remove Ambassador Marie Yovanovitch, who was abruptly recalled from her post last May. One of the documents released is a handwritten note on stationery from the Ritz-Carlton Hotel in Vienna, that reads “get Zalensky to Annonce that the Biden case will be Investigated.”

With just 24 hours until Democrats would officially relinquish the articles of impeachment to the Senate, party leaders used the evidence to bolster their claims that the White House needed to comply with other document requests they had evaded. “All of this new evidence confirms what we already know: the President and his associates pressured Ukrainian officials to announce investigations that would benefit the President politically,” the four Democratic chairmen who led the inquiry said in a joint statement. There cannot be a full and fair trial in the Senate without the documents that President Trump is refusing to provide to Congress.”

While more information regarding the House inquiry could come to light, the trial will also be the first time that Trump’s defense team officially makes their case during the impeachment process because they declined that opportunity in the House. But the team has been mum if there will be new revelations and what evidence Trump’s team can offer to back them up. Presumably, this would force another debate about witnesses and documents.

Most likely, any new information that emerges would result from witness testimony, and that is hardly a given. Democrats have identified four key witnesses they want to hear from who did not appear before the House: former National Security Adviser John Bolton, acting White House Chief of Staff Mick Mulvaney, and White House officials Michael Duffey and Robert Blair. Bolton said earlier this month he will testify pursuant to a subpoena.

But requesting witness testimony would require 51 votes, which means four Republican Senators would have to break with their party. While some moderate Senators, like Susan Collins and Mitt Romney, have already said they want to hear from witnesses, it is still unclear if there will ultimately be enough votes.

Some Republicans have argued that if Democrats are able to call their requested witnesses, then Republicans should be able to do the same. Some of Trump’s strongest allies in particular are requesting testimony from Joe Biden’s son Hunter, who sat on the board of Burisma, the Ukrainian gas company that Trump was pushing the Ukrainian government to investigate in the July phone call that led to his impeachment.

Still, there remains an uneasiness among Republicans to veer off their mandate in considering the actual charges against the President. While they personally may want to know just how Hunter Biden won a lucrative consulting contract in Ukraine, they also don’t want to turn the Senate into a partisan sideshow over nepotism.

After witnesses are called — or if the votes to request witnesses are unsuccessful — Senators will proceed to deliberating on the verdict behind closed doors.

How long will the trial last?

What happens if Trump is convicted?

The Senate has never voted to convict a sitting President, and it’s unlikely they will now, given the chamber’s Republican majority. But if two-thirds of the Senate finds Trump guilty and worthy of conviction, he will be removed from office.

What happens if Trump is acquitted?

If, as expected, there are not 67 votes to convict Trump, the trial concludes without his removal from office. But a conviction does not erase the House’s work. As Pelosi touted recently, Trump will still have a permanent asterisk denoting impeachment as part of his legacy. “Ten months from now we will have an election if we don’t have him removed sooner,” Pelosi said last Sunday. “But, again, he’ll be impeached forever.”

—With reporting by Tessa Berenson and Vera Bergengruen/Washington 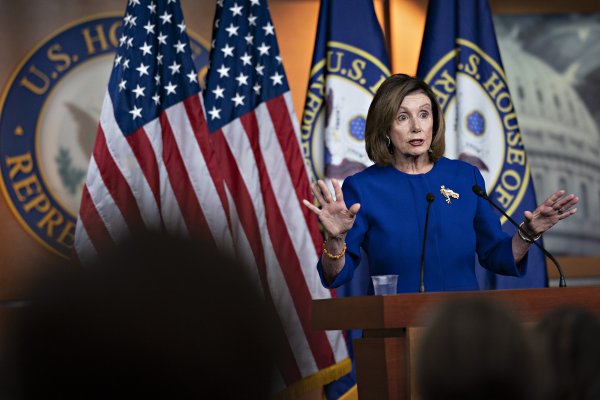 Path Forward on Impeachment
Next Up: Editor's Pick