'Baguettes, Umbrellas, and Lightsabers.' Here's the Whole Story Behind the Ben Solo Challenge Inspired by Star Wars: The Rise of Skywalker

Warning: This post contains spoilers for Star Wars: The Rise of Skywalker.

In the midst of the third act of The Rise of Skywalker, there comes a moment when it seems like the luck of our two heroes, Rey (Daisy Ridley) and Ben Solo (Adam Driver), may finally run out. But, of course, this is Star Wars, so with the fate of the galaxy hanging in the balance, the pair finds a way to utilize the Force connection they share throughout the sequel trilogy to turn the tables on the Dark Side.

And thus, the now-viral Ben Solo challenge was born.

Inspired by the scene in which Rey sneakily teleports one of her two lightsabers to an unarmed Ben on the secret Sith planet of Exegol, the Ben Solo challenge calls for participants to reenact the moment when Ben draws the lightsaber from behind his back and gives a cheeky shrug before going ham on the Knights of Ren.

Considering his father, Han Solo (Harrison Ford), once shrugged off his enemies in a similar manner, the move seems to symbolize that Ben has fully returned to the Light Side following his time as Kylo Ren. Naturally, it immediately caught the attention of fans.

“The shrug is just such a Han Solo-Harrison Ford moment and seeing someone as talented as Adam Driver do that…it’s such a spot-on impression of that moment and that character,” Twitter user Mike loves the shrug, the originator of the challenge, tells TIME.

Here’s everything you need to know about the fan-fueled Ben Solo challenge.

How was the Ben Solo challenge created?

The Ben Solo challenge first surfaced when Mike loves the shrug posted a video of himself performing the hidden lightsaber move — with heavy emphasis on Driver’s smug little shoulder lift — on TikTok. But it didn’t truly take off until he shared it on Twitter that same day.

“I now present the #BenSoloChallenge,” he wrote, sparking a movement to perfect the shrug heard round the galaxy.

Since its Dec. 20 release, The Rise of Skywalker has been met with a polarizing response, with some critics and fans panning the final chapter in the Skywalker saga for scraping much of the lore introduced in Rian Johnson’s The Last Jedi while others have praised it for the very same reason. For his part, director J.J. Abrams told Vanity Fair that he thinks both the detractors and supporters have a right to express their opinions.

Mike tells TIME that he launched the challenge in hopes of counteracting some of the negative reactions to The Rise of Skywalker that he was seeing online.

“It’s not a secret that a lot of the fan response to the new Star Wars has been really negative,” he says. “So I wanted to take a moment that seems to be universally loved, that everyone seems to really enjoy, take that moment and just let everyone have a go.”

Ty Black (Twitter user “ TY”), who created her own version of the scene with a glass of wine, adds that she views the moment as a bright light for fans who were upset by Ben’s death in the movie.

“Ben Solo dying, it was very tragic for a lot of us and it feels kind of like we lost a loved one,” she tells TIME. “So a lot of us have been grieving and this was the part in the film that felt like it was very Adam Driver, it was the Ben Solo we’ve been waiting for since The Force Awakens and it was an homage to his dad, Han Solo.”

How did the Ben Solo challenge go viral?

After Mike posted his original video on Twitter on Monday, it quickly began to garner attention. As of Tuesday afternoon, it had been liked over 13,000 times and retweeted nearly 2,000. It has also inspired numerous people to rise to the challenge of creating their own videos — even if they don’t own their own lightsabers.

“I expect to see people pulling baguettes and umbrellas from behind their backs,” Mike tweeted in response to his original video. “Don’t let me down.”

Luckily, his fellow Star Wars fans have held their own. From brooms to swords, substitute lightsabers are popping up all over the Ben Solo challenge landscape and proving that anyone can be the hero of their own Skywalker saga.

Black tells TIME that she decided to use a glass of wine in her video after seeing one of her friends do it with a bottle of Mountain Dew, but ended up pouring some wine down her back in the process.

“I had just come home from a really rough day at work and I poured myself a glass of wine and kind of looked at and was like, ‘This could be funny,'” she says. “So that’s what I did.”

Mike says that his personal favorite recreation so far has been one made by his friend Jake (Twitter user Jundland Jake), which has already been watched more times than his own. “He actually looks quite a lot like Adam Driver so his has been really popular,” he tells TIME. “It’s actually got more views than mine, which I’m not bitter about.”

See some more of the best Ben Solo challenge videos below. 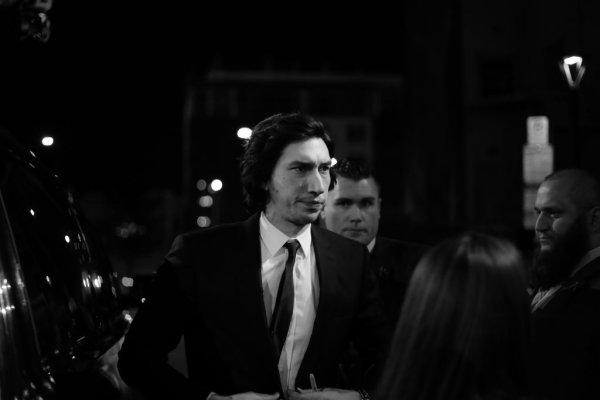 The Undeniable Force of the Ben Solo Challenge Is Here
Next Up: Editor's Pick